By Zhanna Shayakhmetova in Nation on 30 December 2022

President Tokayev met with Elvira Azimova, who will serve as the Chair of the Constitutional Court from January 1, 2023. Photo credit: Akorda.

The Kazakh Senate unanimously approved the President’s nomination of Azimova at a Dec. 29 meeting of the Senate. The Senate also supported Lastayev’s candidacy.

“Human rights protection is a priority,” said Tokayev. “A life-long moratorium on death penalties was introduced. In addition, the country will toughen the punishment for domestic violence. Judicial reform is based on the rule of law, independence, and fairness of judges. The state has to ensure justice and legal protection. People expect this from us. Therefore, we will continue to improve the mechanisms for protecting human rights.”

The state granted the Commissioner for Human Rights a constitutional guarantee and immunity. The law enforcement competence of the Prosecutor General has been strengthened.

“Elvira Azimova is an experienced specialist. She knows legislative work, and international law. She worked in the Ministry of Justice for more than 20 years. She started her career as a specialist and became a Vice Minister. Since 2019, she has been working as the Commissioner for Human Rights,” Tokayev said, introducing her to the post at the Senate meeting. 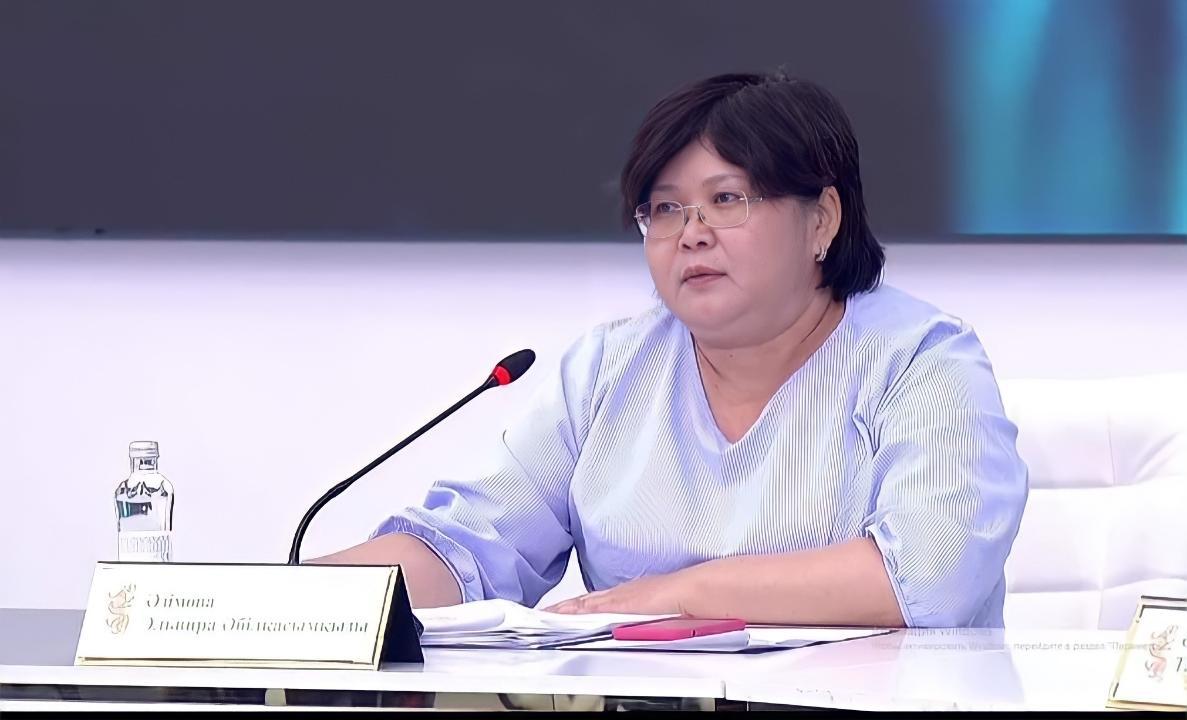 Elvira Azimova also held a number of meetings with representatives of the diplomatic corps accredited in Kazakhstan to establish cooperation in the field of human rights. Photo credit: Ortcom.kz

In 2019, Azimova became the Human Rights Commissioner of Kazakhstan.

The role of Azimova and her office was significant in connection to the proceedings related to the January events. She repeatedly insisted on protecting individuals under investigation and establishing legitimacy and justice during the investigation.

Azimova and civil society representatives, including the groups of the National Preventive Mechanism against torture, visited detention facilities in regions to prevent any human rights violations among detainees. She proposed to introduce a warning instead of a fine for socially vulnerable citizens, such as pensioners, unemployed, and people with disabilities. She also suggested considering mild forms of punishment for citizens involved in criminal prosecution concerning mass riots for first-time offenses. 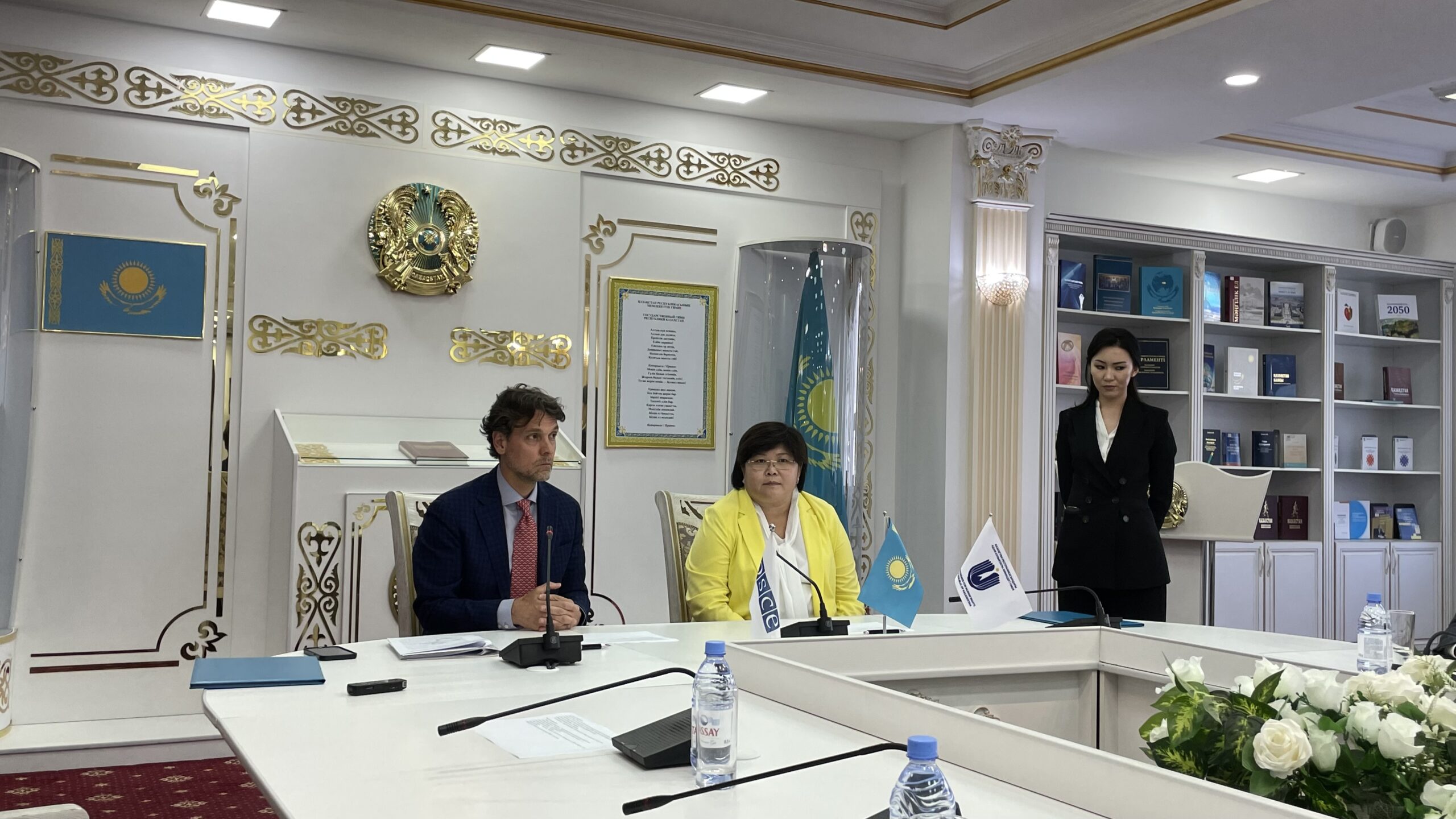 Director of the OSCE Office for Democratic Institutions and Human Rights Matteo Mecacci and Commissioner (Ombudsperson) for Human Rights Elvira Azimova during a meeting in Astana on June 23.

In September, Azimova discussed enhancing collaboration in democracy and human rights protection with the EU Special Representative for Central Asia Terhi Hakala, and the EU’s Special Representative for Human Rights, Eamon Gilmore during her working visit to Brussels. In addition, she presented the country’s priority initiatives to strengthen the fundamentals of the rule of law to Deputy Managing Director of the European External Action Service for the Eastern Partnership, Russia, the Caucasus, and Central Asia, Luc Devigne.

Azimova also met with experts from the International Partnership for Human Rights and the World Organization Against Torture to discuss international collaboration in preventing torture.

The visit made it possible “to update the current cooperation agenda with EU partners and discuss issues to strengthen practical mechanisms for the protection of human rights in Kazakhstan,” according to the Human Rights Commissioner’s Office.

Azimova and Director of the OSCE Office for Democratic Institutions and Human Rights Matteo Mecacci agreed to strengthen cooperation as part of the memorandum signed during Mecacci’s visit to Kazakhstan on June 23. The agreement seeks to increase support to Kazakh civil society and various institutions for the implementation of human rights and democratic principles within the OCSE. It also aims to promote the rights of minorities, youth, women, and people with disabilities.

Azimova also held a number of meetings with representatives of the diplomatic corps accredited in Kazakhstan to establish cooperation in the field of human rights.

Azimova supported the Ministry of Internal Affairs’ decision to develop the draft law on combating human trafficking in 2023 during a round table dedicated to the World Day Against Trafficking in Persons on June 26. Individuals involved in human trafficking will be punished, said Azimova.

This year, the Ombudsman for Human Rights representatives were appointed in 17 regions and in the cities of Astana and Shymkent. The offices in the Ulytau, Abai and Almaty regions will start operations in 2023. “The institution of the Commissioner for Human Rights has a great responsibility to provide feedback between the authorities and people. Our reliable partners are active citizens, professional legal consultants, mediators, lawyers, and non-governmental organizations NGOs,” said Azimova at the press briefing on Aug. 30.

It should be noted that the constitutional amendments adopted in 2022 also seek to strengthen human rights capacity.

This year, the Institute of the Ombudsman, government and NGOs succeeded in preventing ill-treatment and protecting the right to health in closed institutions. As a result, the prison medical service has become part of civilian healthcare in accordance with the Guidelines of the Office of the UN High Commissioner for Human Rights and WHO recommendations.

In 2021, Kazakhstan also lifted the ban on the employment of women in 229 professions in line with the recommendations of the UN Committee on the Elimination of Discrimination Against Women (CEDAW).

The legislative proposals concerning the social and economic rights of citizens, and the right to freedom of association have been developed, and are under consideration by the Parliament, reported the Human Rights Commissioner’s Office.

The main advantage of the court is that people, the Commissioner and the Prosecutor General in addition to the President, deputies, and the Prime Minister will be able to apply to the court. This will expand the categories of appeals that may require constitutional control over the compliance of laws and other normative legal acts with the norms of the Constitution.

A person must be a citizen of Kazakhstan to be eligible to become a judge. They should be at least 40 years old, have a higher legal education, have high qualifications in the field of law, have work experience in the legal profession of at least 15 years, and have an impeccable reputation. The same person may only be appointed as a judge of the constitutional court once for eight years.