NUR-SULTAN – Peace, order and rule of law in the country depend not only on the legislative and executive authorities but also on every citizen of Kazakhstan. What happened must become a lesson for all, said Elvira Azimova, Kazakhstan’s Human Rights Ombudsperson in Kazakhstan, at an online media briefing at the Central Communications Service. 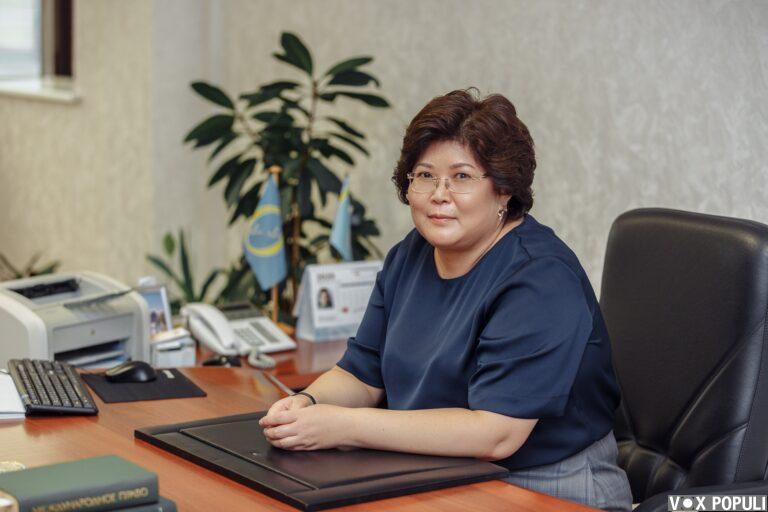 “Human life is of the highest value. This indisputable truth is the basis of the Constitution of Kazakhstan. The tragic events that occurred in early January in our country shook Kazakhstan and the world community. Not only military and police officers but also civilians became victims of terrorists. Our deepest condolences go out to the families and friends of the victims,” she said.

In his recent statement on Twitter, President Kassym-Jomart Tokayev wrote that “those who have committed serious crimes will be strictly punished in accordance with the law.”

According to Azimova, 91 people have been released and more than 70 administrative penalties have been commuted.

“We want this process to continue. There should be a clear separation between terrorists, between those who committed theft and looting, and those who participated in peaceful rallies. Unfortunately, when we visited detention facilities and talked with detainees, many said they were not fully aware of their civic responsibility and did not fully understand the consequences, but this, of course, does not exempt them from responsibility before the law and to society,” she said.

In a few days, Azimova and civil society representatives, including the groups of National Preventive Mechanism (against torture), visited 34 detention facilities in 11 regions.

“It is important for the prosecutor’s office to check all reports of brutality, give a legal assessment of them and make the results public. This work should not be conducted nominally. This approach is a guarantee of transparency and impartiality,” she added.

According to her, there have been complaints of restricted access, failure to notify relatives of detainees’ whereabouts, failure to provide medical care in the first hours of detention or unwarranted detention, as well as 21 appeals about ill-treatment. She stressed that such treatment is unacceptable.

“As a representative of the Prosecutor’s Office said at the briefing yesterday, given the results of the inspection, the Prosecutor’s Office of Almaty reduced the administrative penalties for 71 citizens, 91 citizens were released. This is very important because we need the citizens’ trust in justice and lawfulness. We have addressed the Ministry of Internal Affairs, the Ministry of Health, the Prosecutor General’s Office with a request for full coverage in the mass media of all the measures taken. As we have seen in recent days, this request has been addressed. It is very important to ensure the rights of all citizens for access to information as much as possible, it is also necessary to continue informing foreign diplomatic missions immediately about the detention or in case of detention of foreign nationals to verify the facts or signals of illegal actions,” said the Ombudsperson.

Visits to special institutions will continue, she said, noting the importance of ensuring independent monitoring of human rights and constitutional guarantees of access to protection, prevention of ill-treatment, and other guarantees of detention in closed institutions.

“Our mission is not just to collect appeals and complaints, but to constantly remind law enforcement agencies of public control, prevent further violations, and in case of receipt of appeals, immediately report them,” said a member of the Coordinating Council of the Human Rights Ombudsperson on the National Preventive Mechanism (NPM) Shakhnoza Khassanova.

She emphasized that obtaining professional legal assistance is a “constitutional right of citizens” as well as holding trials with the obligatory participation of lawyers, a periodic publication of up-to-date information for the population on detainees, released, convicted, administratively arrested, persons in medical institutions, deceased and unhindered visits by NPM participants to special facilities and premises of police and the National Security Committee bodies.

According to Zhemis Turmagambetova, head of the charter for Human Rights Public Foundation, a member of the National Council of Public Trust and the Coordinating Council of the Human Rights Ombudsperson on NPM, there is a need to set up as many hotlines for citizens on human rights issues as possible – on legal assistance and advice, on documenting, collecting and processing information (video and audio, evidence of monitors, journalists, and eyewitnesses), among other issues.

“All of the above needs to be done if one wants to consolidate public confidence in the institutions of state authority. Objective and impartial clarification of the causes of what happened, the establishment of all the circumstances, analysis of the actions of authorities, law enforcement agencies, protesters, observance of fundamental rights during the investigation and trials will ensure the prevention of such tragedies in the future,” said Turmagambetova.