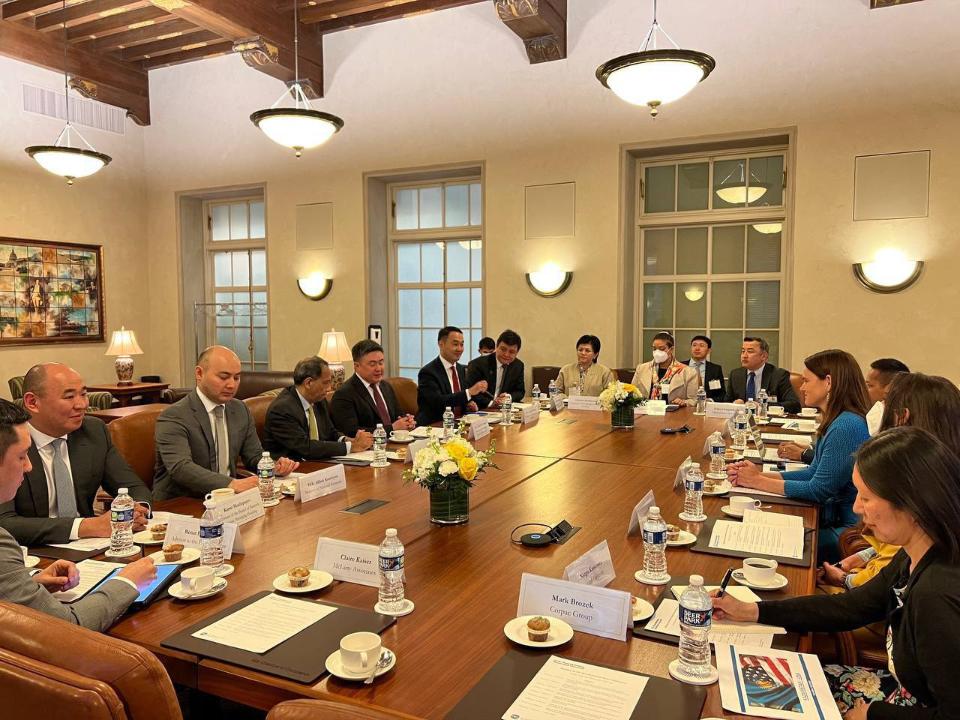 The Kazakh delegation during their meeting in Washington D.C. Photo credit: Kazakh Ministry of National Economy

During his meetings with representatives of international financial institutions, the United States government, and the U.S. business community, he focused on forging partnerships and strengthening the existing cooperation between Kazakhstan and the US.

During his meeting with World Bank Vice President for Europe and Central Asia Anna Bjerde, the sides discussed the 30-year strategic cooperation between Kazakhstan and the World Bank. This year, the World Bank and Kazakhstan will mark 30 years of partnership, one that has continuously aimed to help the country transform into a modern society, with the World Bank investing more than US$8 billion to support the country’s development across a wide range of areas from finance and social services to infrastructure.

Bjerde, who visited Kazakhstan in November, commended the country’s efforts toward social and economic reforms.

Kuantyrov and Bjerde also discussed Kazakhstan’s reform efforts with a focus on green transition, as the country strives towards a green economy by 2050 and achieving carbon neutrality by 2060.

Economic diversification, employment, the development of human capital, and the problems of social inequality, as well as sustainable economic development, were central to Kuantyrov’s discussions with other World Bank senior officials.

As part of their working trip last week, the Kazakh delegation briefed the U.S. business community, and the U.S. trade and investment structures on the new economic policy and the priorities of the country’s macroeconomic course that, among other goals, focuses on the formation of a new investment policy.

“The US has invested more than $60 billion since 1991. More than 500 companies with American capital are operating in our country, including those in oil and gas, chemical, construction, mining and smelting, engineering, and other industries. In 2021, the trade turnover grew by almost 29 percent to $2.2 billion,” Kuantyrov told the round table at the U.S. Chamber of Commerce.

The US is a key trade partner of Kazakhstan and one of the three largest investors in the country. Both sides affirmed their interest in strengthening these ties, including increasing Kazakhstan’s exports to the US for more than 75 types of goods from the metallurgical, chemical, engineering, and food industries.

While in Washington, Kuantyrov also met with the top management of three international rating agencies – Moody’s, Standard & Poor’s, and Fitch Ratings. He discussed the prospects and challenges for the region’s economic development and the country against the backdrop of Western sanctions against Russia.

In February and April, Fitch Ratings and S&P affirmed Kazakhstan’s sovereign credit rating at a stable outlook and commended the country’s measures in response to internal and external challenges.