By Assem Assaniyaz in Business on 2 April 2022 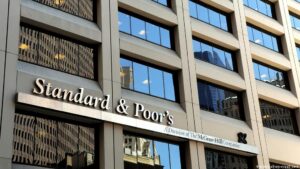 The Central Asian nation’s rating is conditioned by the strong government and external balance sheets, along with elevated oil and gold prices to help mitigate external shocks to the country’s economy, according to S&P research.

After joint discussions with the Kazakh Government, the Agency determined that the consequences of economic sanctions against Russia are surmountable for Kazakhstan’s economy, Prime Minister Alikhan Smailov’s press service reported.

It was found that the reduction in capacity at the loading terminal of the Caspian Pipeline Consortium (CPC) is temporary and is not expected to lead to significant interruptions in Kazakhstan’s export oil supplies.

However, S&P analysts expect the real GDP growth of 2 percent in Kazakhstan this year down from the previous expectation of 3.6 percent, as exports decline and economic activity slows, weighed down by the estimated 6.2 percent contraction in Russia, one of Kazakhstan’s key non-oil trading partners.

The government’s fiscal position will be somewhat more constrained in 2022. Kazakhstan is facing risks of increased dollarization of the economy due to the instability in the tenge (KZT) market.

The National Bank of Kazakhstan (NBK) moved quickly to maintain stability of the KZT by increasing its base rate by 325 basis points (bps), to 13.5 percent on Feb. 24. The Kazakh government and the NBK announced a tenge deposit protection scheme to maintain the attractiveness of tenge deposits, which should help to keep dollar deposit rates stable.

The next scheduled publication on the sovereign ratings on Kazakhstan will be on Sept. 2, 2022.