ASTANA – If you have ever listened to traditional Kazakh songs, chances are you have heard the dombra with its intricate, but delicate tonality that produces magical sounds from the endless Kazakh steppe. Sometimes it soothes by its fragile tunes, sometimes it excites by resembling a herd of wild horses galloping across the wide prairie. 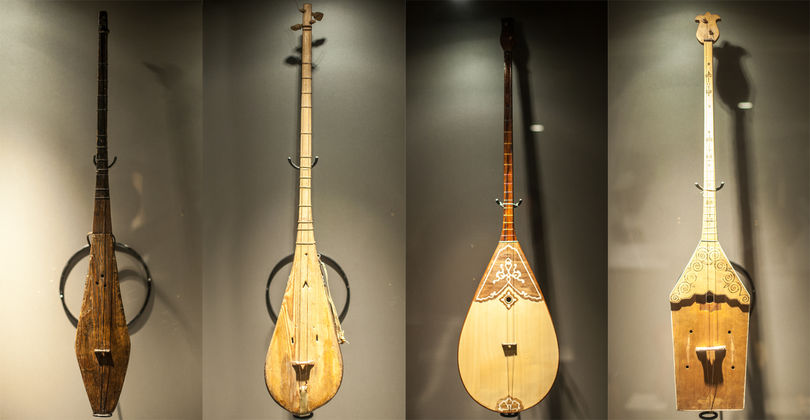 Dombras from different time periods and regions are represented in the museum of folk musical instruments named after Ykhlas in Almaty. The museum collection has authentic instruments belonging to prominent Kazakh kuishi-composers of the 19th-20th centuries. Photo credit: abai.kz

The dombra is a long-necked, half-pear-shaped lute with two strings, the body of which is carved out of a single block or composed of rasped parts of a maple tree, elm, or birch.

The dombra has long been a key element of Kazakh orchestras and is often played during family gatherings and on national and public occasions. It sounds wonderful when played solo and as an accompaniment to a song.

Every year since 2018, on the first Sunday of July, Kazakhstan celebrates National Dombra Day, instituted by First President Nursultan Nazarbayev. This year President Kassym-Jomart Tokayev in his congratulatory speech said that the dombra is the “talisman and amulet” of the Kazakh nation.

“Its melodies are close and familiar to each of us because Kazakhs and dombra are inseparable from each other…Our people and the dombra are connected for eternity, as the spirit of freedom is transmitted from generation to generation through the art of the kui (traditional Kazakh composition),” he said.

The Dombra as part of Kazakh national identity

For hundreds of years, the dombra has been dear to the Kazakh people. Today, it is still embedded into the notion of Kazakh national identity. 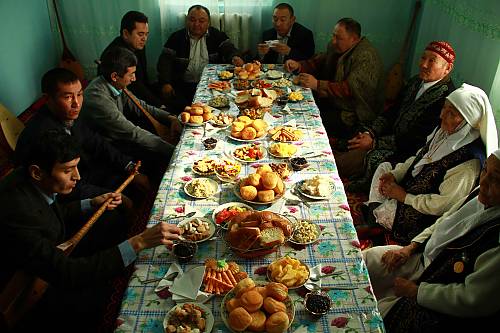 The dombra is often played during family gatherings on national holidays and on special occasions, like weddings. Photo credit: ich.unesco.org

Perhaps nothing is more famous than a saying by Kazakh poet and writer Kadyr Myrza Ali “A real Kazakh is not a Kazakh, a real Kazakh is a dombra,” which every dombra player has heard at least once in his life.

For Raziya Mubarak, an amateur dombra player with seven years of professional training, the phrase has a profound meaning. “No one knows that a person in front of you is Kazakh unless one starts playing its own national instrument, like dombra or qobyz. The dombra will show another person that you are a Kazakh,” she said in an interview for this story.

Sharing her lifetime relationship with one of the country’s oldest musical instruments – the dombra, Mubarak said she started learning to play the instrument at the age of six when she went to school.

“My parents inspired me to pick up this instrument,” said Mubarak. “I think they wanted to give me some kind of Kazakh mentality and introduce me to Kazakh culture and traditions through the instrument.”

Mubarak has struggled through many hours of practice on her learning journey before mastering the dombra. “It was a test of patience and perseverance. There were times when I hated the learning process, but after all this time, I think that it was actually a good idea to teach a national instrument to children. While being abroad I felt that I could show Kazakh culture, history, and identity through dombra. A Kazakh could travel to any part of the world and showcase part of Kazakh culture,” said Mubarak. 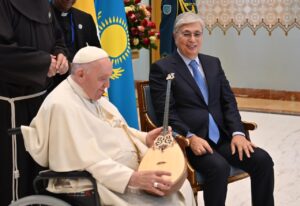 In memory of his visit to Kazakhstan, President Tokayev presented Pope Francis with a dombra. Photo credit: Akorda

The dombra has been the very backbone of Kazakh identity for so long that even Pope Francis, the leader of the Catholic Church, highlighted its importance in his opening speech at the seventh Congress of the Leaders of World and Traditional Religions in September. “The dombra is a hallmark of your culture and one of the most important symbols of Kazakhstan,” he said.

According to him, the two parallel strings of the instrument symbolize Kazakhstan’s capacity to create harmony and balance between “frigid winter and torrid summer,” tradition and progress, Asia and Europe, it is a symbol of being “a junction between East and West.”

Bidding farewell to the Pope, President Tokayev gifted him a dombra in gratitude for the Pope’s warm references to the Kazakh national instrument.

Already in his seventies, Zholaushi Turdugulov has been making the dombra for over 50 years now. The craftsmanship is an extension of his love for traditional instruments and music that has been spiritually enriching his soul since his twenties.

In his approach to making an instrument, Turdugulov seems to emphasize the primordial quality of a sound. “Sound is the most important thing,” he says. “The technical side of making a dombra is not that difficult. But finding the right tone of the instrument, the timbre of dombra, whether it has the traditional Kazakh tone and sound, recognizing the right wood is a skill that requires years of practice.” 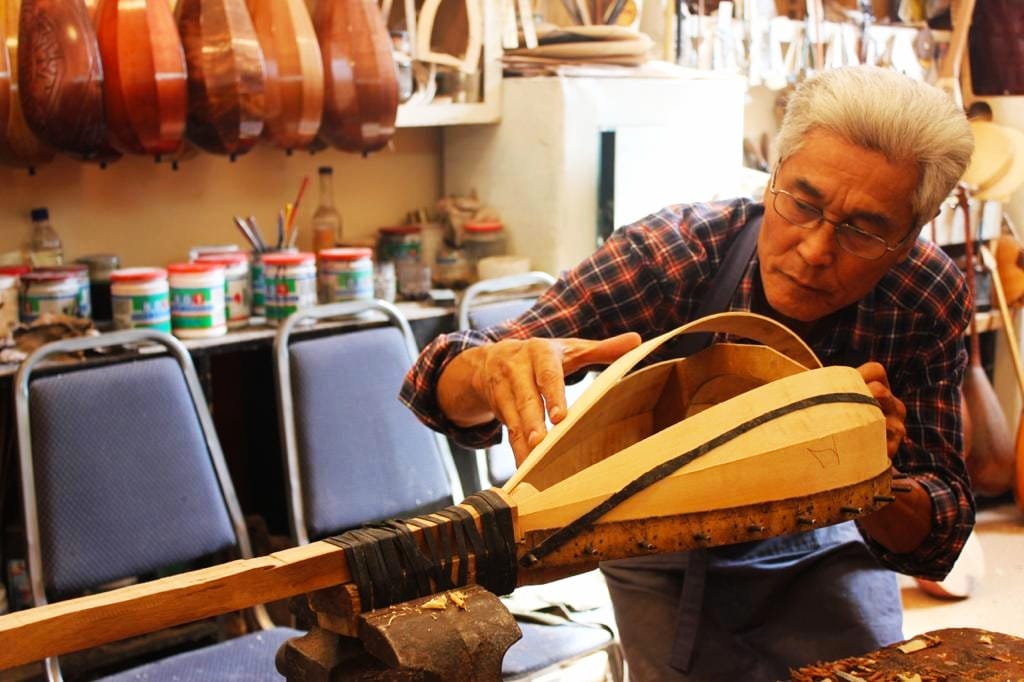 A trained ear could easily distinguish a good quality dombra from an ordinary one just by listening to the sound. For that, choosing a material with high acoustic quality is important.

Turdugulov knows how to skillfully bring the best sound out of dombras. For many years now, he has offered tuition to those who want to learn the art of making a sound dombra, something he sees as a good deed, as a means of protecting this ­invaluable piece of Kazakh musical heritage. “Dombra is one tool that reflects our national image, just as language and culture do,” he said.

Today, he works in his workshop in Almaty making dombras that once sparked his interest in craftsmanship, and in addition to dombra, he makes many other national instruments, such as the qobyz and zhetigen.

History of the dombra

Based on ancient drawings on balbal stones, the dombra is believed to date back to 4,000 B.C. A well-known Kazakh archeologist Kemel Akyshev working near Maitobe meadow in the Almaty Region in 1986 uncovered several stones that contain images of ancient people living in the area. 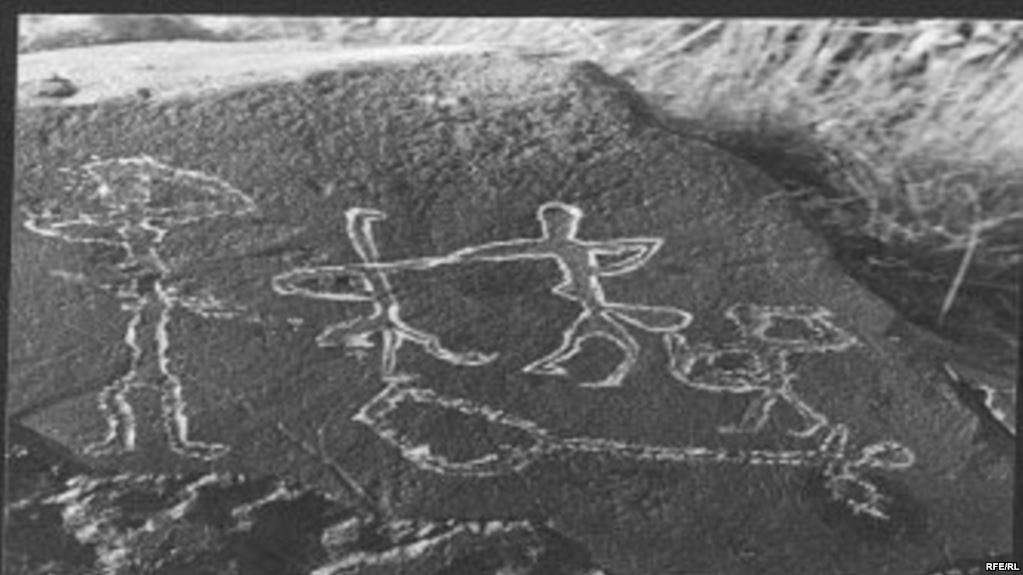 Depicted on the stones is a picture of an instrument placed in front of five dancing people. The instrument has two ears, that is, two strings, a long neck, and a forefront similar to that of a dombra. The dombra might be one of the oldest known string instruments in Central Asia.

It is widely believed that the golden era of Kazakh traditional music was the 19th century, with prominent Kazakh kui composers whose major accompanying instrument was the dombra. Among them was Kurmangazy, one of the great dombra virtuoso players who had a major influence on the development of Kazakh music culture.

Kurmangazy’s dombra and composing skills set him apart from others. Being the author of more than 60 kuis, he used the dombra very powerfully in his masterpiece kuis “Saryarka ” and “Adai,” which have become classic staples that every dombra player is honored to perform.

Kurmangazy’s distinctive compositions reinvigorate rich and varied sounds coming out of a dombra. In his kuis, one can hear the endless Kazakh steppe. The resulting sound is like the rustle of grass, the neighing of a horse, or a free wind.

Stretching into modernity, the dombra is still seen as the queen of Kazakh instruments. It is the most popular choice for Kazakh composers, traditional singers, and aitys (improvisation art) performers.

Dimash Kudaibergen, a famous Kazakh singer and “a man of six octaves,” was able to bring the sound of the dombra to a wider audience. He often performs Kazakh national songs and kuis on dombra. In 2019, at his big solo concert in New York Dimash played the “Adai” kui by Kurmangazy in front of 9,000 people.

The Kazakh dombra has been part of the national list for the intangible cultural heritage of UNESCO (United Nations Educational, Scientific and Cultural Organization) since 2014.