By Aibarshyn Akhmetkali in Congress of Leaders of World and Traditional Religions, International on 16 September 2022

NUR-SULTAN – Over the past two days the Kazakh capital Nur-Sultan once again served as the platform for dozens of religious leaders to engage in dialogue and seek ways to promote peace and tolerance amid rising tensions in the world.

The Congress of the Leaders of World and Traditional Religions, which the country has hosted since 2003, featured vibrant discussions between leaders of world religions, including Pope Francis, and concluded with the signing of the declaration on Sept. 15. 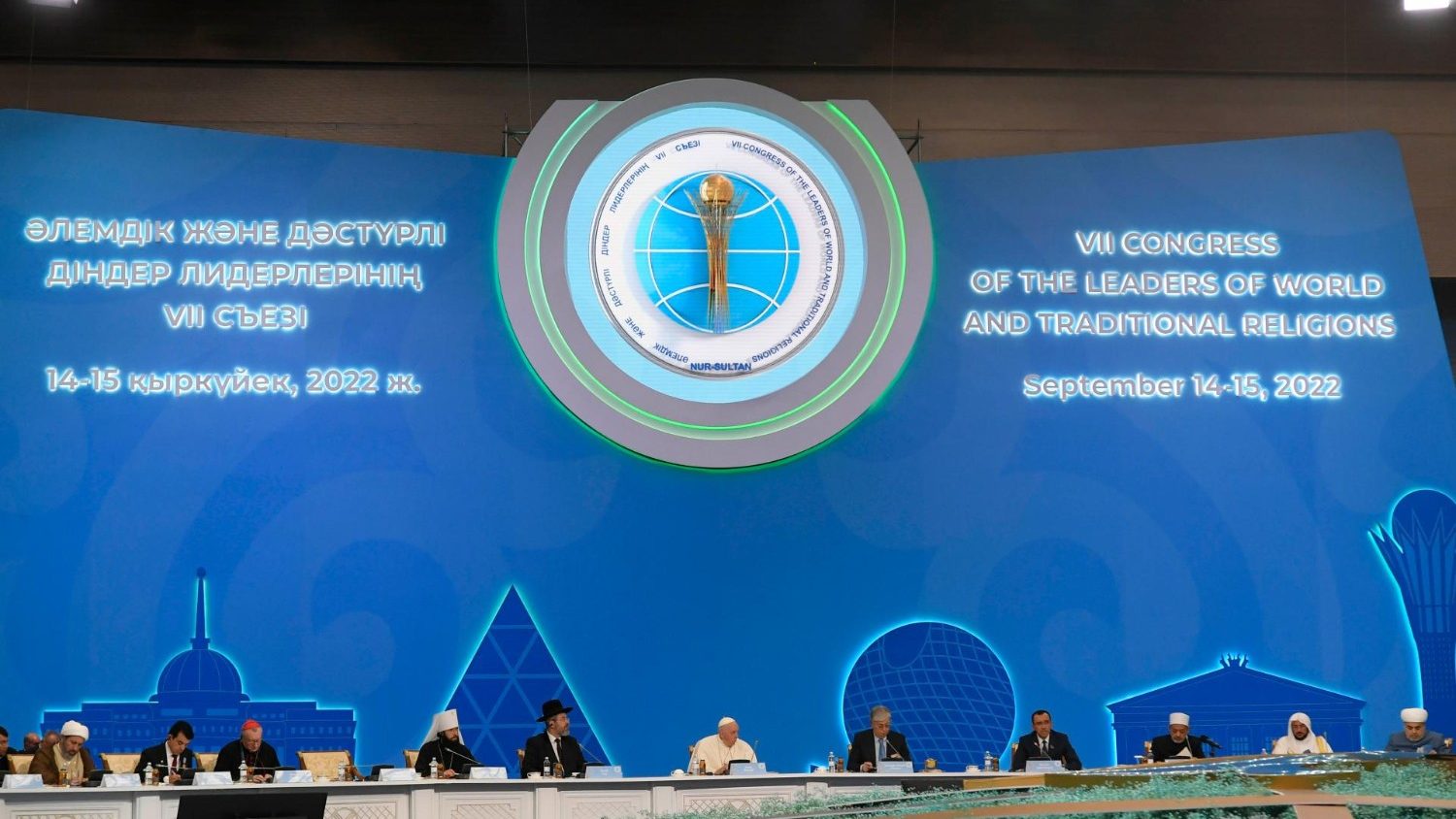 Closing ceremony of the seventh Congress of the Leaders of World and Traditional Religions. Photo credit: press center of the congress

Declaration – a Document of Fraternity and Tolerance

The declaration, the main document of the congress, contained principles of religious pluralism and tolerance based on the equality of all people in the face of God.

“Peace is born of fraternity,” said Pope Francis in his concluding speech. “It grows through the struggle against injustice and inequality; it is built by holding out a hand to others. We, who believe in the Creator of all, must be on the front lines in promoting the growth of peaceful coexistence… The declaration thus exhorts world leaders to put an end to conflicts and bloodshed everywhere, and to abandon aggressive and destructive rhetoric.”

The declaration, which will subsequently be distributed as an official document of the 77th session of the United Nations General Assembly, reflects religious leaders’ efforts toward promoting interreligious dialogue and fostering inter-civilization cooperation. 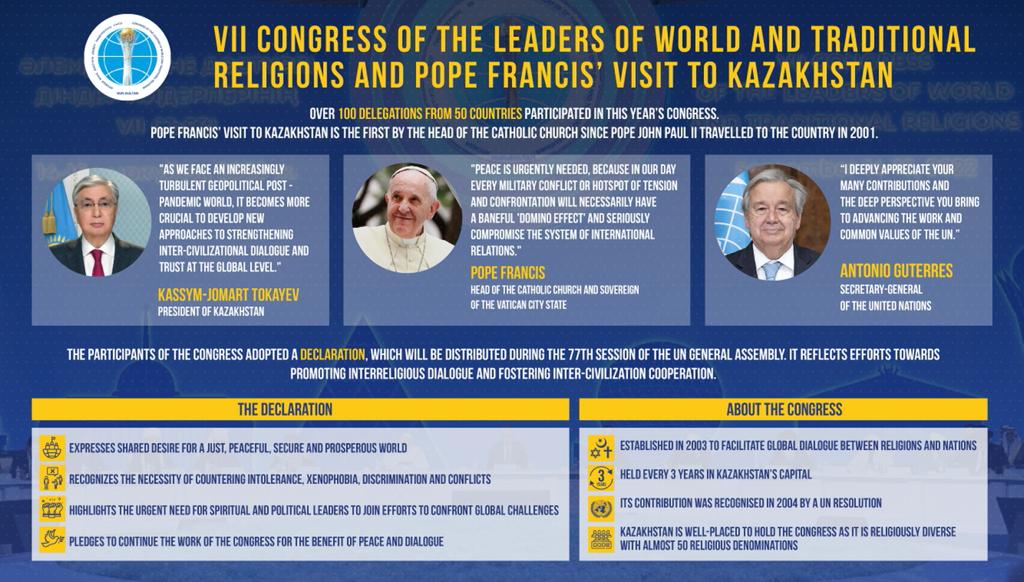 Jo Bailey Wells, the special representative of the Anglican Church and Bishop of Dorking, said the implementation of principles is the next most important step. “It is vital not just that we talk, but that we act, and I hope that from this congress on we will continue to build friendships of trust,” she said.

Speaking at the closing session, Sheikh Ahmed al-Tayeb, Grand Imam of al-Azhar, said he cannot conclude without repeating that “the message of religions will not reach its goal unless it unites, unless its people are united, and unless it becomes a force acting above all to purge religious feelings of hatred and malice.”

He said that religions should cultivate human kindness instead of directing this force towards stirring conflicts between religions and religious people.

The congress was imbued with symbolism as David Baruch Lau, Ashkenazi Chief Rabbi of Israel, associated Kazakhstan with an eagle “that soars to the sky and brings everyone together under the enigmatic wings of peace and brotherhood.”

Pope’s visit has made a truly historic contribution to the congress. His presence in Kazakhstan, a Muslim majority country, signified the message that humane values go beyond the differences in religion, race, gender, and language. 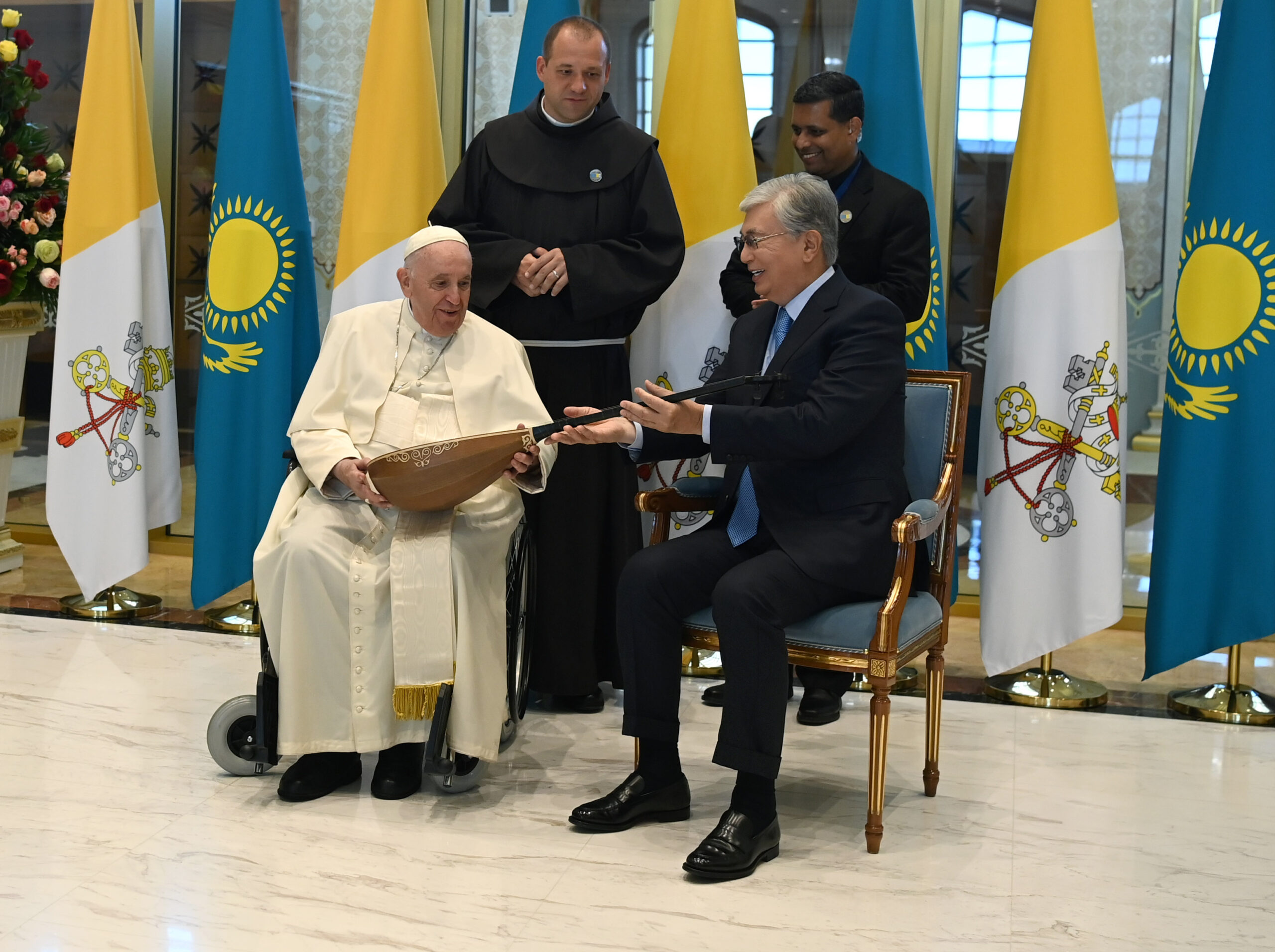 At the airport, President Tokayev gifted the national musical instrument dombra to the Pope in gratitude for the Pope’s warm references to the Kazakh culture and particularly the dombra.

“The Kazakh people are especially grateful to you for the fact that you spoke very warmly about our culture, especially about dombra… After your words, I think the interest in dombra will be shown not only in Kazakhstan but also abroad,” said the President.

On the last day of his visit, the Pope had a chance to meet with the local clergy and the faithful, reported the Vatican press office.

The Catholic community in Kazakhstan is small in numbers, but as the Pope puts it in words “the ‘littleness’ is magnified when it is shared.”

“In the Church, no one is a stranger! We are the one holy People of God, enriched by a multitude of peoples! The strength of this priestly and holy people lies precisely in its ability to draw richness from this diversity, by sharing with one another who we are and what we have,” he said while addressing the church ministers.

Another major highlight of the congress was a panel on the role of religious communities in supporting women’s social status hosted for the first time in the history of the congress.

The congress panel gathered people who shared their views on the ways religious institutions could strengthen the institution of the family and protect the rights and dignity of women. The panel gave an opportunity to voice the challenges women are facing. 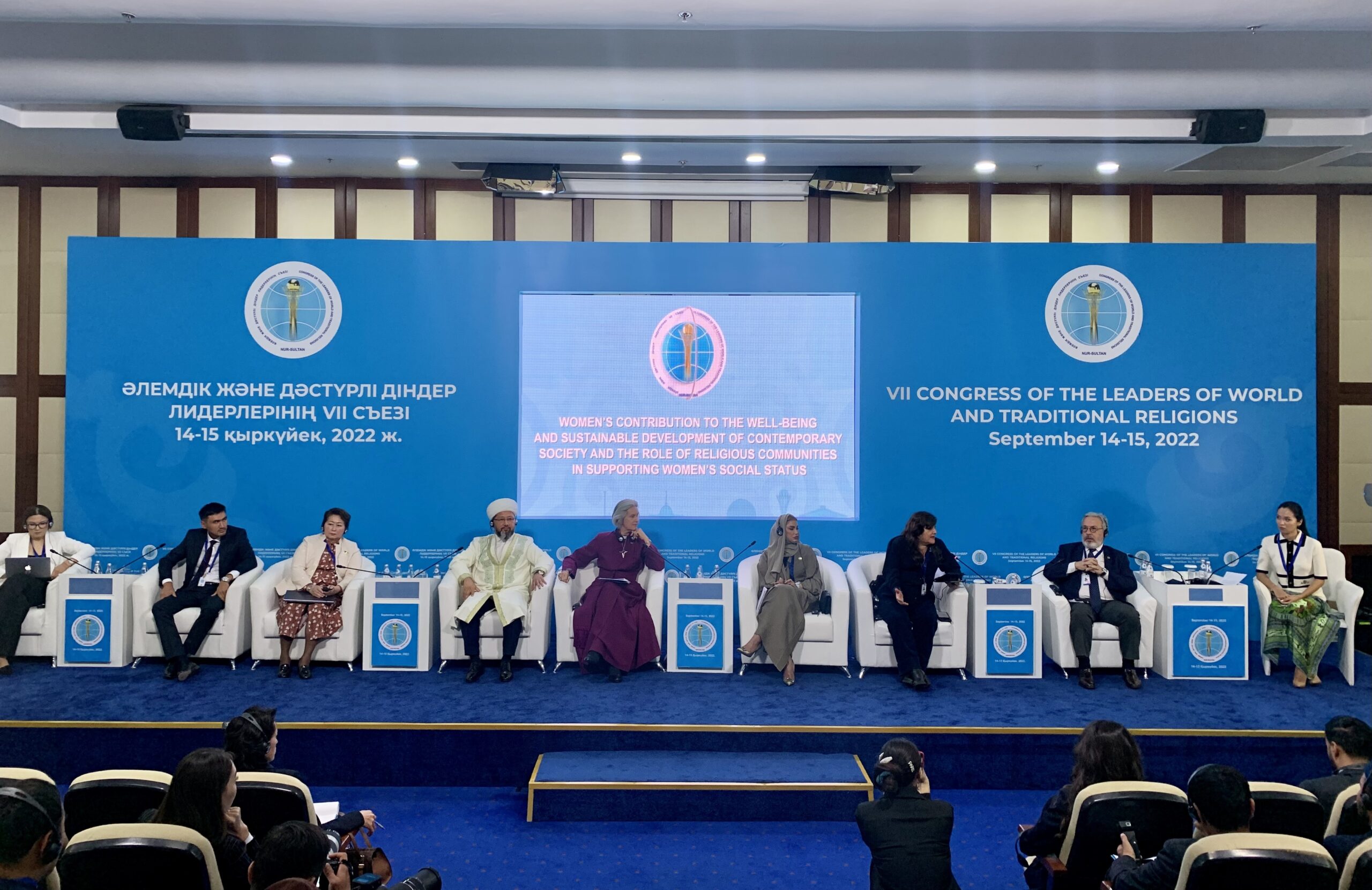 Isis Maria Borges de Recende, President of União Planetária (Brazilian Civil Society Organization), raised the question of unity between men and women from a religious point of view. “As spirits, we have no gender, but as personalities we do. This lack of unity between our divine being and our personality is the main cause of suffering. Religion has an important role to reestablish this union that sometimes is lost,” she said.

The contribution to the sustainable development of society, which was previously an exclusively male endeavor, is changing rapidly towards greater women’s involvement.

According to her, to build a better world, “we have to affirm our position as human beings with both masculine and feminine characteristics of love, sensibility, compassion, courage, and taking care of human homes for all of us.”

Zhuldyzai Iskakova, Young Experts Club member under the Senate (the upper house of Parliament), said “women are more and more often perceived not solely as the keeper of the hearth, mother, wife, or grandmother.”

“Kazakh girls and women are increasingly manifesting themselves in science, education, business, and public life,” she said.

This shift should be facilitated by religious organizations, said Iskakova. “It is very important that members of the clergy help society to get rid of such negative social phenomena as violence against women and children and in Kazakhstan, such positive practice is already being implemented,” she added.

She brought up the various projects of the Spiritual Administration of the Muslims of Central Asia and Kazakhstan as an example that promotes a culture of nonviolence, provides education on reproductive rights and family planning, and addresses responsible fatherhood and the role of men in supporting women and children.