By Saniya Bulatkulova in Culture on 21 November 2021

NUR-SULTAN – Young Kazakh musicians Nurali and Galamat Beisekozha were recognized with the Outstanding Composers award in Germany, where they performed with their solo concert upon the invitation of the Art, Media and Science Foundation of Karlsruher Technology Institute on Nov. 10, reported Khabar TV. 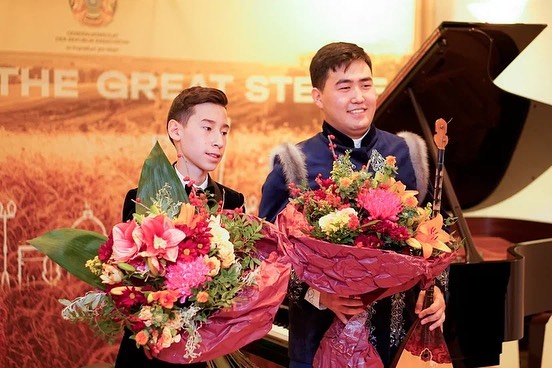 The foundation awarded the artists after they presented their own compositions. The musicians performed both solo and as a duet, combining two styles – classical and folk music.

15-year-old Nurali played the piano, while his 20-year-old brother Galamat played the dombra, a Kazakh folk instrument. It was the first concert abroad for the brothers.

“I remember only two cases when someone was recognized with such awards. And for the second time it was Nurali and Galamat Beisekozha who received it for their achievements despite their young age. Nurali has authored 250 compositions and Galamat is the best dombra player I have ever known,” said the foundation’s chair Saule Tatubayeva.

Galamat has composed approximately 100 kuis (traditional musical composition): they include both poems for orchestra and songs. He composed his first kui “Zhenys” (Victory) at the age of 11.

Nurali, who started to play the piano when he was only a four-year-old child, has composed more than 250 works. He received a diploma, which confirmed he was the youngest composer in the country, by Kazakh Composers’ Union Chair Balnur Kydyrbek when he was nine.

The Beisekozha brothers, who both study at Akhmet Zhubanov Republican Specialized Music School for Gifted Children, rose to fame when they took part in the Central Asia’s Got Talent international show along with participants from Kyrgyzstan, Uzbekistan and Tajikistan.

Artists dream of performing on the most prestigious venues in Europe to make the music of the Great Steppe recognizable throughout the world.