Nursultan Nazarbayev: Looking Back At a Legacy of Friendship and Cooperation With Tatarstan

We took a similar life path, both myself and the First President of Kazakhstan Nursultan Nazarbayev. We are the children of our time and of the USSR, where we both found ourselves at the centre of the fateful historical events surrounding the Perestroika years (Restructuring of the Soviet system). Our meeting, apparently, was inevitable, because Tatarstan and Kazakhstan always had not only friendly, but also fraternal relations. 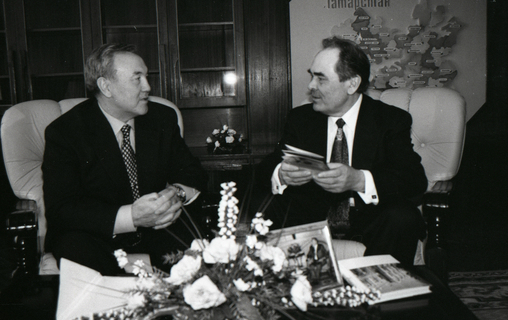 From the middle of the 18th century onwards, Tatars began mass-migrating into Kazakh lands, first to Uralsk, Semei, Petropavlovsk, and their descendants throughout the 19th century moved further into the Kazakh steppe through to Kokshetau, Akmola, Pavlodar, Atbasar and Verniy (now Almaty). This was a time of education – with many Tatars coming to work as teachers in Kazakh schools and enlighten the Kazakh people. The territory of today’s Kazakhstan was actively developed by the Tatar capital. After the Revolution, Tatars took part in the state and cultural construction of the young Kazakh republic. For example, it was Tatars who introduced Kazakhstan to the art of theatre.

After World War II, Tatars came to work in the mines of Karagandy and Oskemen, and later they developed the virgin lands.

“The first visit I made was to Kazakhstan” 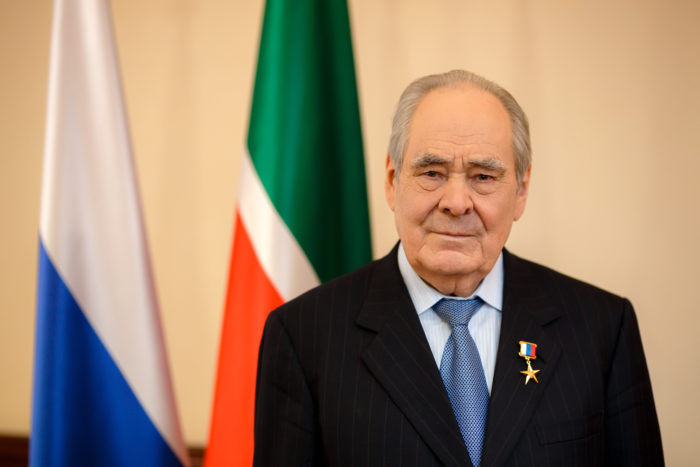 The interest of Tatars in Kazakhstan is explained by the benevolent attitude of the local population, a common faith, the proximity of languages, social and national aspirations. And, of course, the breadth of the soul of the Turkic peoples, which even today attracts Tatars to Kazakhstan, and Kazakhs to Tatarstan. Today quite substantial diasporas reside in both republics supported by the leadership of Tatarstan and Kazakhstan. For example, the bust of our great poet Gabdulla Tukai was installed in the park of the same name in the city of Uralsk, where he lived and worked, and the national museum of the poet was established.

I must emphasize that after Kazakhstan gained independence, there was not even a hint of any changes in our relations. Nursultan Nazarbayev and I were honoured to strengthen long-standing friendly relations at a new historical stage, to continue developing multilateral cooperation between our republics. In the most difficult political times for Tatarstan, Nazarbayev showed understanding and provided us with credible support. In 1992, my first visit as the president of Tatarstan (establishment of which in 1991 was perceived ambiguously in the political space of Russia) I made to Kazakhstan, where I was received by the head of the state with honors corresponding to the highest rank accorded to guests.

I remember well a trip to Kazakhstan in 1995 to celebrate the 150th anniversary of the renowned poet of the East, the famous poet and philosopher Abai Kunanbayev. In 1998, we attended an international presentation of the new capital of Kazakhstan – Astana (Nur-Sultan). I believe that the transfer of the capital of the sovereign Kazakhstan to Astana was Nursultan Nazarbayev’s far-reaching strategic vision. There were many arguments in favour of this most important decision for the country, but the main one, from my point of view, is the right of the new state to start its history from scratch, with a new capital. It is also important that the transfer of the capital to a city located in the center of the republic made Kazakhstan’s territorial integrity stable and undeniable.

The city represents the country with a dignity that symbolizes the new life of Kazakhstan, which has achieved the greatest success in comparison with most post-Soviet states. A new country has appeared on the world map, gaining strength and authority.

“Reached great heights without breaking away from the roots”

We highly appreciate Kazakhstan’s contribution to the preservation and enrichment of our common Turkic culture and the development of the Turkic world. In 2004, Nursultan Nazarbayev spoke at the International Scientific Conference Ideas of Eurasianism in the Scientific Heritage of Lev Gumilyov in Kazan, dedicated to the memory of the prominent scientist and Turkologist. The President said that he had decided to dedicate the new Eurasian University in the Kazakh capital in the name of Lev Gumilyov, the founder of Eurasianism, who, “while being a Russian, devoted all his life and all his work to the history of Turkic peoples and cultures.” Today, this university is the only university in the world that bears the name of Gumilyov.

We, in 2005, on the 1,000th anniversary of our capital, erected in the center of the city a monument to Lev Gumilyov with his words: “I, the Russian man, have been protecting Tatars from slander all my life.” Kazakhstan to this day is actively promoting the ideas of Eurasianism. And it is no accident that the Agreement on the Establishment of the Eurasian Economic Community was signed in the Kazakh capital.

As a person who had the opportunity to observe from close range the development of the young state and the political formation of its undisputed leader, I will say that Nursultan Nazarbayev is a man with a lifetime of experience. Knowledge of life, knowledge of people is an invaluable quality for a leader of any level. Nazarbayev has gone on a journey from a simple village boy to the president of the country due to his natural talent, intelligence and efforts. He has reached great heights, not breaking away from his roots. Boldly answering modern challenges, changing the world around himself for the better, he remains unchanged in the most important parts of his character – his devotion to his people. That is why he is for us, first of all, a worthy son of the Kazakh people, who in many respects follows everyday folk wisdom. I think that is why Nazarbayev chose the only right path for Kazakhstan – fraternal relations with its closest neighbour Russian. Both countries are committed to this friendship.

I reacted to Nursultan Nazarbayev’s decision to leave his presidential post with admiration. This is an act of a strong person who in a short period of time created a state recognized by the whole world. He is a happy and radiant man. We see that the vector of the country’s development set by him is preserved in the actions of his ally and successor, the new president of Kazakhstan. We are pleased that Kazakh President Kasym-Zhomart Tokayev and the President of our republic Rustam Minnikhanov are able to find common ground and that our republics are developing a successful partnership in the framework of cooperation between Russia and Kazakhstan.

I am grateful to fate for being able to work and communicate with Nursultan Nazarbayev for many years. We have brotherly, cordial relations. We met relatively recently, in the summer of 2018. We talked, as they say, from the bottom of our hearts, not only about the days of the past, but also about what excites us today, including the preservation of our cultural heritage, which is an effort I am currently engaged in.

On behalf of myself and on behalf of all Tatarstani citizens, I wholeheartedly congratulate Nursultan Nazarbayev on his 80th birthday and wish him good health and prosperity. I can tell from my own experience, it’s wonderful when you are present at your own 80th birthday.

I wish you good health and great success, dear Nursultan!

With deep respect, from all my heart.)