One Year On from the January Tragedy in Kazakhstan

ASTANA – The Kazakh Prosecutor General’s Office and the Kazakh Ministry of Internal Affairs delivered their reports on Jan. 5 on the investigation into the tragic January events that shocked the nation exactly one year ago. 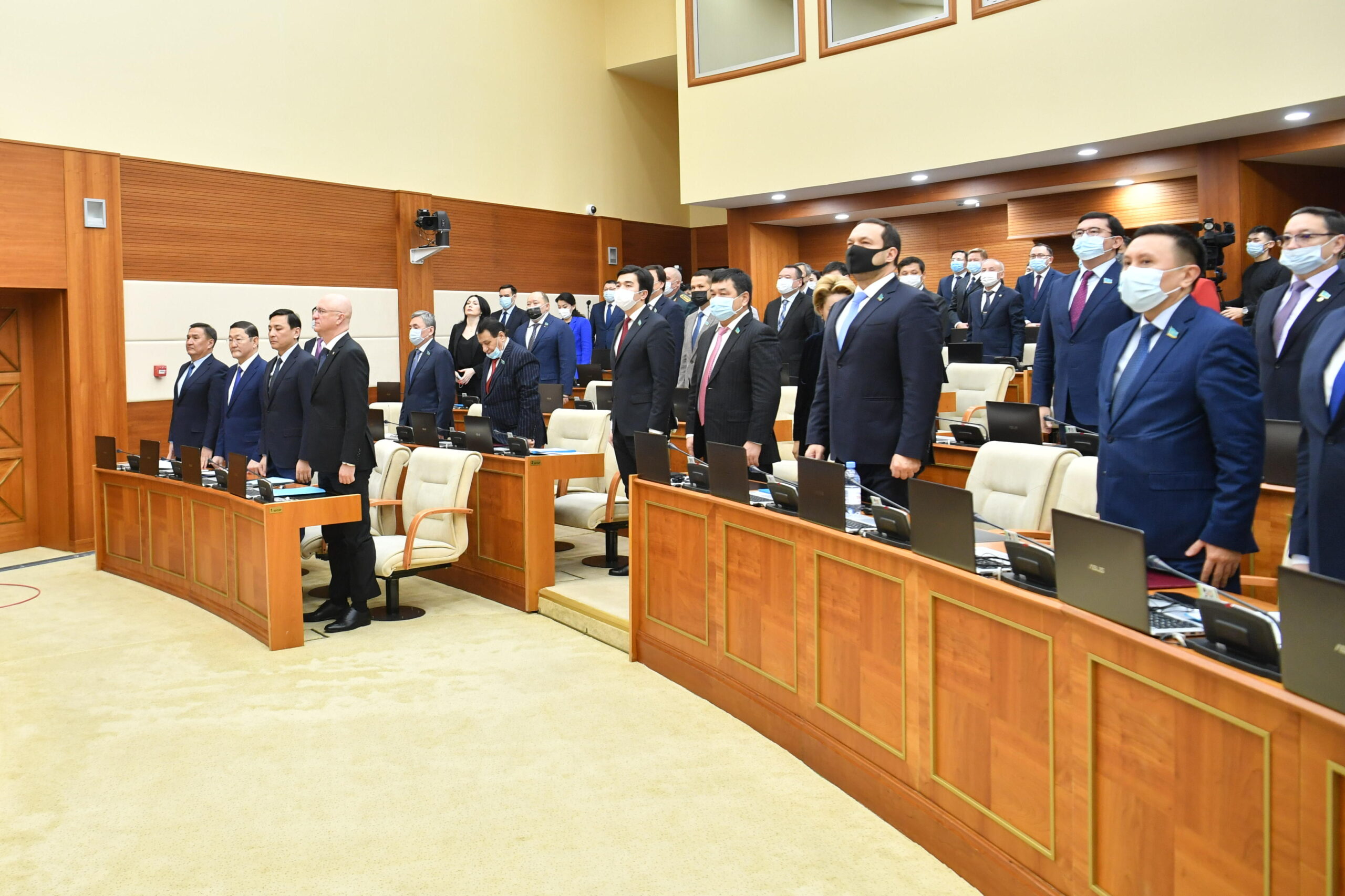 The hearing in the Mazhilis began with a minute of silence. Photo credit: parlam.kz

One year into the worst unrest the country has seen over the years of independence that left at least 238 people dead, including 19 law enforcement officers,  opinions still diverge on the real picture of what was happening on those first days of January 2022. On Jan. 5, Kazakh Prosecutor General Berik Asylov and Minister of Internal Affairs Marat Akhmetzhanov spoke about their chronology of events and the latest details.

The January events, also known as Qandy Qantar (bloody January), began on Jan. 2 in the small town of Zhanaozen in the oil-rich Mangystau Region in western Kazakhstan. People took to the streets over a sharp increase in the price of liquefied gas from 60 tenge (US$0.13) to 120 tenge (US$0.26) a liter, which the government had to address later.

But protests spread to other cities, including the nation’s largest city and former capital Almaty. According to Asylov, peaceful protests were “taken over by organized criminal groups” in what the country’s leadership named an “attempted coup d’etat.” He said that most of the participants were under 30 years of age. On the night of Jan. 5 to Jan. 6, the Almaty airport was seized, and dozens of administrative buildings were damaged or burned.

“Now we can say that under controlled chaos, the operation to remove the country’s top leadership was carefully planned,” said Asylov on Jan. 5, reporting to deputies of the Mazhilis, a lower chamber of the Kazakh Parliament. “In fact, it was a coup attempt.”

Delivering his report, Kazakh Minister of Internal Affairs Marat Akhmetzhanov said that on the night of Jan. 5, rallies were organized in several regions, with highways and railways being closed and railway stations and airports blocked.

“At the same time, in the cities of Taraz, Aktobe, Atyrau, Shymkent, and Uralsk, the buildings of the akimats [city hall] were attacked as a symbol of state power. Violence was used against workers everywhere, resulting in many serious injuries. Buildings, official cars, and video surveillance cameras were damaged. In short, this is not a peaceful rally at all,” said the minister.

The same day, Kazakh President Kassym-Jomart Tokayev declared a state of emergency that lasted through Jan. 19, with a curfew, temporary restrictions on movement, and a ban on mass gatherings. A critical red level of terrorist danger and an anti-terrorist operation was also put into place throughout Kazakhstan.

On Jan. 6, Tokayev appealed to the Collective Security Treaty Organization (CSTO), an alliance of Armenia, Belarus, Kazakhstan, Kyrgyzstan, Russia, and Tajikistan, to send peacekeeping troops to help guard strategic objects. This was the first time the CSTO exercised its peacekeeping provision envisioned in the collective security treaty as of May 15, 1992, and the agreement on peacekeeping activities of Oct. 6, 2007.

Peacekeeping contingents from Armenia, Belarus, Kyrgyzstan, Russia, and Tajikistan were deployed first in the capital city and relocated to guard Almaty until the last contingent departed from the country on Jan. 19. The mission numbered more than 2,000 officers and 250 units of military equipment.

Commenting on the use of lethal force against protesters, Asylov said that the fire was opened before the president’s statement.

“In fact, law enforcement officers do not need a special command to shoot at criminals. There are explicit norms in the laws on law enforcement, the National Guard, and counter-terrorism, which allow the fire to repel an attack when there is a threat to life and health. This is exactly the situation that occurred on Jan. 5,” said Asylov.

According to the report presented by Asylov, the riots were “orchestrated by organized criminal groups.” However, he provided few new details besides what was already known before yesterday’s Mazhilis hearing. 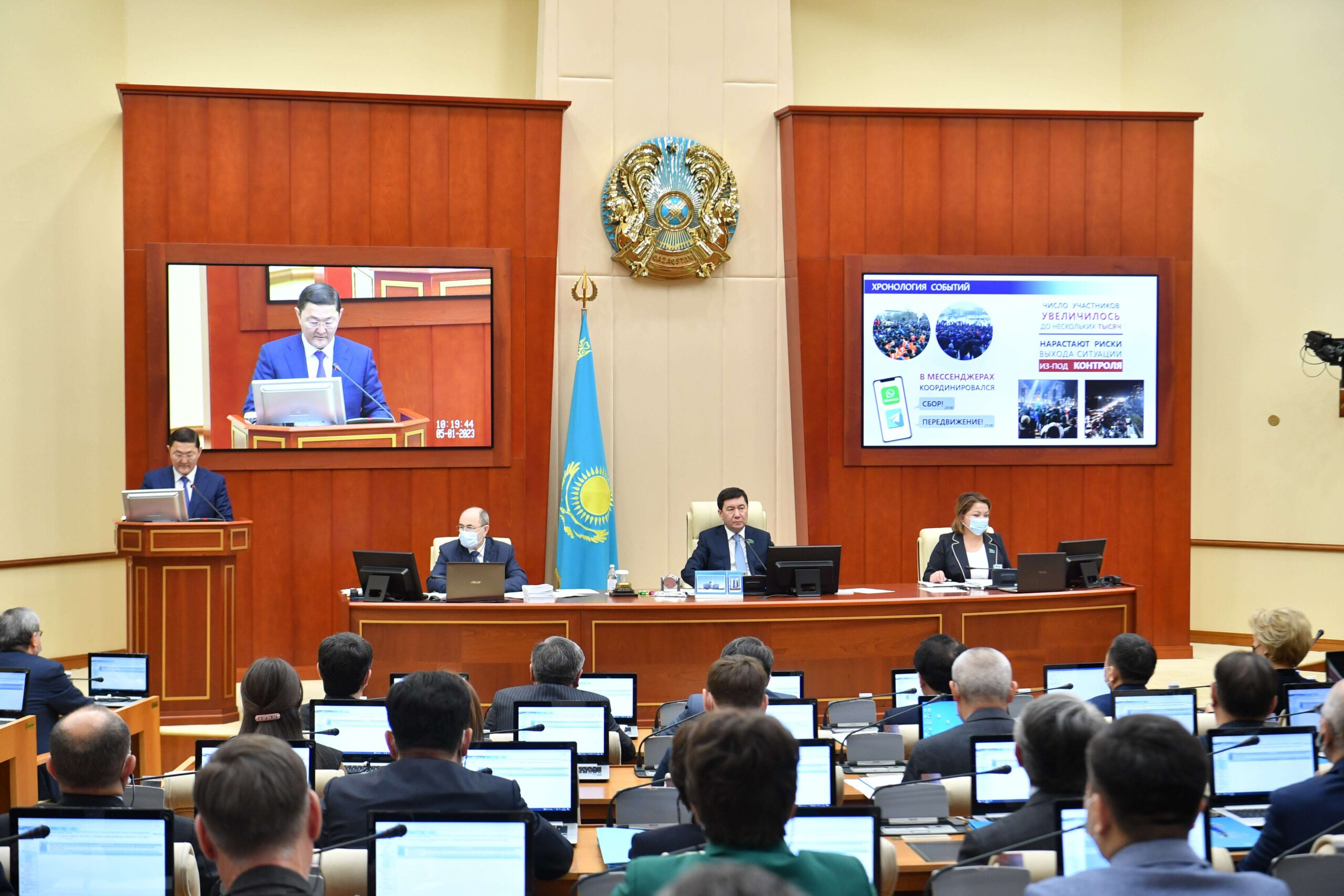 “All I can say is that throughout 2021 there was covert preparation of the perpetrators for radical measures. Organized criminal groups were among the perpetrators. They recruited people, armed themselves, and bought walkie-talkies and vehicles. The investigation revealed that some security officers were involved in this subversive work,” said Asylov.

Karim Massimov, who headed the National Security Committee at the time of the unrest and was dismissed in January 2022, is on trial for treason and abuse of power. Asylov said he could not disclose details, as the cases against Massimov, former defense minister Murat Bektanov, and 16 others are classified.

Akhmetzhanov said the police investigated 4,623 criminal cases related to the January unrest. Most of them are crimes of murder, theft, illegal trafficking of weapons, hooliganism, and intentional damage to other people’s property.

More than 20,000 citizens were questioned, and more than 5,000 examinations were assigned.

He also said that out of 983 people detained in criminal cases, 502 were handed over to special prosecutors.

“631 defendants have been brought to trial. Of these, 599 persons were convicted, including 455 to restriction of liberty, 132 to imprisonment, six to community service and six to a fine,” said the minister.

Speaking about the arms that were stolen when police departments in several regions were left abandoned, Akhmetzhanov said that 2,960 weapons and around 63,000 pieces of ammunition were stolen, and the ministry continues its search.

“More than 200 caches have been liquidated, with 4,160 weapons and 57,000 rounds of ammunition. Now 964 units of weapons were identified as stolen in January. The remaining 3,196, including seven grenade launchers and a machine gun, are being checked,” said the minister.

There were also reports of torture by police officers against detainees, but only a few reached the court.

According to Asylov, 329 criminal cases involving torture have been filed based on citizen complaints. Cases of torture of 27 individuals in Almaty region’s police stations and temporary detention facilities are now in court.

Responding to a deputy’s question about the incurred damage, First Deputy Prime Minister Roman Sklyar said that 31 billion tenge (US$66.1 million) was allocated to restore the damage. Thirty-seven objects were restored, and the Zhetisu Region’s city hall is expected to be restored in January.

Overall, all 356 commercial objects that were damaged have been restored. 16.7 billion tenge (US$35.6 billion) were compensated to 1,789 businesses that applied for damage compensation.

In a Jan. 5 post on his Telegram channel, State Counselor Erlan Karin wrote that the “reactionary forces took advantage of initially peaceful protests,” and their main goal was to “reverse the ongoing reforms and maintain the old order.”

“Our country then faced the threat of sliding into chaos and anarchy. It was literally a matter of minutes. Without any exaggeration, the preservation of our statehood was at stake,” he wrote, expressing high hopes for the continued democratization processes.

After hearing the official version of the events at the Mazhilis session, Mazhilis Chairman Yerlan Koshanov stressed the importance of ensuring the January tragedy does not happen again. Koshanov said it was a “conspiracy against independence.” “And only thanks to the decisive steps of the President, the unity and solidarity of our people, the heroism of ordinary police officers, doctors, volunteers and many others, we protected our statehood and did not allow the country to sink into chaos,” he said.

“Peaceful, justified demands of these citizens were used by revanchists. As a result of their political and extremist provocative actions, mass riots and armed attacks on government agencies occurred,” he said at the Mazhilis meeting.