ASTANA – Saudi Arabia is keen to strengthen cooperation with Kazakhstan for the interests of both peoples, Yahya Ahmad D Okeish, Chargé d’Affaires a.i. of the Kingdom of Saudi Arabia to Kazakhstan, said in an interview with The Astana Times, a few hours after the diplomats’ meeting with President Kassym-Jomart Tokayev at the Akorda on Nov. 4. 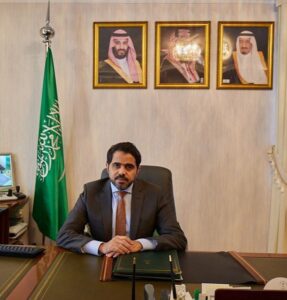 “Kazakhstan and Saudi Arabia share friendly and fraternal ties based on our ancient history and Islamic values. Saudi Arabia was one of the first to recognize the independence of Kazakhstan, signed inter-state agreements, and appointed ambassadors,” said Okeish, who arrived in Kazakhstan two months ago.

The ties between the two countries span beyond 28 years.

“Our relations go back to when Islam first arrived in the territory of Kazakhstan,” added Okeish.

One of the major figures strengthening the affinity between the two countries was Kazakh diplomat Nazir Torekulov, who in the 1930s became the first Kazakh diplomat to travel to Saudi Arabia to become Soviet ambassador.

“It was a very important visit, opening a new chapter in the cooperation between our countries. We have the Saudi Vision 2030 program and Kazakhstan has the 2050 Strategy. We try to find common ground for cooperation in these programs. The visit focused on a wide array of issues – political, diplomatic, cultural, security, economy and investments,” he said.

According to him, Kazakhstan capitalizes on its stability and the ample opportunities that can be offered to foreign companies.

“Kazakhstan is a stable state, it is very attractive to us. Kazakhstan has enormous opportunities, specifically in tourism, culture and economy. We also work in the OPEC+ [The Organization of the Petroleum Exporting Countries],” he said.

When he arrived, he said he was astonished to witness how active Kazakhstan is in the international arena, bringing up the sixth CICA (the Conference on Interaction and Confidence-Building Measures in Asia) summit as an example.

The officials from both sides are optimistic that the partnership has room to grow. During his July visit to Saudi Arabia, Tokayev confirmed that Kazakhstan can offer more than 100 processed goods types worth nearly $400 million a year in industries such as machinery, iron and steel production, as well as food processing and agriculture.

Meeting of the diplomatic mission with President Tokayev

Okeish also attended the meeting of the diplomatic missions at the Akorda where President Tokayev spoke about the ongoing reforms in the country.

“He [President Tokayev] personally stressed the importance of monitoring the implementation of agreements reached during his visit. I also told him that we had the same task coming from Saudi Arabia to us,” he added. “For me, like for all diplomats, it was a great honor to meet President Kassym-Jomart Tokayev. We are very thankful that he devoted the time to address us. He spoke about Kazakhstan’s nuclear non-proliferation, and environmental initiatives, among others”.

Okeish said that the embassy is studying opportunities to encourage more Saudi students to study in Kazakhstan, as part of the Kingdom’s scholarship program, similar to Kazakhstan’s Bolashak presidential scholarship.

“In terms of education, Kazakhstan has very good medical universities. We are working to invite Saudi citizens to study here. There are also famous universities in Saudi Arabia, like KAUST [King Abdullah University of Science and Technology], and we hope that Kazakh students will come to study there. Our hearts and doors are always open,” he said.

He also said that the embassy expects the launch of direct flights by FlyNas, a Saudi low-cost airline, on the Jeddah – Almaty route.

“I arrived less than two months ago, but I immediately felt the hospitality and politeness of people. Today, I witnessed how the President devoted time to greet and speak to each diplomat. It is part of the people here, starting from the president to citizens,” he said.

Okeish promised he would make every effort to visit the other regions in the country.