By Assem Assaniyaz in Business on 15 August 2022

NUR-SULTAN – Kazakh Minister of Energy Bolat Akchulakov announced a planned reduction of oil production by two million tons during his working visit to the Atyrau Region on Aug. 11-12, reported Kazinform. 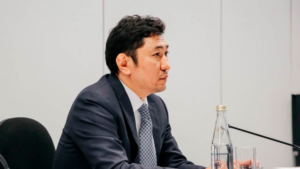 Kazakh Minister of Energy Akchulakov at an Aug. 12 meeting with the public in Atyrau. Photo credit: ortcom.kz

“The oil production plan has been adjusted. Our initial target was 87.5 million tons per year, but we revised it due to shipping opportunities and export routes. This plan is 85.5 million tons. We think we have every opportunity to fulfill and even exceed it,” said the minister at an Aug. 12 press briefing with the public in the city of Atyrau.

The changes are caused by the ongoing repairs at the Tengiz field, which reduced the volume of oil pumped via the Tengiz-Novorossiysk pipeline and the temporary shutdown of oil production at the Kashagan field due to a gas release, which resumed its operation on Aug. 10.

According to the minister, this year, oil production in the Atyrau Region has reached 48 million tons. Overall, for the seven-month period 27.7 million tons of oil were produced.

Akchulakov has visited the production facilities of the North Caspian Operating Company (NCOC), the Tengiz oilfield facilities, as well as the Kashagan oilfield.

More than 30 companies operate in the Atyrau Region, providing 55 percent of oil production in the country. The main share falls on the Tengiz and Kashagan oilfields.