NUR-SULTAN – Kazakh Prime Minister Alikhan Smailov spoke about the concept of a New Kazakhstan entails as well as the government’s efforts to make this concept a reality in his Aug. 25 interview with Tenginews. 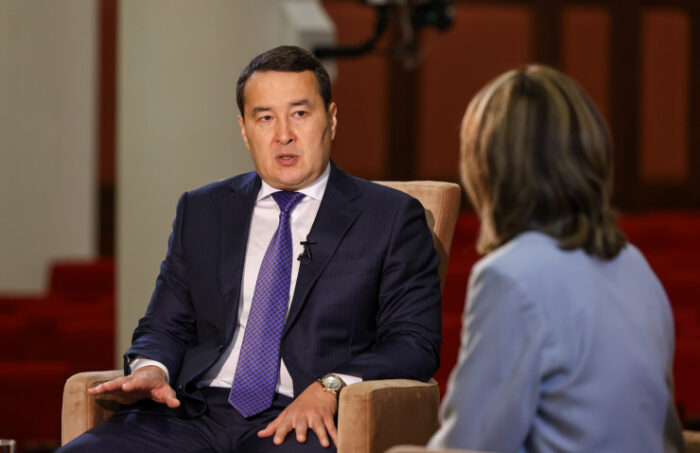 According to Smailov, a New Kazakhstan offers a favorable investment policy that promotes entrepreneurial freedom and competitiveness, among other principles, a country where every citizen has access to high-quality education, healthcare, and a well-developed social infrastructure.

To bring this enticing vision of Kazakhstan to life, the country’s government prioritizes macroeconomic stability to ensure economic development, expansion of business opportunities, and betterment of population well-being. Smailov also emphasized that in the new geopolitical realm where Kazakhstan finds itself today, the government is working on ensuring the production of domestic goods.

“Import substitution is very acute as well as the diversification of the economy,” he said.

When questioned if public servants sometimes use the global geopolitical circumstances and rising global inflation as an excuse to answer questions about food prices and the country’s socioeconomic position, Smailov reiterated that it is oftentimes not an excuse but a reality. According to him, Kazakhstan is a member of the global economy, and its economic context is heavily influenced by external factors.

“But this does not mean that we should sit idly by. We are taking a whole range of measures: the formation of stabilization funds and intervention in certain markets of socially important food products, forward purchases, price control, and antimonopoly response measures,” he explained.

Smailov said that Kazakhstan is keen on the investment sector. In the next five years, more than 750 projects worth 22 trillion tenge (US$46 billion) will be implemented. Of these 750 projects, 158 will be put into operation nationwide by the end of this year.

“We plan to reduce imports by $12 billion and increase exports by $20 billion. Furthermore, we have doubled agricultural financing to boost the marketable mass of domestic food products. We are doing this to reduce import dependence and minimize negative external influences,” Smailov said.

When asked why some of President Kassym-Jomart Tokayev’s instructions are being red taped in the government, which the President himself has mentioned a few times, Smailov specified that the head of state has given over 200 instructions to the new government since the beginning of this year, of which 130 have already been completed.

As claimed by Smailov, the other tasks are not being completed because they are of a long-term nature, and some require legislative changes and consultations with experts, the public, and the business community.

“If we decide without considering this, we may see some positive benefits in the short term. However, in the long run, we may lose strategically,” he said.

The Kazakh Prime Minister also disclosed that he and President Tokayev are in contact every day through phone and messengers.

“We communicate throughout the day, late at night, and early in the morning. The head of state sends critical information or gives instructions. As you see, we communicate 24 hours a day, seven days a week,” Smailov said.

The topic of the planned construction of the nuclear power plant was also discussed during the interview.

As Smailov said previously, Kazakhstan seeks international expertise in building the new nuclear power plant. At the moment, the government considers the experience of South Korea, France, and Türkiye. According to Smailov, Kazakhstan will choose the suppliers for nuclear technologies after an in-depth study of the expertise of various international companies.

Prime Minister Smailov also addressed public concerns about the use of nuclear energy. He argues that without it, the country will be unable to maintain its energy security. To meet rising energy demand, Kazakhstan would have to increase energy generation at the expense of coal, which is detrimental to the environment.

“The world is shifting toward decarbonization. We must transition to clean technology, and nuclear power is the answer. We should not be afraid of nuclear power plants. We will select the safest technology and suppliers who will be able to complete all of the work on schedule,” he said.

Smailov further asserted that the nuclear industry will bring a multiplier effect on the economy and a substantial impact on the country’s overall development.

As a member of the commission on combating illegal economic resource concentration, the Prime Minister also discussed the latest progress in the recovery of illegally obtained financial assets to Kazakhstan. According to him, up to 200 materials worth more than 500 billion tenge (US$1 billion) were turned over to law enforcement. The legislation was also amended to reduce capital outflows from the country.

“We canceled benefits on dividends paid abroad. We also restricted deductions for intangible services – consulting services – paid by our companies to their affiliated companies abroad. These standards have already been incorporated into the country’s Tax Code,” said Smailov.

The interview also addressed Western sanctions against Russia and their impact on Kazakhstan. According to the Prime Minister, the geopolitical conflict hurts global development. However, he stated that Kazakhstan has opportunities to increase investment projects by relocating businesses that have left the Russian market. He said that the government is already in the process of relocating some of them to Kazakhstan.

“More than 250 Western companies have left the Russian market, most of them are in non-commodity sectors. We invited them to work in our country. So far, 45 companies have accepted our invitation,” he said.

Among them are Skoda, GE Healthcare, Philips, and Honeywell, which only recently began production in Almaty.