By Saniya Bulatkulova in Culture on 22 May 2022

NUR-SULTAN – The Nickelodeon HD TV channel, a local version of the American TV channel, broadcasting cartoons, entertainment, sports, and music programs in Kazakh, was presented on May 18 at the Central Communications Service in Nur-Sultan, reported the Ministry of Information and Social Development. 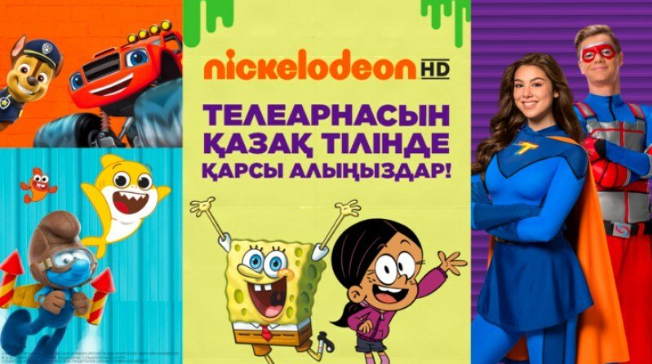 The most popular cartoons translated into Kazakh are SpongeBob SquarePants, PAW Patrol, ICarly, The Smurfs, Victorious and Alvin and the Chipmunks. Photo credit: yvision.kz

Approximately 800 hours of cartoons have been translated into Kazakh, while 354 episodes are expected to premiere by the end of the year. The channel, whose content has been created for preschoolers, primary and secondary school audience, and teenagers so far, is now available on the Alma TV and TV Commerce telecom services.

Initiated by the ministry in 2021, the project seeks to promote the state language among the younger generation. “The launch of the new channel will help to increase children’s interest in the state language learning and its correct use, as well as have an educational impact on children and teenagers,” said Vice Minister of Information and Social Development Daniyar Kadirov during a May 18 briefing.

Maria Kosareva, who serves as Paramount Global Vice President for Entertainment and Kids Brands Development in the Commonwealth of Independent States (CIS) and Baltic states, added that Nickelodeon will foster the improvement of emotional intelligence due to their interesting block programming.

Commenting on the channel’s content for the pre-school audience, Kosareva noted the importance of songs. “It is very important that the characters sing in the local language. Approximately 70 minutes of songs have been translated, that is a lot,”  she said.

Along with the Nickelodeon HD TV channel, a Kazakh version of the French TiJi TV channel was presented earlier to mark the Year of Children. The TiJi TV channel is available on Alma TV, TV Commerce, Kazakhtelecom, PRK Fermata, Kainar Media, Teralain and TTK.

While explaining the reasons for choosing Nickelodeon and TiJi, Kadirov said that  the ministry considered the outcomes of sociological surveys and the popularity of cartoons.

“According to the results of the research, Balapan TV channel ranked first, where the content is mainly broadcast in Kazakh, followed by Nickelodeon and TiJi TV channels. Cartoon Network, Karusel and Malysh TV channels were the last in the rating,” said Kadirov.

Acting Chair of Kazakhstan Institute of Social Development Kazbek Maygeldinov said the content of Nickelodeon and TiJi was examined for its impact on the psyche of children.

Launched in 1979, Nickelodeon is represented in nearly 180 countries, while its characters speak more than 40 languages.

TiJi was launched later in 2000 and became the first TV channel in Europe created specifically for preschoolers. It is represented in 20 countries and its content is translated into 14 languages.