By Zhanna Shayakhmetova in International on 4 December 2020

NUR-SULTAN – The India-Kazakhstan joint peacekeeping room was opened Nov. 27 at the Peacekeeping Training Center of the Kazakh Ministry of Defense in Almaty, reported the press service of the Embassy of India in Kazakhstan. 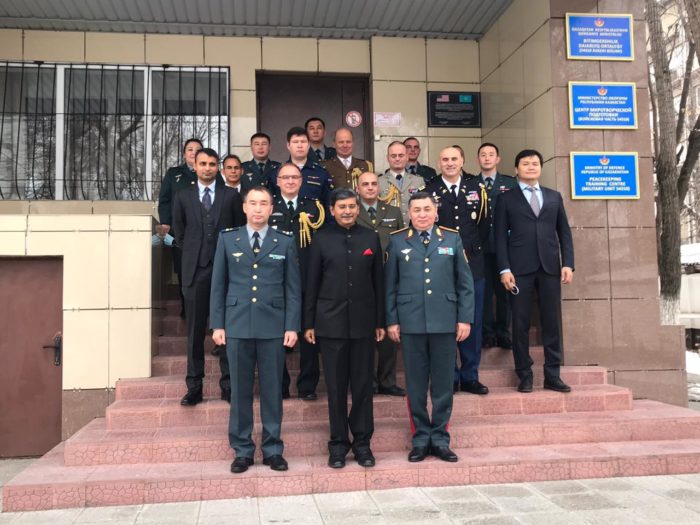 “The opening of the room marks yet another milestone in bilateral defense relations between the two countries and the strengthening of the strategic partnership between India and Kazakhstan,” reads the release.

Ambassador of India to Kazakhstan Prabhat Kumar said that the room for joint training of peacekeepers is a gift from India. It will serve as a good incentive for more comprehensive training of military personnel of the Kazakh Armed Forces and deliver training to the peacekeeping contingent from Kazakhstan for future missions as part of the United Nations’ peacekeeping initiatives.

Kumar also noted the long-term peacekeeping interaction between the two countries in the United Nations Interim Force in Lebanon (UNIFIL) mission and praised the Kazakh military contingent for their professionalism.

The training center offers courses for peacekeepers of the Armed Forces. Military personnel take part in psychological testing, English language proficiency tests and have practice as part of the combat training program for peacekeeping units of the Kazakh troops. The preparation course is carried out according to international standards.

“We appreciate India’s support in the implementation of Kazakhstan’s peacekeeping missions. Today’s event confirms the interest of the defense departments of Kazakhstan and India in the further development of relations to strengthen peace and security,” Kazakh Vice Minister of Defense Major General Mukhamedzhan Talasov said.

The parties also discussed the participation of the Kazakh peacekeeping company as part of the Indian contingent in the UN mission, as well as the further development of bilateral cooperation in the field of defense at the bilateral meeting.

India has been involved in UN peacekeeping efforts since 1955. Kazakhstan’s first UN peacekeeping contingent joined the Indian battalion to perform its activities in the UNIFIL mission in 2018.

Earlier, it was reported that a unit of 120 Kazakh peacekeepers would join a six-month UN peacekeeping mission in Lebanon to patrol a 16-kilometer section of the Lebanese-Israeli border in February of 2021. The fifth peacekeeping unit started its training in November 2020.