By Aidana Yergaliyeva in Society on 28 May 2020

Similarweb, a New-York based web analytics service for businesses, ranked the Kazakh Kundelik school learning management website among the top 50 educational resources in the world. The list is calculated by measuring the amount of global web traffic, which is calculated by the number of page visits and visitors. Kundelik stands 41st on the list. 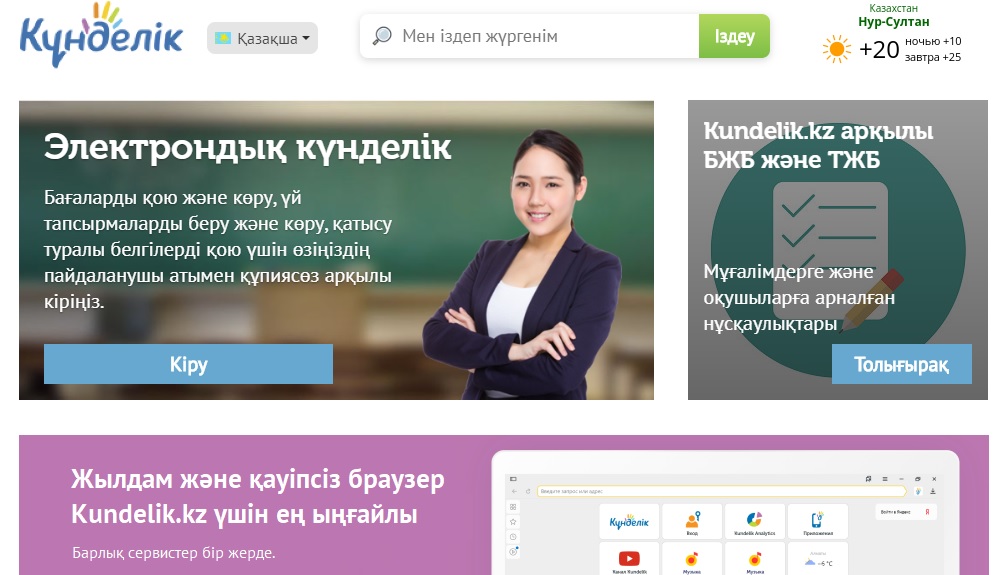 In April, the website achieved a total of 26.01 million visits and jumped 16 spots up compared to its ranking in March. An average user spent 12 minutes and 27 seconds and visited 16.88 pages per visit.

Kundelik is enjoying its current level of success because it is creating a place where students can download and upload their homework and check their schedule, while parents can diligently monitor their academic progress. Naturally, teachers can upload various assignments and then grade them. The students and teachers are exchanging messages and have discussions in groups.

A screenshot from Similaweb top 50 ranking. The red rectangle distinguishes Kundelik’s  41st place on the list.

The Kazakh Ministry of Education launched the service in 2016. Over the four years, Kundelik has been updating and fixing its bugs to ease parent to teacher communication and to make the learning process more transparent. All students, ranging from primary to high school have been using the website.

The shift to distance learning at schools made Kundelik the third most popular web resource after Google and YouTube in Kazakhstan. In the lockdown months, from April till May, the number of unique users reached nearly one million per day, which is two times more compared to the same period in 2019, according to informburo.kz.

On April 6, the first day of the final term at Kazakh public schools, the website had reached its all-time peak of two million unique users and 49 million views in a day.

Over 330,000 teachers worked with the website and distributed approximately 20 million homework, and 2.8 million students uploaded their homework to the system. The students who had problems using the website received their homeworks and feedback with alternative apps like WhatsApp.

In total, over 5.5 million users are registered in the Kundelik, of which 95 percent are active. Kazakh users obviously make up the biggest bulk of the traffic, at 92.17 percent. Interestingly, there are also visitors from the U.S.A., Russia, Iran, and Sweden that use 5.3, 1.07, 0.70, and 0.27 percent of the total traffic, respectively.

On May 25, instead of the annual festive celebrations marking the end of the academic year at each school, school students got to listen to the speech of Kazakh Minister of Education and Science Askhat Aymagambetov on national television channels. The minister summed up the event of the year over a live video conference.

“For all of us, this May 25th is taking place under unusual circumstances. The pandemic has forced us to make major changes in our lives. This academic year will be remembered for its total transition to distance learning by more than four million students. In a short period, each of you managed to restructure and readjust. This is no mean feat and credit must be given to teachers, parents and students for what they have accomplished. Today I want to congratulate all of you, you are all heroes who proved that you can thrive in these new conditions,” Kazakh Minister of Education and Science Askhat Aymagambetov said.