By Elya Altynsarina in International on 19 June 2019

NUR-SULTAN – Kazakh President Kassym-Jomart Tokayev participated in the June 14-15 plenary session of the 5th summit of the Conference on Interaction and Confidence Building Measures in Asia (CICA) and met with CICA member nations leaders in Dushanbe. 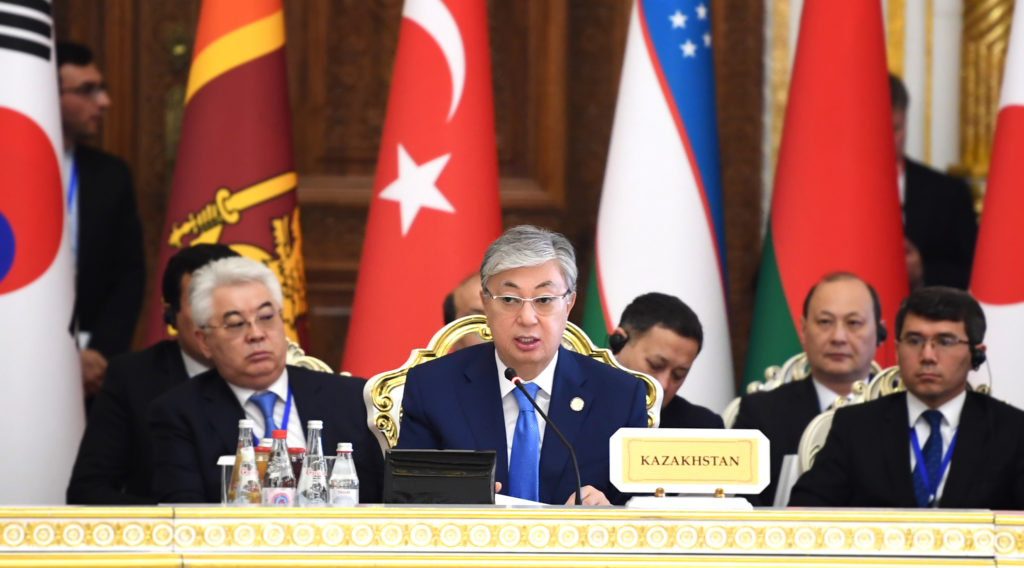 “Today, CICA is an authoritative multilateral structure uniting 35 states of the Asian region and about half of the population of our planet,” said Tokayev.

Tokayev also expressed concern about growing security threats and ideological and ethnic and religious tensions in the region. He presented Kazakhstan’s vision to address those issues, including the need for systemic and integrated approaches.

“We urge all friends and partners to join efforts to improve the efficiency and international competitiveness of the Conference. To do so, we need its step-by-step, gradual transformation into a full-fledged regional organisation,” he said.

Tokayev noted CICA now has a legal framework with permanent structures and is ready for the institutional development.

Synergy between the conference and the Organisation for Security and Cooperation in Europe would facilitate plans for cooperation across Eurasia and subsequently other multilateral institutions of Asia and Europe.

It will help resolve through negotiations conflicts as they occur and help build under CICA a system to carry out international mediation.

Tokayev also emphasised the development of joint systemic approaches to counter international terrorism. For instance, the Code of Conduct on achieving a world free of terrorism, adopted at the 73rd session of the UN General Assembly and supported by 82 states, could serve as a starting point in developing proposals to prevent terrorism threats in the CICA space.

The Kazakh President also suggested establishing a fund to finance conference projects and programmes to facilitate expert support for the conference and strengthen its analytical centres by transforming them into a permanent dialogue platform.

“We also consider studying the creation of the Council of Wise Men, which would generate proposals for the working bodies of the Conference,” he said, adding that implementation of the initiatives would bring CICA cooperation to a new level and allow the organisation to meet its potential.

A declaration of the summit was adopted following the meeting.

On the sidelines of the CICA gathering, Tokayev also met with the leaders of member states.

Tokayev and President of Tajikistan Emomali Rahmon noted the countries’ long-standing bilateral relations and the importance of Tokayev visiting Tajikistan during his first foreign trip after the election. Rahmon also said cooperation with Kazakhstan is a Tajik foreign policy priority.

“We are aware of Qatar’s investment potential. We are interested in expanding the interaction of our states, including the formation of the necessary mechanisms to attract investment,” said Tokayev.

At a meeting with President of the Turkey Recep Tayyip Erdogan, the two leaders invited each other to pay official visits.