NUR-SULTAN – Kazakhstan’s national football team ranked fourth in the Union of European Football Associations (UEFA) Euro 2020 qualifying’s Group I after Belgium, Cyprus and Russia, but ahead of Scotland and San Marino. 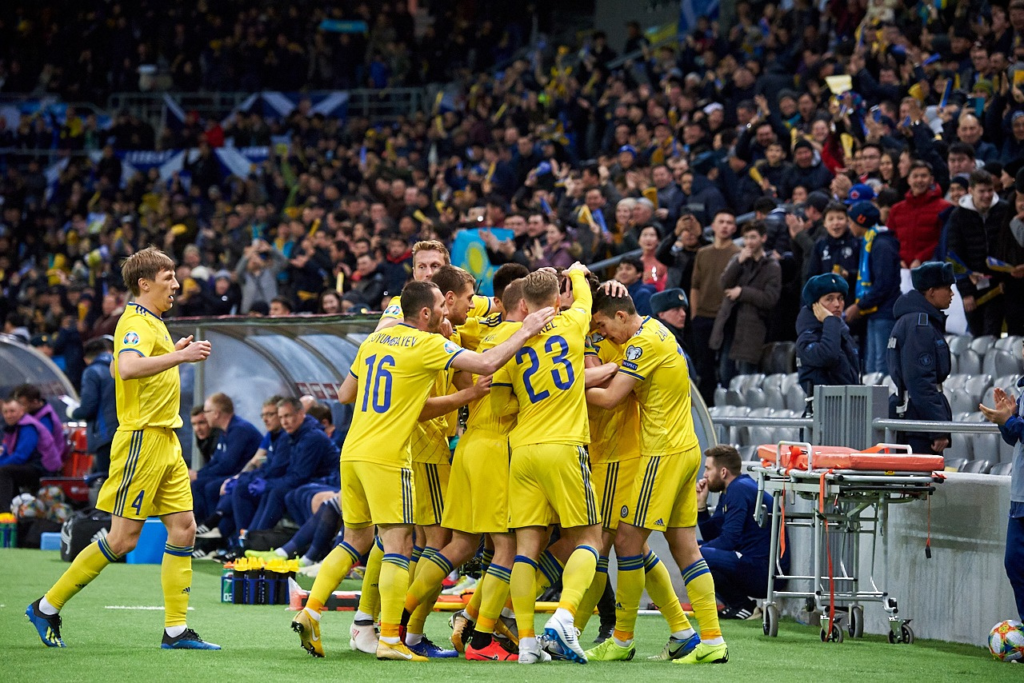 The Kazakh team scored the first goal in the sixth minute of the game. Kazakh player Alexander Merkel passed to Yuri Pertsukh, who made a sharp kick under the crossbar.

In the tenth minute, the Kazakh team scored the second goal. Team captain Islambek Kuat made a cutting pass to the corner of the goalkeeper’s square to Yan Vorogovskiy who was breaking in and got it past Scottish goalkeeper Scott Bain.

The Scottish team tried to break through the Kazakh team’s defence, but the Kazakh defenders held back the attacks.

In the 28th minute, Kuat tested the Scottish goalkeeper for vigilance, kicking the ball from the middle distance under the crossbar only to be deflected by the goalkeeper.

The first half of the game ended with a score of 2:0.

In the fifty-first minute Kazakh player Gafurzhan Suyumbayev passed the ball to teammate Baktier Zainutdinov, who scored the third goal with a header.

In the fifty-fifth minute, Kazakh goalkeeper Dmitro Nepogodov stopped a shot by Scottish player Stuart Armstrong from the close range.

In the second match of the UEFA Euro 2020 qualifying tournament, Kazakhstan played against Russia, again on Astana Arena.

“We can, want and will try to make a surprise to the fans. We will need to play as one team: disciplined, orderly and compact. We respect our rival and know their strengths. We had a good game in the first round, and we are in a good mood,” said Kazakh National Team Head Coach Michal Bilek at a March 23 press conference after the game with Scotland.

“There is no euphoria. We are preparing for the match with the Russian national team. They have a good team. We have shown our level and we will prepare further,” said Kuat.

This time, the Russian team won 0:4. In the 19th minute, Russian player Alexei Ionov passed from the right flank to his teammate Denis Cheryshev, who kicked the ball into the goal of Nepogodov.

By the thirtieth minute, Kazakh player Yuri Logvinenko was unable to continue the match due to injury. Vorogovsky replaced him.

At the end of the first half, Kazakhstan earned a free kick, which Baktier Zainutdinov performed, but he hit the wall.

In the fifty-second minute, the Russian team scored the third goal. After ten minutes, the team earned a free kick. Cheryshev assisted and Kazakh player Abzal Beisebekov accidentally cut the ball into his own net.

“We analysed Kazakhstan (team’s game) well. We knew their strengths and weaknesses. I would not say that we beat the class. We just used the opponent’s weaknesses,” said Russian team defender Andrei Semenov.