ASTANA – The ninth Astana Process talks on Syria ended May 15 in the Kazakh capital with three guarantor states – Iran, Turkey and Russia – reaffirming their commitment to maintaining a ceasefire regime and four de-escalation zones established in the war-torn country based on the agreement the three states signed in May 2017. 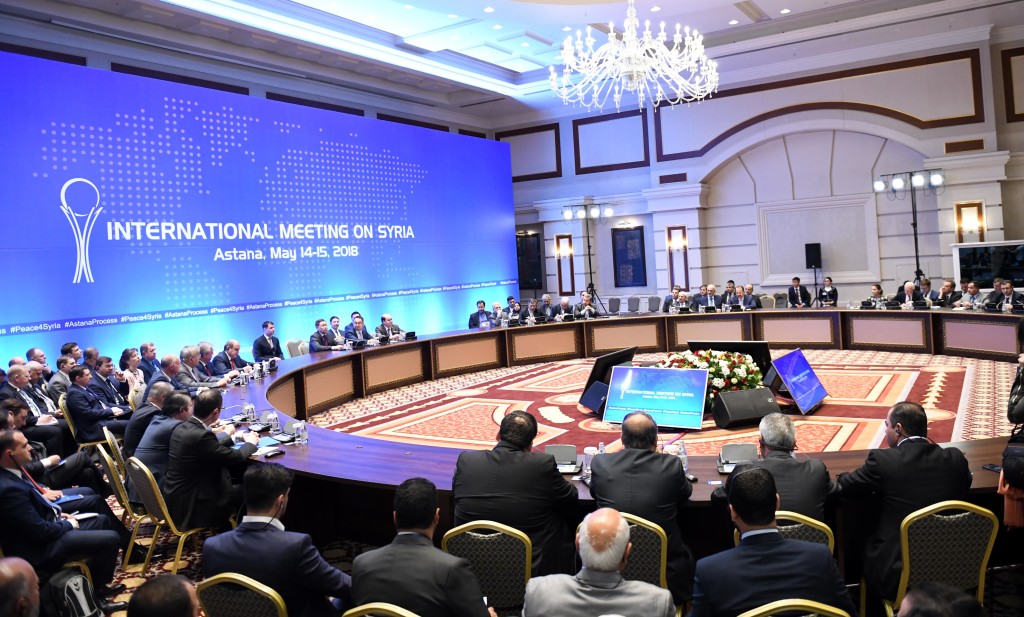 A joint resolution issued by the three states said the next meeting will be in Sochi in July. The statement stressed the effectiveness of de-escalation zones in “maintaining the ceasefire regime, reducing the level of violence and stabilising the overall situation in Syria.”

In their resolution, Iran, Russia and Turkey emphasised the need to create conditions for the Syrian people to “restore normal and peaceful life and to this end ensure rapid, safe and unhindered humanitarian access and safe and voluntary return of refugees and internally displaced persons to their original places of residence as well as free movement of local population.”

The ongoing conflict that entered its eighth year in March has killed an estimated 465,000 Syrians with more than one million injured and more than 12 million Syrians, half of its initial population, displaced.

Though the latest round showed little progress in seeking a political solution to the conflict, the Syrian government delegation headed by Syrian Ambassador to the United Nations Bashar al-Jaafari expressed satisfaction with the two-day, closed-door negotiations and said they would “continue the fight against terrorism and colonial regimes that wanted to divide Syria.”

“We would like to highlight that we confirm commitment to the integrity and sovereignty of the Syrian Arab republic,” he told a press briefing wrapping up the outcomes of the talks.

“It is the result of the work of our armed forces done in cooperation with our friends and brothers. The Syrian Arab Republic will continue its fight to liberate the whole country and against those countries aggressors against the sovereignty of Syria,” said the Syrian diplomat.

Head of the Syrian opposition group Ahmed Toma raised the issue of detainees that remains of paramount importance to the armed groups.

“There is another positive step in terms of detainees and abductees. We would like to ensure the ongoing mechanism which would regulate the issue of detainees on the basis of previous round held in September. We agreed on the creation of mechanism responsible for regulating the process of detainees. We want to develop this issue more clearly,” said Toma at a briefing.

Constitutional reforms, he noted, should be held in parallel with other processes and favourable conditions should be created for the constitutional committee.

The issue was also present on the agenda of the April tripartite meeting of presidents Vladimir Putin, Recep Erdogan and Hassan Rouhani in Ankara, with the three guarantor states reiterating the need for constitutional reforms and a new constitution.

Syrian opposition representative Yasser Abdul Raheem criticised Russia’s actions in Syria and said the delegation would not be present in Sochi.

“We will not go to Sochi, because we should respect our people. The ongoing killing of Syrian people by the Russian forces should be put to an end,” he said.

“Russia must reconsider its position and what they want,” he added.

Head of the Russian delegation Alexander Lavrentiev said he hopes the opposition groups will be present at the Sochi meeting that will focus on humanitarian and political aspects.

“The Astana Process and previous meetings are helpful in facilitating the Syrian dialogue in Sochi. It is time to open a new chapter of the Astana Process making focus on humanitarian and political aspects,” he said.

The agreement on de-escalation zones adopted in May 2017 was “historical,” according to him, though hostilities did not cease there, including the recent events in the Eastern Ghouta.