By Kseniya Voronina in Business on 8 December 2015

ASTANA – A new 20,000-tenge bank note, considered one of the most secure bank notes against counterfeiting, was launched by the Kazakh National Bank Dec. 1. 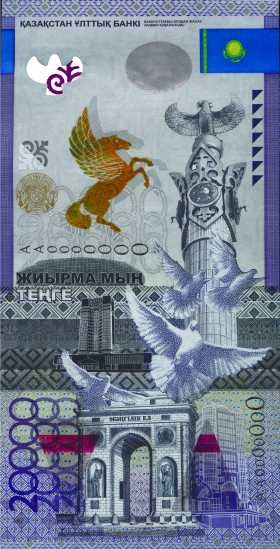 “The new bank note is one of the most secure bank notes in the world. The most up-to-date innovations and classical technologies were used for its production. One of them, trans-illuminated from both sides, is a composite thread mark in the form of the Samruk mythical bird and its contour lines in the form of a transparent window,” said a representative of the National Bank.

This bank note was created in 2013 and was signed by then-Chairman of the National Bank Grigory Marchenko, who planned to dedicate it to the 20th anniversary of the tenge in November 2013. Its design is similar to other bank notes: its face contains mainly vertical pictures; the back, horizontal. Its dimensions are 155 millimetres long and 79 millimetres wide. The note is grey blue.

The Flying Horse and Mangilik Yel triumphal arch are represented on the face of new 20,000-tenge bank note. The Flying Horse is used in many cultures, including by Turkic peoples and nomads, as a symbol of light, life, inspiration and fertility, singlemindedness and might. Below it, in the centre of the bank note, is a picture of the Mangilik Yel triumphal arch, the symbol of eternal freedom of the state. 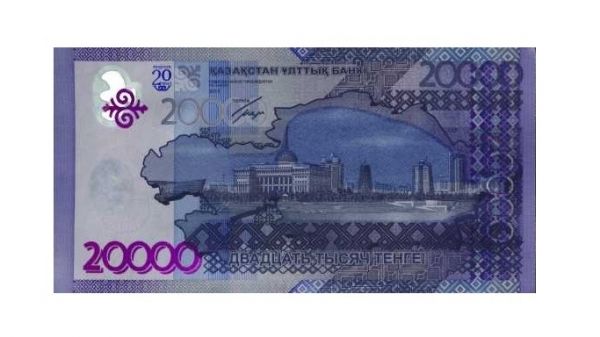 The back side of the bank note contains a contour line of the Kazakh map and a panoramic sketch of Astana with the Akorda, Parliament and government buildings.   The new 20,000 tenge bank note also has special visual elements for people with poor eyesight.