ASTANA – Twenty deputies from 17 regions and cities of Astana, Almaty and Shymkent were elected to the Senate, an upper chamber of the Kazakh Parliament, on Jan. 14, out of 55 candidates that were competing for the seats, according to the final results announced by the Central Election Commission (CEC) at a Jan. 16 meeting. 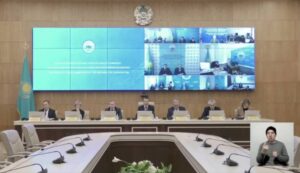 A screenshot from the meeting’s live broadcast depicting CEC members.

Of the 20 elected deputies, three, or 15 percent, are women who represent Astana, Almaty and the North Kazakhstan Region.

The average age of the elected deputies is 53.8 years.

The voter turnout nationwide reached 91.7 percent or 2,904 voters out of 3,167 maslikhat (local representative bodies) deputies included in the voter lists.

The elections had 235 local observers.

President Kassym-Jomart Tokayev announced the date of the Senate election during his inauguration ceremony on Nov. 26, saying that the election is part of a broader program of political renewal of the country’s system of government.

Based on Kazakh election law, among the 50 deputies in the Senate, 40 are elected through indirect suffrage by electors and ten senators are appointed by the President. Five of them are to be proposed by the Assembly of People of Kazakhstan, an advisory body chaired by the President and aimed at representing the various ethnic groups that make up Kazakhstan.

Elections to the Mazhilis, the lower chamber of the Parliament, and maslikhat, local representative bodies, are expected to be held in the first half of 2023.