By Dana Omirgazy in Kazakhstan Region Profiles: A Deep Dive Into the Heart of Central Asia, Nation on 9 January 2023

ASTANA – Kazakh citizens witnessed hundreds of endangered Saiga antelopes racing along the streets and roads in one of the villages in the Ulytau Region, reported the Khabar 24 TV channel. 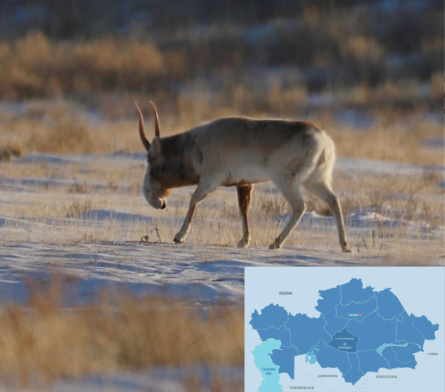 Since 1996, the saiga has been included in the IUCN’s (International Union for Conservation of Nature) Red List. Photo credit: Association for the Conservation of Biodiversity of Kazakhstan (ACBK)

Ecologists believe this is a one-of-a-kind case because steppe antelopes are extremely rare in Central Kazakhstan. Additionally, they typically travel south in the winter. This year, however, this did not occur, possibly due to human activity. Due to fences and other security constructions, new highways and railway lines, which saigas cannot cross on their own, the animals’ typical migration paths have changed. As a result, they are forced to seek alternative routes.

The Altyn Dala (golden steppe) Conservation Initiative, which aims to conserve and restore steppe, semi-desert, and desert ecosystems across the historical range of the Saiga antelope, which was on the verge of extinction due to hunting and habitat loss, was named one of the top ten UN World Restoration Flagship programs at the 2022 Montreal Biodiversity Conference last month (COP 15).

The Kazakh government allocated an area of 750,000 km2 to create a haven for endangered animals. The initiative helped bring the Saiga population from just 50,000 in 2005 to up to more than 1.3 million in 2022.