The Saga of the Saigas: Once Endangered Red Book Species Now Threaten Cattle and Farmlands

By Saniya Bulatkulova in Kazakhstan Region Profiles: A Deep Dive Into the Heart of Central Asia, Society on 17 July 2022 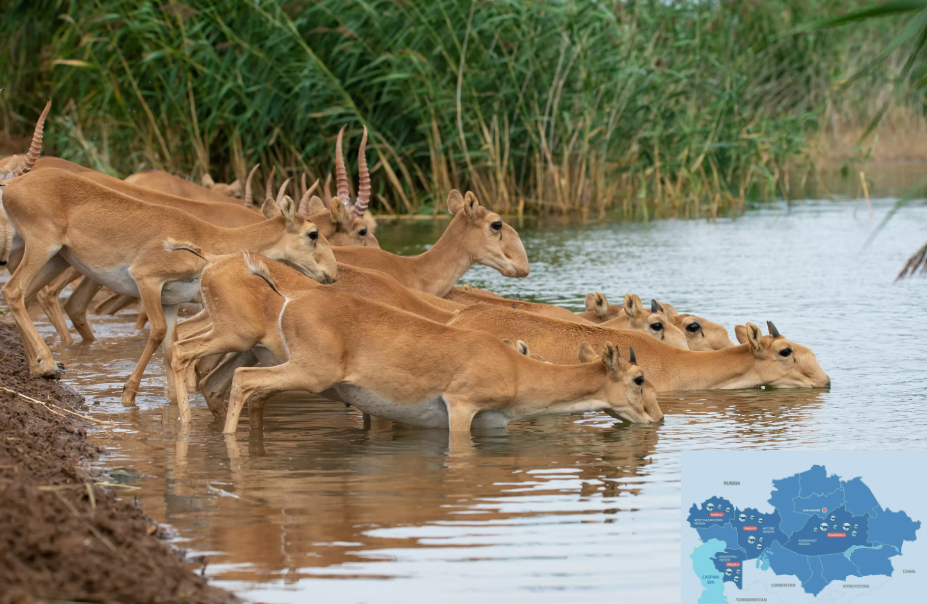 Being a migratory species, saiga lives in large herds, usually up to 1,000 individuals. Photo credit: wwf.ru. Click to see the map in full size

He called the saiga, which is a small antelope with distinctive short trunks, a “sacred animal” for the Kazakh people. The saiga is a small cloven-hoofed animal with a body length of around 110-146 centimeters and a weight of approximately 23-40 kilograms.

The saiga is easily recognizable by its humped nose. The males have horns growing up to 30 centimeters. It is a migratory animal that easily covers long distances and can swim across small bodies of water.

“There is a proposal to eliminate 80,000 saigas, which means to kill them. There are, apparently, other methods. Consult with experts as these are desperate measures. I do not exclude that we might be forced to do it. But, I stress, this is an extreme measure. It is necessary to properly examine this question,” said Tokayev. Saiga was depicted on the postage stamp of Kazakhstan in 2013. Photo credit: Wikipedia

Overall, 95 percent of the world’s saiga population is concentrated in Kazakhstan, while the remaining 5 percent inhabit Russia and Mongolia.

To date, the country hosts 489,000 Betpakdaly saigas in central Kazakhstan, 28,000 Ustyurt saigas in Mangystau and Aktobe Regions, and 801,000 Uralsk saigas in the West Kazakhstan Region. The population of animals had increased significantly over the past two years, reaching 1,318,000 in April.

The regulation of saiga growth is now widely debated in Kazakh society because the growth of the animal population began to have a negative impact on the rural economy.

On July 7, representatives of the Kazakh Institute of Zoology, Ministry of Ecology, Geology and Natural Resources, Veterinary and Biotechnology Research Center, local farmers, as well as ecologists from the Association for the Conservation of Biodiversity of Kazakhstan (ACBK) and Association of Practising Environmentalists gathered to discuss the regulation of the saigas’ number. 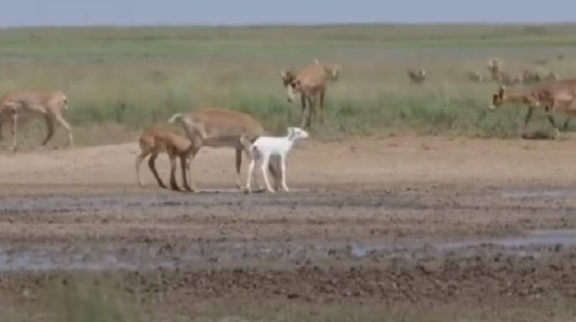 A fragment from video, where a baby saiga with white wool was was grazing with other individuals in Kazakh steppes in May. Photo credit: Qazaq Expedition Club’s Instagram

In June, farmers stated they are afraid to lose nearly 50 percent of the crop as saigas move onto their fields.

“Last year I lost 8,200 hectares. This year, the damage will be more, because there are more species. Every morning I go to safflower fields and I capture on video tens of thousands of saigas there. I have already plowed 2,000 hectares this year and nothing will grow there,” said АgroMarTrade company head Magomed Dzeitov during the meeting.

According to Zoology Institute’s Theriology Laboratory Head Alexey Grachev, the mismatch between the saigas’ number and the available food supply, open conflict with farmers and significant damage to the rural economy necessitate regulation of the saiga numbers.

In their turn, zoologists noted that saiga population’s growth might cause epizootic, a disease affecting animals of one kind at the same time. Once in 2015, the country lost a record number of 150,000 Betpakdaly saigas because of this infection.

How to regulate the saigas’ population

Natural scientist Saken Dildakhmet was among those participants, who proposed ways to solve the issue.

He said that the number of 1.3 million saigas is not a figure that can be regulated today, therefore it is necessary to increase the number to two or three million to take the action further.

Grachev agreed with Dildakhmet about the Ustyurt saigas number, adding that there are no laws which regulate the hunting of animals and their horns. The optimal number of saiga population taking into account human impact has not yet been defined.

Grachev proposed to extend the current ban on saiga hunting until 2025 and task the Okhotzooprom national company, which is in charge of environmental protection, to regulate the animal numbers.

Even though the current situation has severe risks both for farmers and the saiga population itself, the problem was completely different after the collapse of the Soviet Union.

Conservation of the saigas species

According to ACBK, the number of animals in the country decreased by 50 times from one million to slightly more than 20,000 between 1992 and 2003 due to intensive hunting and poaching.

Since 2004, the number has been gradually increasing due to environmental protection measures. 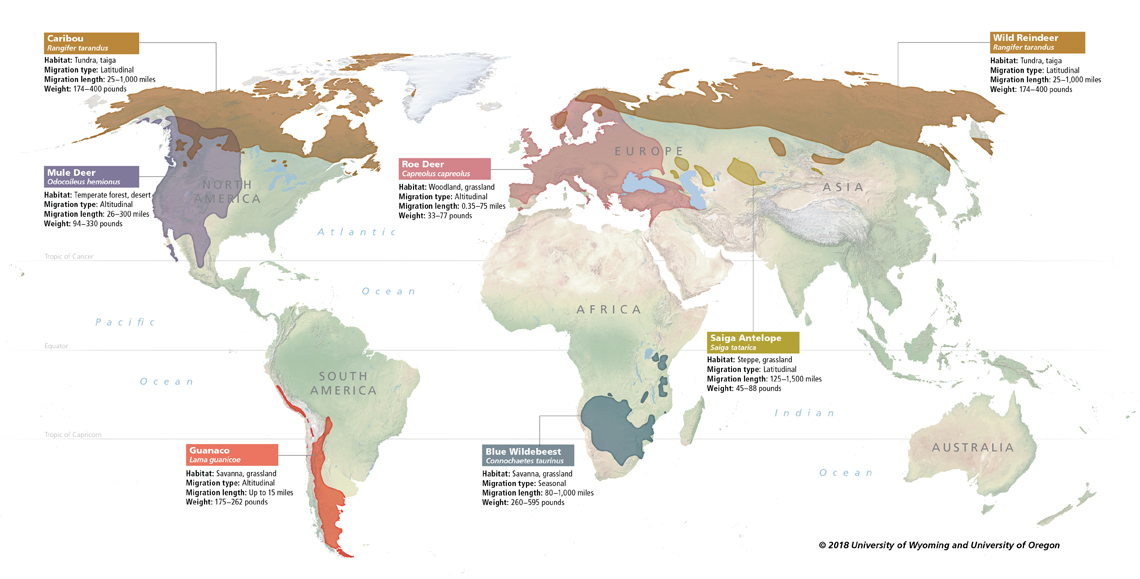 One of them is now being implemented by ACBK. They collect data on saiga migration routes, which will be included in the world’s first Global Atlas of Ungulate Migration. The document featured information on 48 ungulate individuals and is expected to be released in 2023.

The leading specialist at the ACBK Saiga Study Department Albert Salemgareyev said in an interview with The Astana Times that saigas are extremely important for the steppes.

“They play an important role in our ecosystem as steppes need grazing. The saiga antelopes feed on plants and transport them, so that the grass becomes shorter. In this way, they create a favorable environment for rodents and birds who need low grass,” Salemgareyev said.

Sustaining traditional migration routes is considered a crucial issue not only due to saigas’ role in Kazakhstan, but across the globe.