Saltanat Tursynbekova: Presidential Candidate With a Strong Social Agenda and Commitment to Defend Rights and Interests of Underrepresented Groups

ASTANA – Saltanat Tursynbekova is running for the office of the president in the upcoming elections in Kazakhstan and her election program stands out because of its emphasis on a strong social agenda, a response to the many voices she has heard over her years in public service and during her campaigning in the country’s regions. Tursynbekova spoke to The Astana Times about key messages in her election platform. 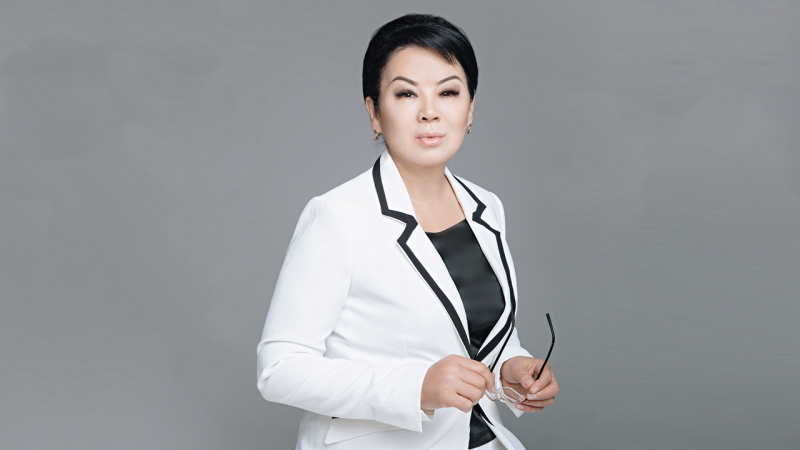 Saltanat Tursynbekova was nominated by Kazakh Analary – Dasturge Zhol (Kazakh mothers are a path to traditions) public association on Oct. 11.

Tursynbekova, 56, is a native of the Zhambyl Region in southern Kazakhstan. She is a graduate of Al-Farabi Kazakh National University with a degree in history and social science and the Moscow State Law Academy with a law degree.

She has more than 10 years of experience in senior positions in public service, including in the Prosecutor General’s Office, and for the last five years, she has been engaged in social work.

Growing up in a family with many children, she said that her parents taught her “simple human qualities” by their own example. Diligence, self-discipline, honesty and responsibility, trust and respect for people are what determined her life principles both in the service and in how she raises her children.

Since the start of electoral campaigning on Oct. 21, she has traveled to seven regions in the country. Her electoral office has been relatively very active on social media as well. 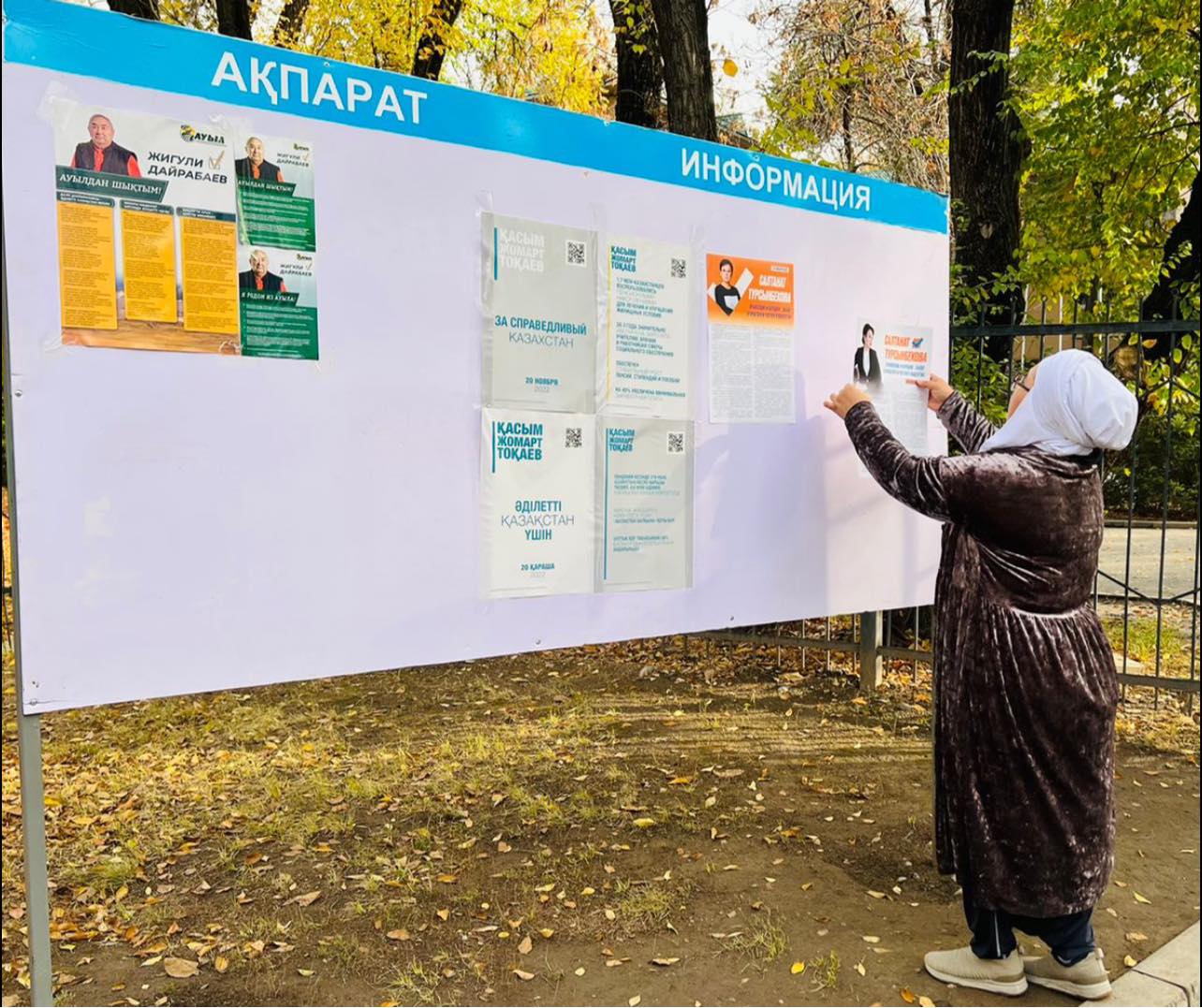 “Before that because of my public work, I visited almost every region. I already knew from my work what concerns people,” she said.

Need for judicial and legal reform

Tursynbekova’s platform focuses on the rule of law, without it, “arbitrariness and chaos ensue in the country.”

“If we want to build a truly democratic, legal and social state, the person, his or her life, rights and freedoms must become the highest values in practice, not in words,” she said.

Legal reform is needed in the fight against domestic violence, a problem that Tursynbekova has stood up for over the years of her public service and which now stands atop her electoral platform, unlike with the other candidates.

Tursynbekova was one of the initiators of a draft law on domestic violence, which, however, has not yet passed to the Senate, and headed the Kazakhstan Without Domestic Violence social project launched in 2017.

She chose the orange color for her electoral program to reaffirm her commitment to fighting all forms of violence, as the color orange symbolizes a future free of violence and is used as the color of the International Day for the Elimination of Violence against Women. 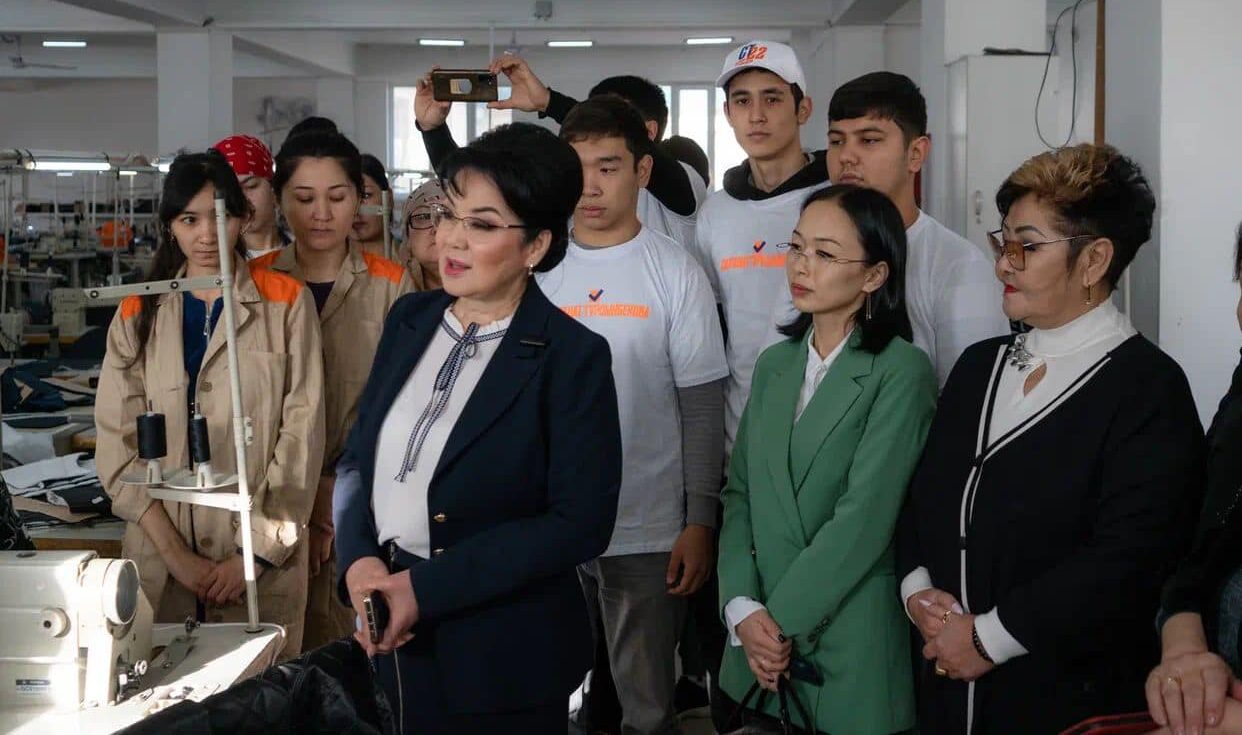 According to Tursynbekova, domestic violence and child abuse have become commonplace, while the number of child abuse and suicides is on the rise. She cited the data, which indicates that more than 80,000 administrative offenses were committed in the family and domestic sphere in 2020-2021 alone, with women and children subjected to violence in 117 families per day.

She proposes to tighten legislation for committing offenses of intentional infliction of minor injury to health and develop new legislation to address domestic violence.

If elected, she also promises to tighten legislation on the protection of animals and support for animal shelters.

She advocates for a more accessible judicial system for citizens.

“We have a certain process to appeal to judicial authorities, But the existing system, unfortunately, is not accessible for ordinary citizens. The procedural order, as our citizens point out, is very distant from the people, and all the arguments that citizens bring about violations of procedural law are not always heard by the courts and higher authorities,” she said. 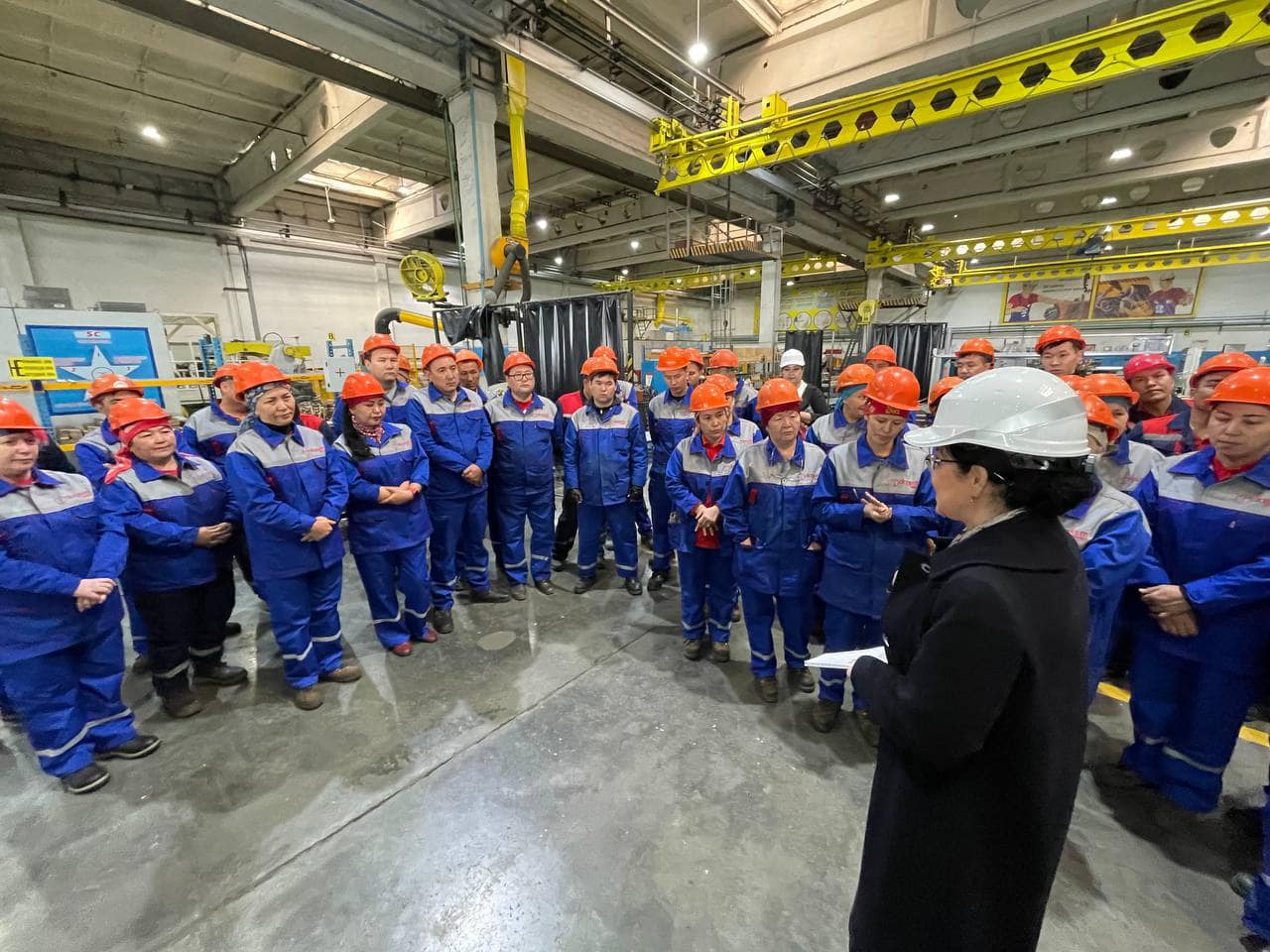 She met with employees at the Kentau transformer plant on Nov. 1 in the Turkistan Region. Photo credit: Tursynbekova’s Facebook account

Tursynbekova’s election program proposes to increase the minimum wage and minimum subsistence level, develop a program to fight poverty, develop a social housing program, allocate premises to social entrepreneurs for rent free of charge, introduce legislative changes to support single-parent families, lower the retirement age for women to 58 years as well as for persons caring for people with disabilities and those with a disability from childhood.

Tursynbekova does not consider the current level of benefits and pensions enough to cover the most basic needs of families. Contrary to that, the government spent around 4.5 trillion tenge to support private banks in 2017-2018 alone and the situation is similar in the quasi-state sector, where instead of generating income and directing it towards the well-being of the people, holdings bring damage and losses to the state treasury.

“Over the past two and three years, much attention was paid to mothers of many children. Women raising children in single-parent families are also approaching me. We met them. At the legislative level, they dropped out of the list of priority housing, they cannot participate in the existing programs. There are a lot of contradictions and inconsistencies between legislative norms and real-life situations,” she said.

Her social agenda also includes measures to improve the quality of life for people with disability and other physical and mental challenges.

“Despite the improvement of legislation in recent years, quality of life, and provision of services are not at a sufficient level [for people with disabilities]. Barriers are almost in every sphere. For example, if big cities can ensure ramps or other special conditions, it is not possible in rural areas,” she said. “Rehabilitation centers are not enough for parents who raise children with special needs, especially for people living in remote rural areas who do not have transport and a chance to get to a center.”

She emphasized the need to involve civil society and the public in political decision-making.

“When any law is being developed, the existing mechanism when citizens take part through public councils is not enough,” she said, emphasizing that all citizens, despite their status, and place of residence, must have equal access to a voice in lawmaking.

Public control should become commonplace starting from decisions on the budget to developing zero tolerance for corruption, but to do so, the state must create the correct conditions.

“Civil society should be able, in an informal way, to interact with state authorities as intermediaries between the population and the state,” she added. “In the distribution of budget funds even at the level of maslikhat (local representative body), the public sector should take part. They should know where this money would go and what is the eventual coefficient of performance. Only then will the trust of citizens in the state increase as well as people’s interest to listen, demand and implement public control.”

“When I decided to run for the presidential office, I wanted to set an example that it can be possible [for women]. I have not faced any obstacles in my registration as a candidate. But after the registration by the Central Election Commission and when traveling in the regions, there were statements on social media that women cannot rule a country. There is also a stigma among people that women are not capable of doing it,” she said.

During her meeting with the human rights activists in Kostanai, Tursynbekova also raised the problem of women’s underrepresentation in senior political positions.

“Women make up the majority of the population of the country, but they are extremely underrepresented. The ceiling for women in Kazakhstan is not glass, it is concrete. It’s deaf and impenetrable,” she said. “We do not have a single female akim of a region [governor] or a city [mayor] of national significance. There are only two female ministers. And they are only in charge of ‘traditionally’ women’s spheres – health care and social security. The number of women in parliament does not reach even one-third”.

Instead of the current 30 percent quota for women and young people in the Parliament, parity should be on an equal footing of at least 50 percent, according to her.

Along with the other candidates, Tursynbekova will take part in televised debates scheduled for Nov. 11.