By Aibarshyn Akhmetkali in Central Asia, Kazakhstan Region Profiles: A Deep Dive Into the Heart of Central Asia on 19 November 2022

ASTANA – From the fourth largest lake in the world to the youngest desert on earth the new documentary on the Aral Sea named “Mission: Find Aral” will take the viewers on a journey exploring the past, the struggles of the present, and the yearning for a brighter future of the Aral Sea. The Astana Times interviewed two directors of the documentary Saxon Bosworth and Nicolas Bergounioux on their challenging but exciting journey of shooting the documentary during the pandemic, as well as their expectations and hopes as they go through the late post-production stages. 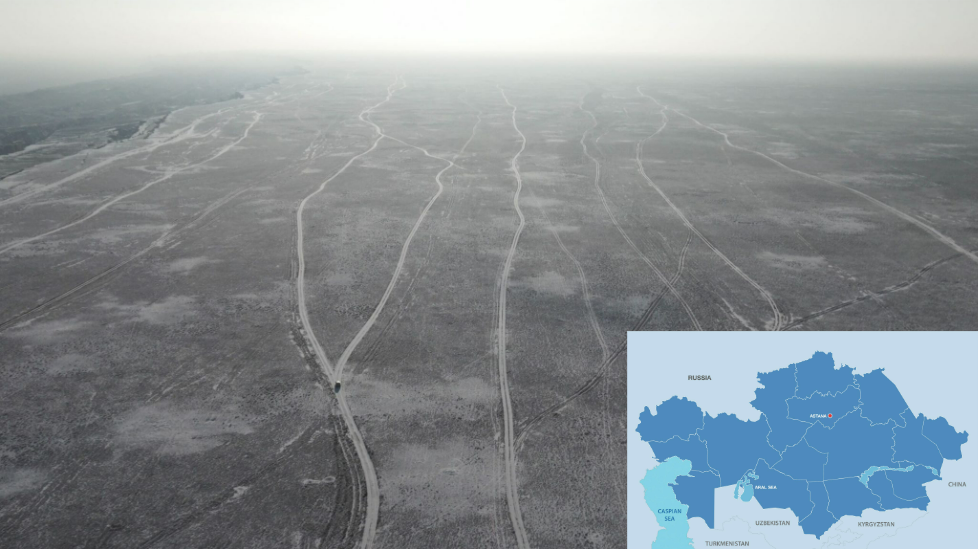 In the heart of winter, a veteran driver carefully navigates the mighty Ustyurt plateau that runs alongside the South Aral Sea. He avoids making a costly mistake using only his memory and the distant specks of gas extraction towers to find his way back to the city of Muynak. Photo credit: Saxon Bosworth, Instagram @saxonbosworth.

A three-part documentary follows the people of the Karakalpakstan Region in Uzbekistan. The film’s centerpiece is three people – a former sailor, a young man who grew up locally whilst the Aral Sea was disappearing, and a man who has dedicated his life to protecting the Aral Sea, and now the Amudarya River. The story attempts to explore the lives beyond the numbers – the memories of proud people living life on the banks of what was once a vast sea and their hopes for the future.

Sometimes large environmental disasters occur so fast, one cannot comprehend the pace and extent of it. This happened with the Aral Sea which lost over 90 percent of its water in 50 years as a result of the Soviet irrigation projects launched in the 1960s. The Aral Sea basin once spread wide between Kazakhstan to the north and Uzbekistan to the south. 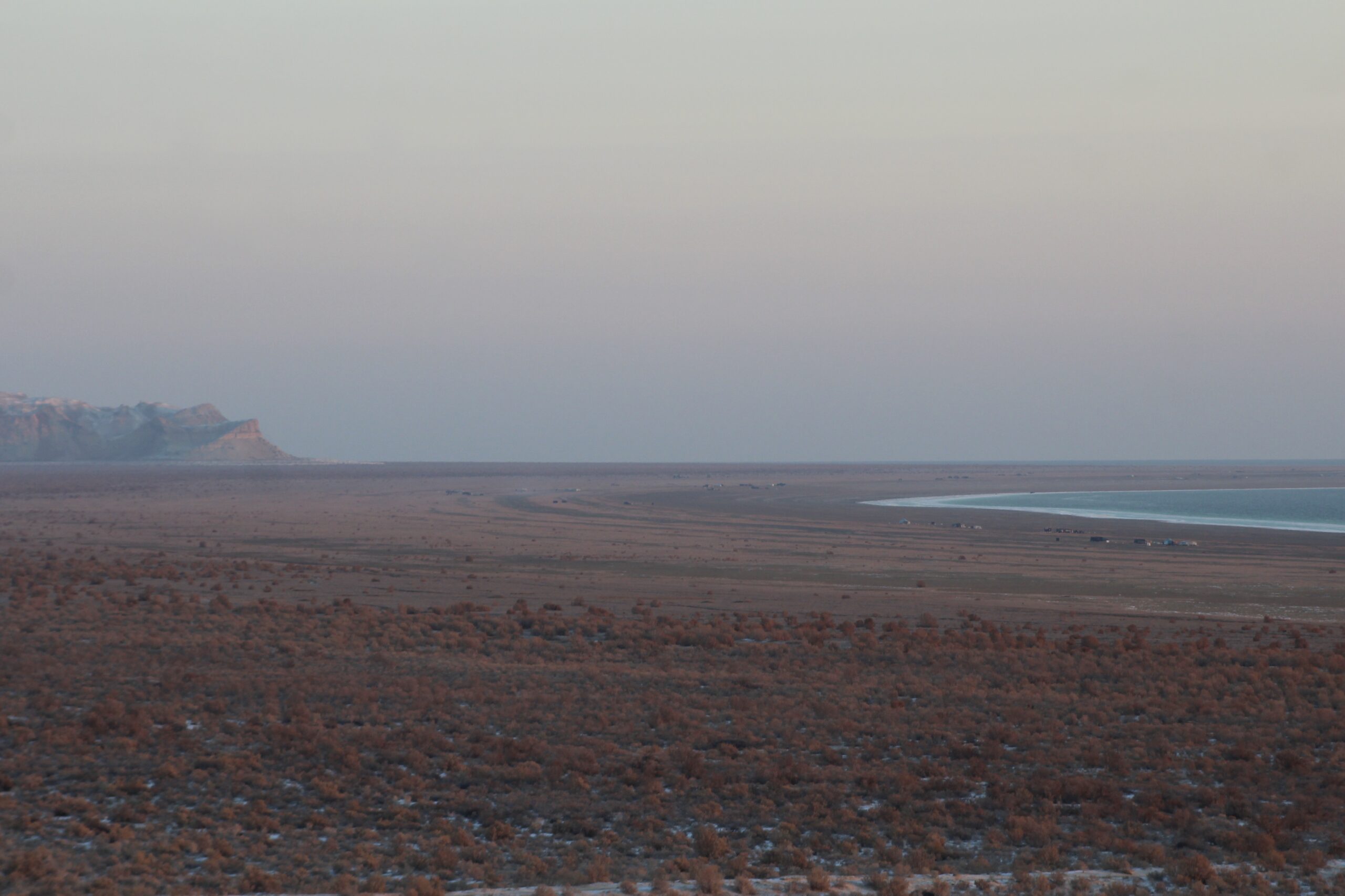 The Ustyurt plateau meets the South Aral Sea. The yurts setup on the shoreline are that of harvesters of a microscopic brine shrimp, which have provided the local people with industry following the loss of fish. Photo credit: Saxon Bosworth.

The drying out sea led to a chain of environmental consequences such as the loss of flora and fauna, desertification, and the spread of seabed-produced dust storms, not to mention the economic consequences for the local people whose livelihood depended on fishing.

Bosworth first discovered the story of the Aral Sea which was named by the former United Nations (UN) Secretary-General Ban Ki-moon as “one of the planet’s worst environmental disasters” in 2020 and shared his idea with Bergounioux. The fact that the Aral Sea story has not been given enough focus compelled the filmmakers to immediately book a flight to Uzbekistan and live in Central Asia researching and filming for the following 10 months. 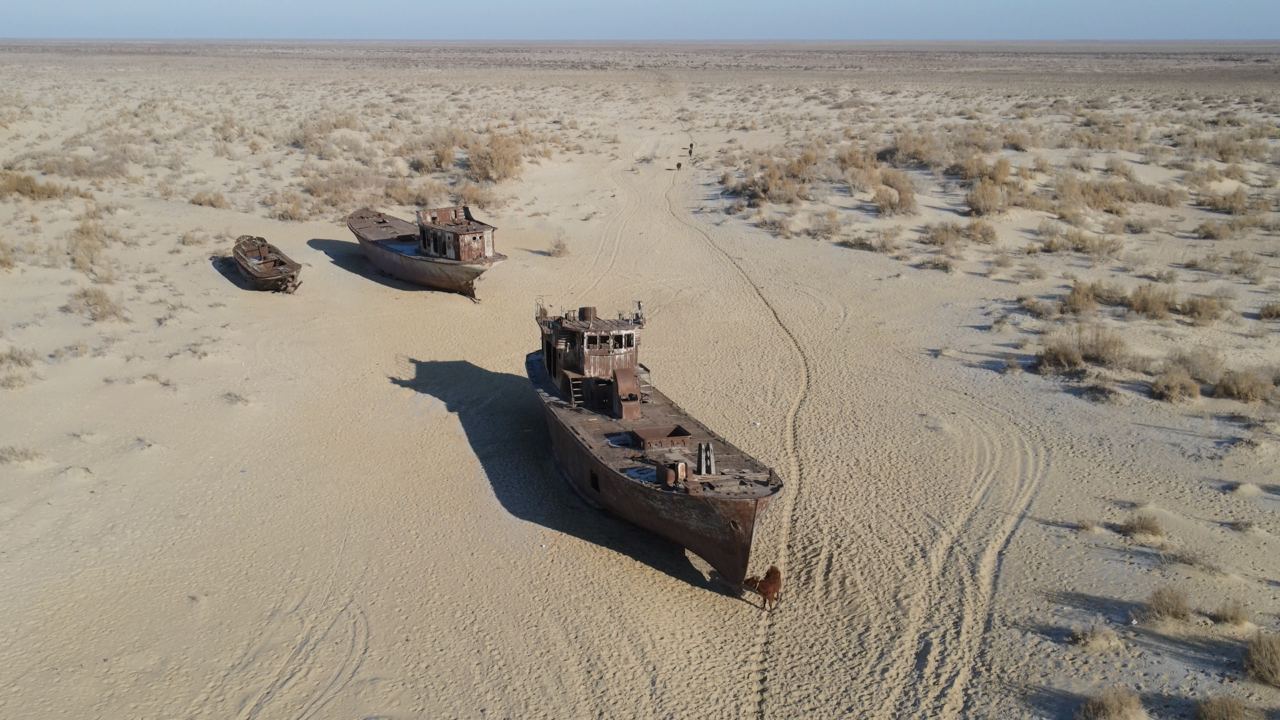 The cows of Muynak return after a day out finding pasture in the Aralkum desert. One pauses to inspect a vessel of the “ship graveyard” as it autonomously makes its way back to its owner’s house, as it does every day. Photo credit: Saxon Bosworth.

A number of other Aral Sea documentaries and short films have surfaced over the years, but they mostly focused on the tragedy and nothing yet has brought attention to what was happening now, said the directors. “We could not find many answers and decided to move to Uzbekistan to search them out ourselves.”

One of the main findings from the documentary was what the authors refer to as “one sea – two tales.” “The configuration in Uzbekistan and Kazakhstan is very different,” said the directors. “The north part [Kazakhstan’s side] still receives a consequential amount of water from the Syrdarya River, with the dam holding water from flowing into the Aralkum desert, and down to the southern, Uzbek bodies of water. This water level increase has brought fish, and subsequently some fishing industry back.”

An ambitious project known as Regulation of the Syrdarya River and Preservation of the Northern Aral resulted in the restoration and construction of hydro facilities, including Kokaral Dam which was built in 2005 with the support of the World Bank and Kazakh government in a bid to fill the waters of the northern part of the sea, also known as Small Aral. 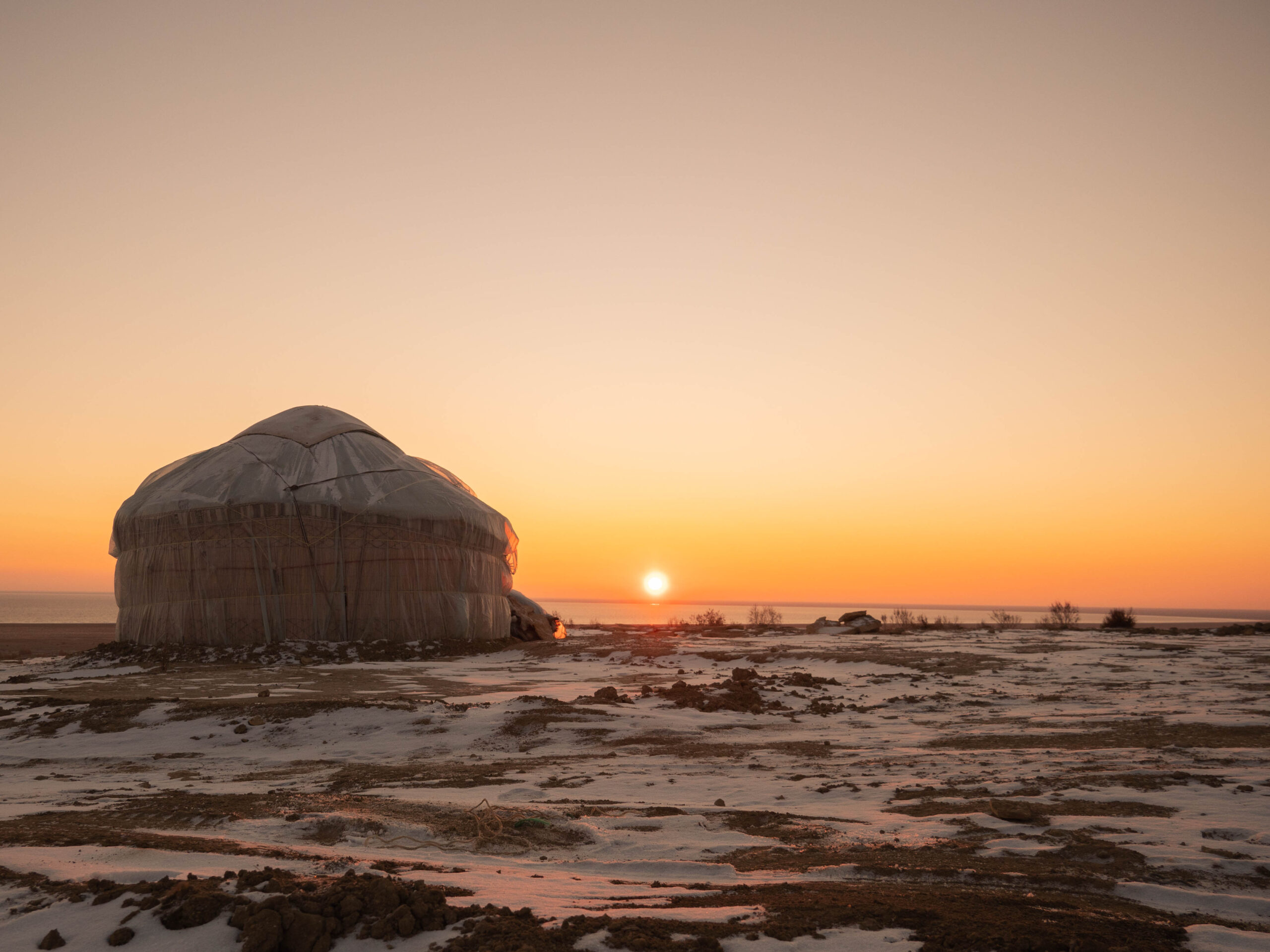 The situation is quite different on the Uzbek side of the sea. “In Uzbekistan, several fragmented bodies of water remain, which are largely cut off from the Amudarya River, and thus continue to lose water and increase salinity levels year on year, until they will seemingly be lost entirely,” said the directors.

As the slogan used by the UN Multi-Partner Trust Fund Office reads, “the sea is gone but the people are not.” The focus of developments and innovation are now centered around living with this environment and imagining the future, according to the directors.

“The main expectations we had were coming from the information we found online. Some of which discussed a ‘rebirth’ of the Aral Sea, which we later discovered was frequently misrepresenting the situation, as this story is of the Kazakh North Aral. On the Uzbek side, there were descriptions of the former port town, Muynak, as a deserted, rusted ghost town – with images of the infamous ship graveyard center stage,” said the directors. 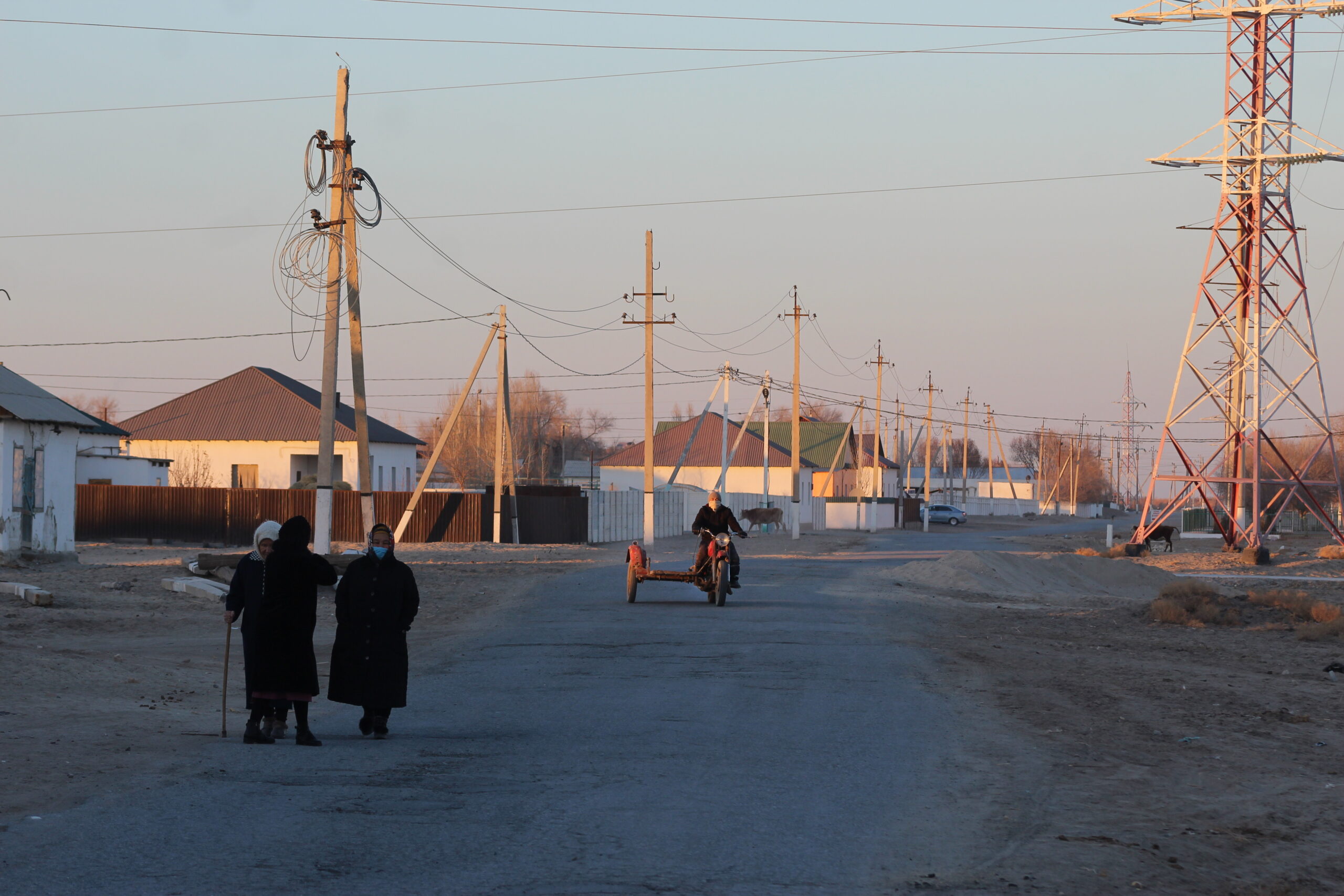 Muynak residents go about their business as sunsets and their autonomous cows stroll back into town from their daily pasturing site some kilometres away. Photo credit: Saxon Bosworth.

Nonetheless, Muynak seems to be hard at work, building and fixing, even without the access to the sea and extensive fishing resources it used to provide. “Muynak is far from being deserted,” said the directors. “The town is expanding with many buildings under construction, the development of new schools, and various tourism investments.”

Through creativity and story-telling, Bosworth and Bergounioux will explore their findings that say collaboration is key in battling water management and desertification issues in the Aral Sea basin and around the world.

They believe the answer is for the international community to work together. “To restore the ecosystem and secure the livelihood of local people, transboundary collaboration is essential, and our research demonstrates it should be further empowered, not only between Uzbekistan and Kazakhstan but the whole of Central Asia,” they said.

According to them, several projects are implemented in the north and south of the Aral Sea, and it would benefit the whole region to strengthen their coordination. “Our research has suggested that going further with data sharing, joint action, co-creating, and co-managing projects are some possibilities that might enhance development in the Aral Sea region.”

“We believe that raising awareness is not enough to empower action. We are passionate about realistic optimism, and that it can be more effective than fear-mongering. We aim to do this by shining the light on positive projects and inspiring people that better futures are attainable – and furthermore already being experimented and worked towards, tirelessly,” said the directors.

Such observations have made “Mission: Find Aral” a piece to watch when it is available.