KYZYL ORDA REGION – The ambitious project, Regulation of the Syr Darya River and Preservation of the Northern Aral (known as RRSSAM), initiated by President Nursultan Nazarbayev, has brought hope for a more prosperous tomorrow to residents of the Aral Sea region. This year, Kazakhstan will launch the second phase of this project, which will recover the Kazakh part of the Aral Sea and create conditions for socio-economic development in the region. 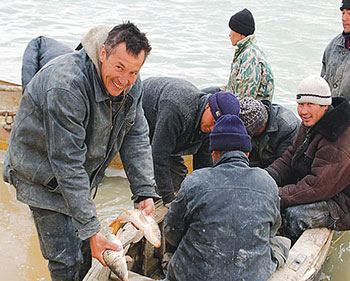 In the early 2000s, Kazakhstan received support from the World Bank for the unique project in the form of a loan of 86 million dollars. Within the framework of the loan, a number of hydro facilities were built and reconstructed on the Syr Darya River, including the fortification of existing dams. All these almost doubled the winter capacity of the riverbed (reaching throughput capacity of 700 cubic meters of water per second) and saved the villages and the regional centre from catastrophic flooding.

The project also provided for the rapid filling of the so called Small Aral Sea, and the Kokaral Dam built in 2005 with a powerful hydraulic facility, which completely separated the northern part of the sea from the main Aral Sea.

Contrary to specialists’ predictions that the filling of the Small Aral would take about five to six years, the water level in the reservoir reached its design elevation of 42 meters (on the Baltic system) in only one year. The sea recovered 870 square kilometers of its former waters, increasing its aquatic area up to 3.3 million square kilometers, and significantly reduced the harmful mixtures of salt and dust from the naked bottom that were being carried thousands of miles by the wind. The volume of water then increased by 11.5 billion cubic meters, up to 27 billion.

This significant inflow of fresh water reduced the sea’s mineralization. If previously only fish species, such as plaice brought from the Azov Sea, could adapt and survive in the conditions that existed, now traditional freshwater inhabitants including valuable species like carp, catfish and pike have returned to the Aral and the sea’s fish resources have multiplied. Moreover, if in 2005, the science-based limit for the production of commercial fish in the Small Aral was determined in the amount over 600 tons (mostly plaice), in the past year it was more than four thousand tons.

The construction of the Small Aral Sea improved the wellbeing of hundreds of Aral families, allowing fishermen to remain engaged in the traditional business. Fish processing productions began to appear and develop in the region.

Atamekenrybprom LLP, the largest plant in the country, with modern Japanese and South Korean equipment and a production capacity of 6,000 tons, was built in Aralsk as part of the programme of industrial-innovative development.

Today, the company has been certified and assigned a European Article Number, which confirms the high quality of fish in the Aral Sea and gives the company the right to supply products to the countries of the European Union. Many additional production facilities have been opened, including directly on the manmade coast of the Small Aral – Kokaral Dam.

Another benefit of the ambitious project is the improvement of the climate: rain showers, which are frequent here in May and June, revive pastures and allow villagers to be engaged in animal husbandry.

Migration statistics are no less eloquent. According to the Aral District City Hall, in recent years more than five thousand people have returned to Aralsk City and the surrounding area and the birth rate has increased notably. Unemployment has also been markedly reduced and the region is among the leaders in the construction of social facilities and individual houses.

Of course, the continuation of this ambitious project was met with enthusiasm by local residents. They took an active part in a number of public hearings, putting forward proposals for the developers of the feasibility study of the second phase, among which are the Association of Companies Arcadis Euroconsult (Netherlands), DHI Water & Environment (Netherlands), Jacobs-Babtie (United Kingdom) and the Kazgiprovodkhoz Institute (Kazakhstan).

Last year the project was divided into two stages in order to accelerate its implementation. This year, plans include restoring the gateway controller of the Kyzylorda waterworks on the left bank, building protective dams in the Kazaly and Karmakshy districts, building a road bridge over the river near Berlik Village in the Kazaly district, improving the Syr Darya bed in the Kogansha and Turumbet districts, restoring the Kamyshlybash and Akshataus lake systems and expanding the nursery ponds of the Tastak-Kamyshlybash hatchery. The total cost of the work is about KZT 22.2 billion, 85 percent of which will be provided as a loan from the World Bank again. The rest of the funds will be allocated from the national budget.

Experts and locals hope that in the near future, Aralsk City, with a population of more than 40,000 people, will return to its status as a successful resort town and a paradise for tourists.