The Story of One Tree: How 130-Year-Old Poplars Keeps Capital’s History Alive Through the Centuries

By Saniya Bulatkulova in Astana, Tourism on 30 October 2022

ASTANA  – The Old Poplar is one of the most valuable relics of Astana, seeing as the tree was planted in the capital’s Central Park 130 years ago. 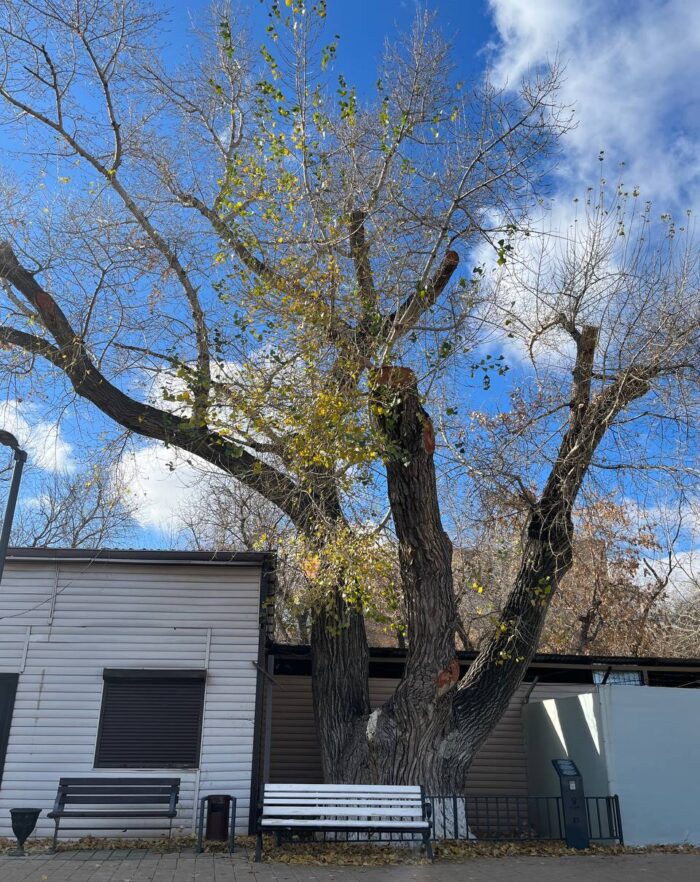 According to various sources, the black poplar was planted in the late 19th century during the laying of the Zaishim Park by the efforts of local entrepreneurs and intellectuals. The city carried the name of Akmolinsk in those times and was the center of the crossing between caravan tracks.

During its lifetime, the tree has not only gained popularity among the local citizens but has also acquired some legends built around it. One of them says that if a person hugs a tree, his wishes will come true. 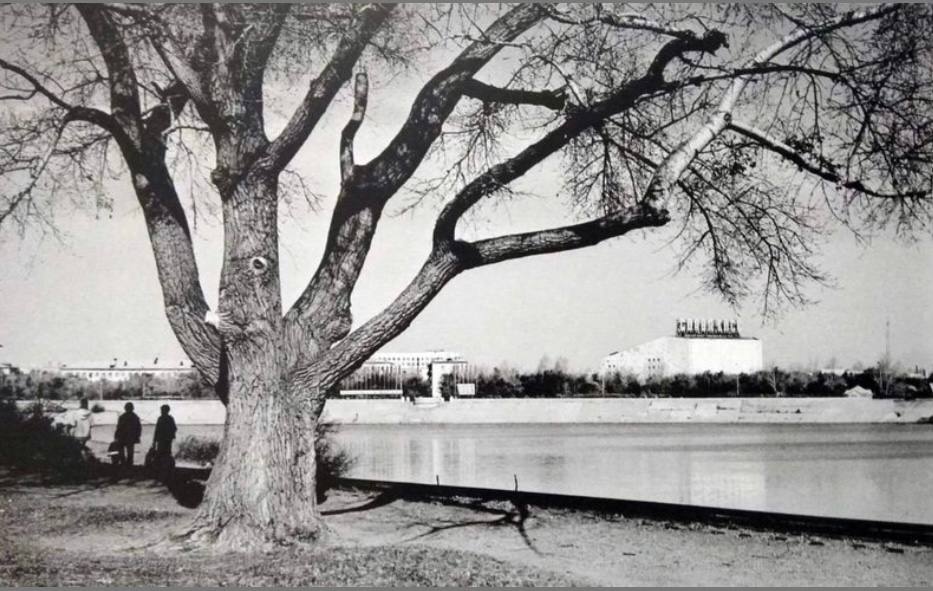 In 2019, Temirtas Iskakov, an architect and the Fading.TSE. project’s creator, launched the “Branches of Memory” project to preserve the oldest tree in the capital. He gathered photos and memories of city dwellers associated with the poplar to share them on the tree’s Instagram account.

Among the 36 photographs in the digital photo album, the oldest photo dates from 1958, and the youngest  – from 2015.

Here are some of the photos and stories, which were published in the album: 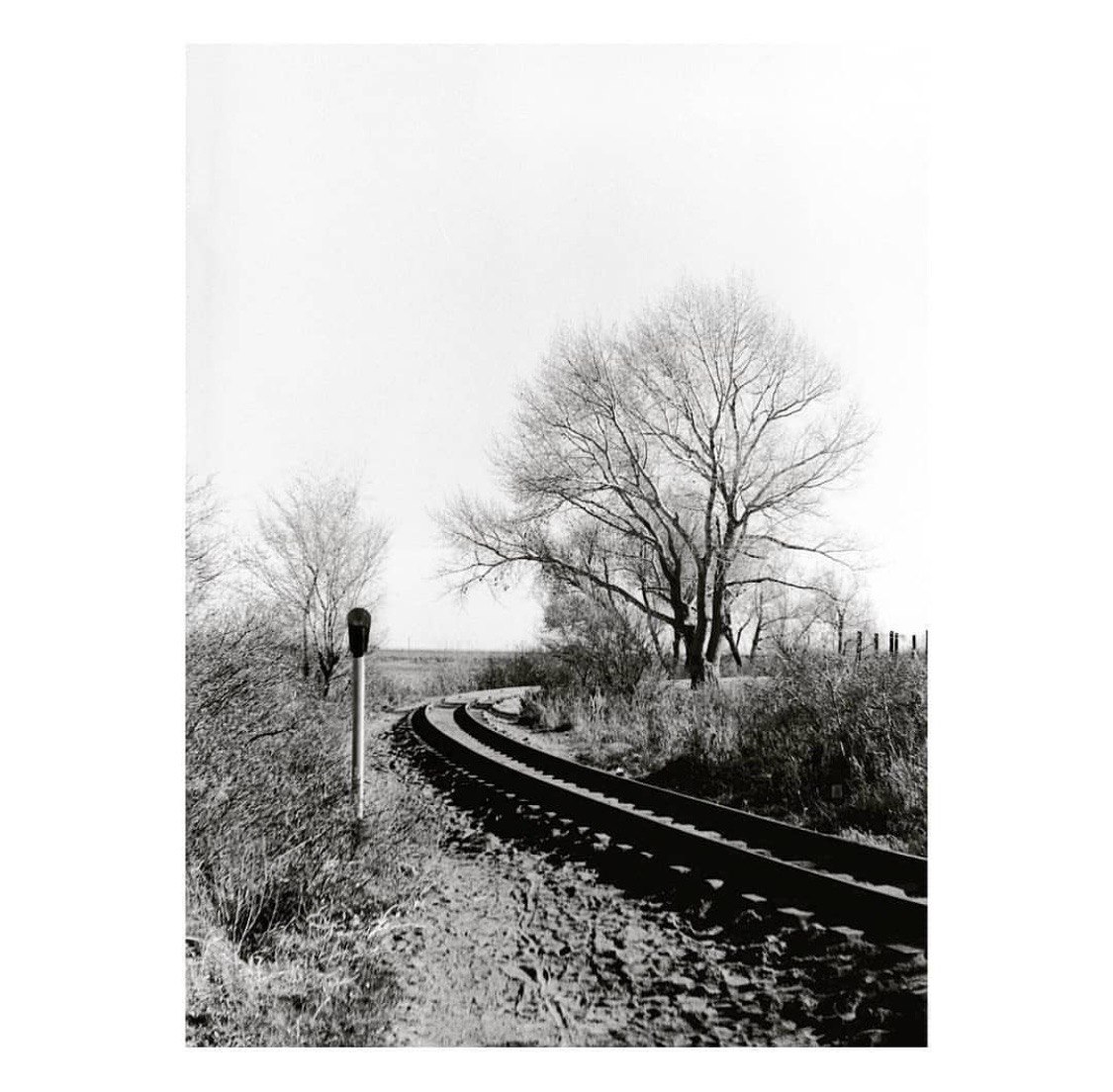 The photo was made in 1958. Photo credit: negative scan by A. I. Kolendovich from the archive of Alexander Sukhotsky.

“Children’s railroad in the city park. Ishim River is on the left behind the frame. The most famous tree in the park is on the right. I studied in boarding school and worked on the children’s railway in the summer of 1959. Then, lilies of the valley bloomed in “Railroad Workers” park and the park looked well-groomed,” says Angelina Ryabinkina. 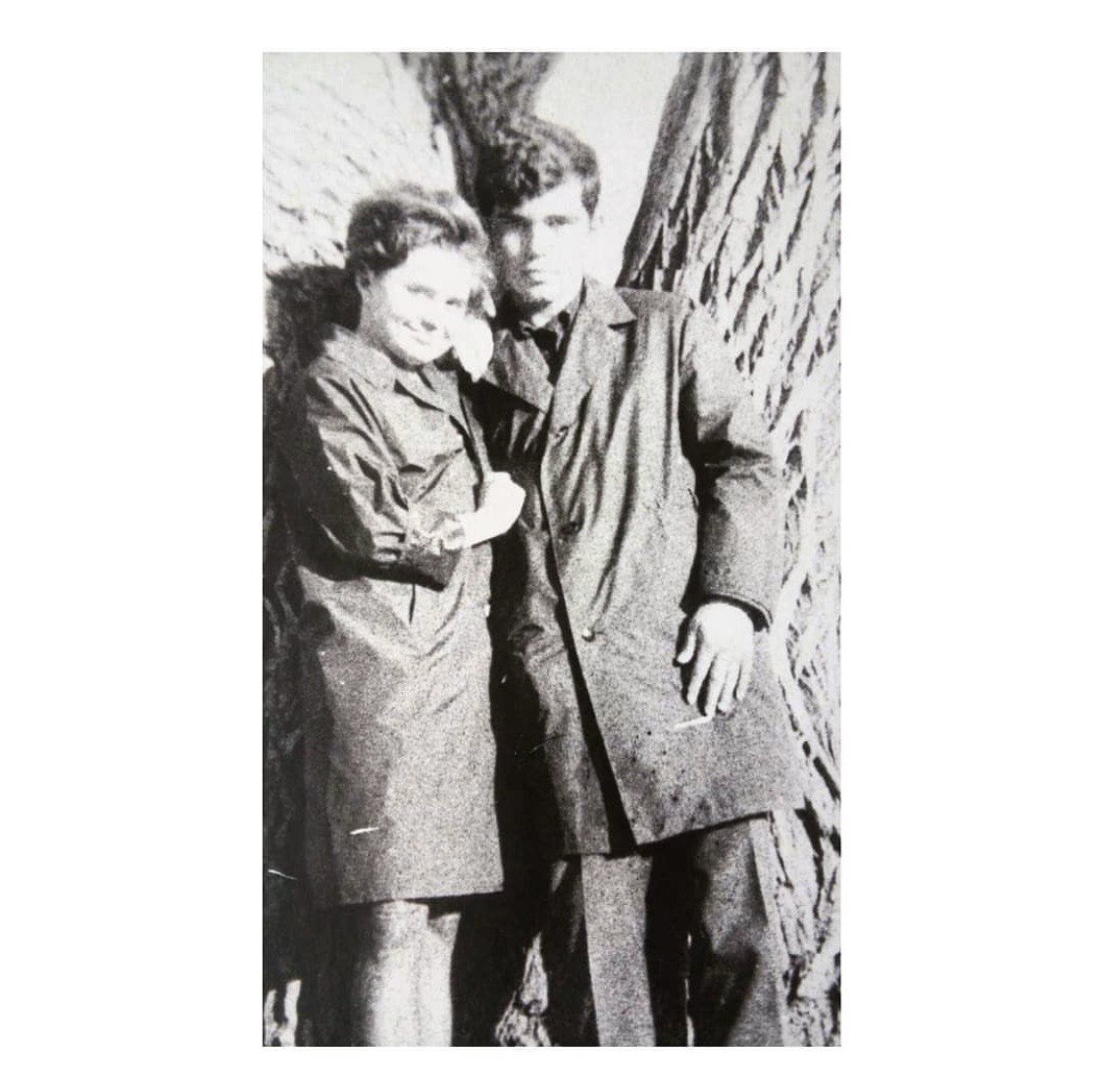 “When we were young, in 1973, students said that this tree had an energy of eternity and they made a wish. Well, everyone thought only about love at that time, of course. We have been together with my husband for almost forever – 42 years: four children, eight grandchildren and a great-grandson. And all of us are the natives of lovely Astana. My husband and I are aborigines, Akmola citizens,” says Klavdiya Selezneva. 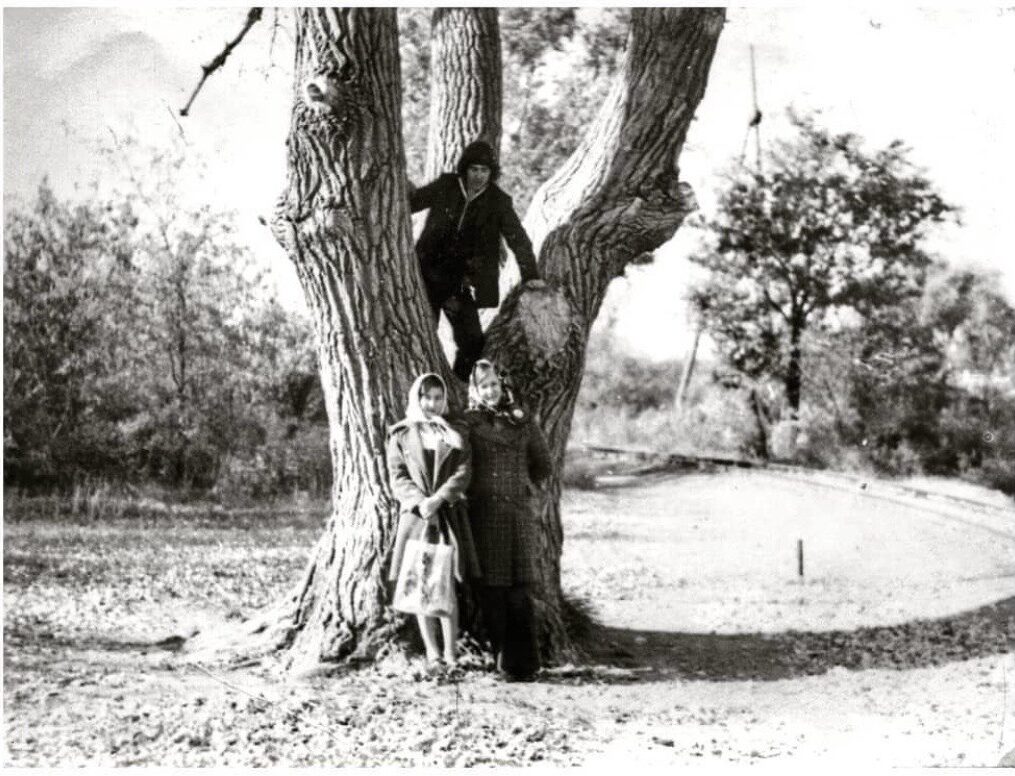 “Me and my neighbors – relatives of my friend, Raya and Aisha Skripnikovs,  – are on the photo. Memories about this tree are special. For some reasons, many meetings, including those ones in the park, were always set up near the poplar on Soldier’s Beach. The opening of the swimming season and all summer activities, including graduation party, summer gatherings after visiting the dance floor in the park and much, much more events were associated with this already historic place,” says Dmitry Yakovchenko. 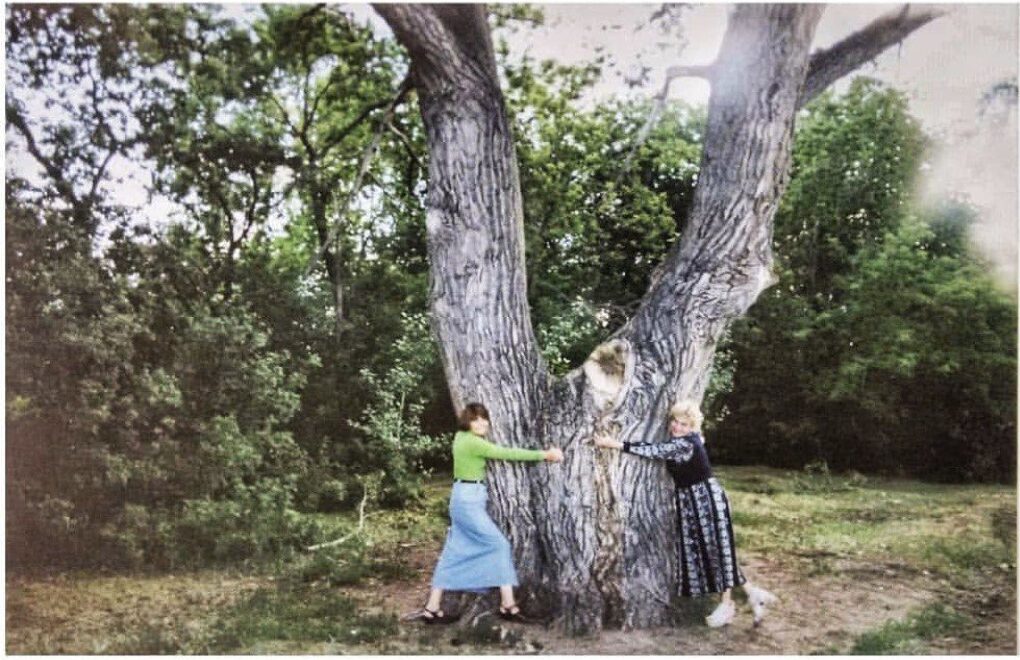 “It is me in a denim skirt and green T-shirt with my classmate Elena Grishan (Zhdanskina) on the photo. Elena was a guest at my house that day. We were walking around the park and decided to take a photo near this famous tree. We wanted to capture its power and demonstrate that both of us could not embrace it. And was not in vain. This tree is now unfortunately fenceв. And nobody knows what is beyond the fence…,” says Olda Suvorova. 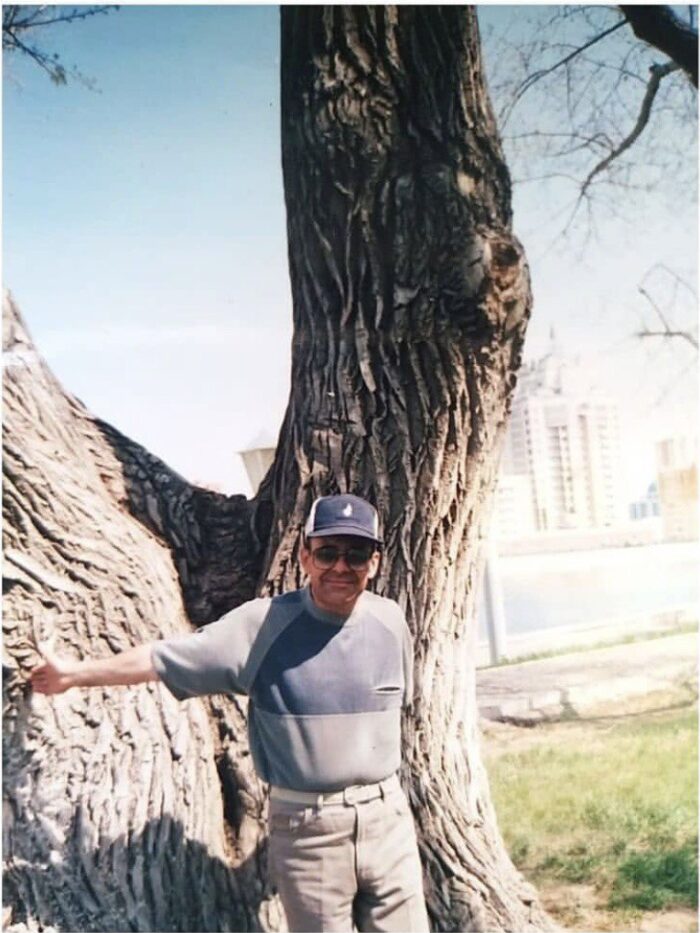 “The famous tree of our hometown. My childhood, youth, and adulthood passed under this tree. We often laid and sunbathed under the poplar. We climbed it and built a birdhouse. We made those birdhouses ourselves, it was trendy to hang birdhouses in the spring. We were fearless and sometimes climbed to the top,” says Anatoliy Vavakin.

At present, the poplar has not been included in the state list of historical and cultural monuments of local importance.