ASTANA – Chairman of the Amanat party Yerlan Koshanov announced the decision to create the people’s coalition to support President Kassym-Jomart Tokayev at the upcoming presidential elections at the extraordinary congress of the party on Oct. 6 in Astana, reported Kazinform. 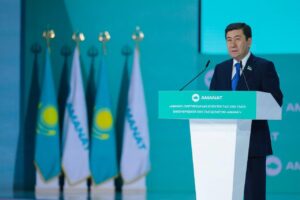 The Ak Zhol Democratic Party also put forward their support for the candidacy of Tokayev.