Kazakhstan, South Korea Have Come a Long Way Together, But New Future Stands Ahead, Says Korean Ambassador to Kazakhstan

ASTANA – South Korea and Kazakhstan have gone through an unchartered path together, but now, 30 years since the establishment of diplomatic relations, the bilateral ties are at a mature age, said South Korean Ambassador to Kazakhstan Koo Hong-seok in an interview with The Astana Times.

Ambassador Koo Hong-seok has been in Kazakhstan since 2020. Photo credit: South Korean Embassy to Kazakhstan

“The past 30 years have been a period when our relations have matured,  laying a solid foundation and progressively forming the foundation for our mutual understanding,” said Koo Hong-seok, noting the two countries’ ties stem from the Declaration of Basic Principles of Interrelations and Cooperation between Korea and Kazakhstan signed on May 16, 1995.

The strategic partnership, which the two nations agreed to in 2009, received a significant push, following President Kassym-Jomart Tokayev’s state visit to Korea last August, the first foreign leader to visit South Korea since the pandemic began.

“I believe that this continuous development of bilateral relations has been possible due to the close relationship between the leaders of the two countries, as well as cooperation based on complementary economies and active mutual exchange between our peoples, who have similar cultural and emotional features,” said the Ambassador. 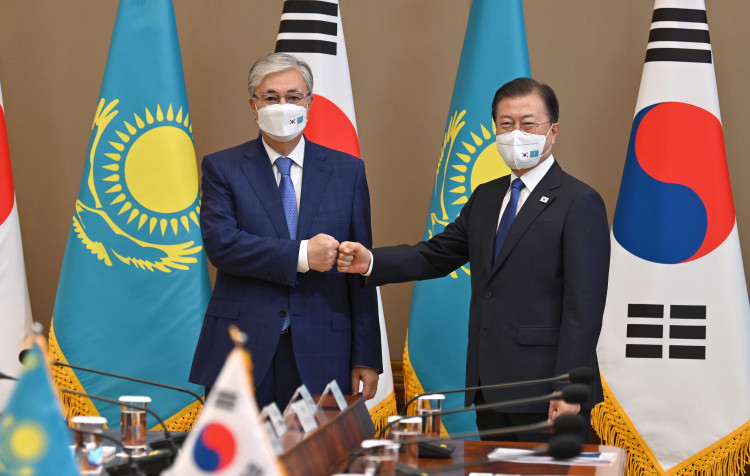 Presidents Tokayev and Moon Jae-in during their meeting in Cheongwadae, the presidential palace in Seoul. Photo credit: Akorda press service

Kazakhstan and South Korea share a lot in common

The two countries are similar in many ways, according to the Ambassador, including common cultural background and commitment to peace.

“For example, language and customs. Kazakh and Korean belong to the Altai family of languages, and the grammatical order of words is the same. It is therefore easier and faster for our people to learn our languages. Besides, Kazakhs and Koreans are both emotionally similar, they have a culture of welcomeness and hospitality, and attach great importance to etiquette,” the Ambassador explained. 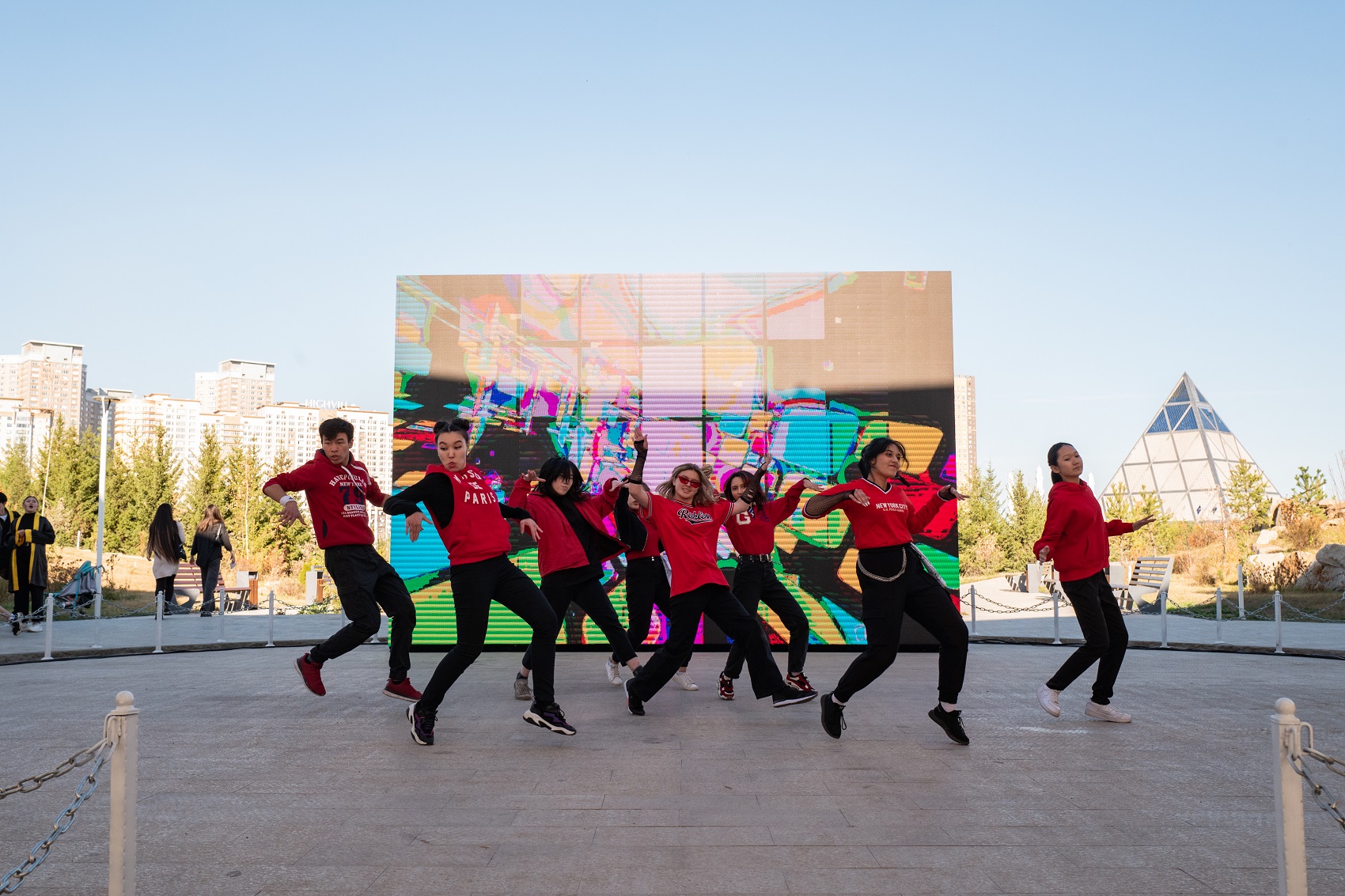 He emphasized the peace-loving nature of the two countries, which have always advocated for peace and diplomatic solutions.

“As a leading country in the anti-nuclear movement and a responsible member of the international community, Kazakhstan’s experience in denuclearization shows that Kazakhstan continues to contribute as a staunch supporter of Korea in denuclearization and peace-making on the Korean Peninsula,” said Koo Hong-seok.

He sees growing opportunities for cooperation in regional and international formats amid global geopolitical and geoeconomic uncertainties. 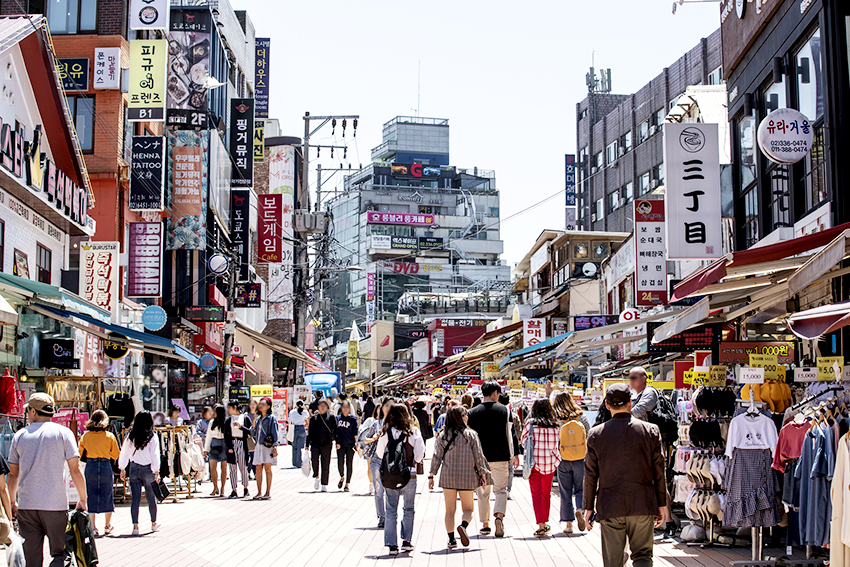 South Korea is also one of the most popular destinations among Kazakh citizens for travel, study, and medical purposes. Photo credit: visitkorea.or.kr

“Korea can contribute as one of the major countries in promoting Kazakhstan’s diversified foreign policy. Korea will continue to contribute as an important partner and to further expand and deepen Kazakhstan’s foreign relations,” he said.

He spoke about the challenging path that Korea had to overcome to become the country it is today, demonstrating “political, economic, and other social successes in a short time.”

“I think Korea’s experience has a lot of useful aspects that Kazakhstan can take into consideration when building the New Kazakhstan,” he explained. “Just as no one could imagine today’s Korea 50 years ago, I sincerely believe that Kazakhstan’s future will be as bright as it is hard to imagine it 30 years from now.”

People-to-people contacts and cultural exchanges are also growing, with more Kazakh citizens choosing Korea as a destination for travel and education.

The historical significance of bilateral ties

The Ambassador emphasized the strong Korean diaspora in Kazakhstan, which serves as a “bridge” in the bilateral ties.

“This year marks the 85th anniversary of the resettlement of Koreans in Kazakhstan. Koreans overcame the painful trials of being forcibly deported from their homes in 1937 and settled safely in Kazakhstan. They work actively in various spheres of life in Kazakhstan’s society and contribute greatly to Kazakhstan’s economic and social development,” he said.

An important milestone in bilateral relations was the return of the remains of General Hong Beom-do, a historic Korean independence fighter to Korea in August 2021, on the occasion of of Tokayev’s state visit. Hong died in 1943 at the age of 75 and his remains had been buried in Kyzylorda.

Prospects for trade and investments

According to the data from the Korean side, the total trade turnover between January and August reached US$4.2 billion, surpassing the record $4.2 billion in 2019.

“Kazakhstan is the largest trade and investment partner of Korea among the five Central Asian countries. In other words, we can say that Kazakhstan is a key country and an important hub in Central Asia in terms of business,” said the Ambassador.

He cited the data indicating that Kazakhstan accounted for 73.6 percent ($3.26 billion) of total Central Asian trade, with exports accounting for 35.4 percent and imports 99.4 percent.

“Looking at the types of products, Korea exports consumer goods such as cars and cell phones to Kazakhstan while importing raw and intermediate materials such as crude oil and uranium from Kazakhstan,” said the Ambassador, highlighting yet untapped potential for cooperation in nuclear and green energy, in rare minerals such as uranium and rare earth materials.

On the investment side, indicators are equally good. Korea has invested $4.2 billion since 1992.

“Direct investments in Kazakhstan, however, have declined slightly this year due to the impact of COVID-19, the January unrest, as well as the effect of Western sanctions against Russia and logistical problems caused by the Ukrainian crisis,” he said.

He hopes the opening of the Consulate General of Kazakhstan this year in Busan can make an enormous contribution to expanding the bilateral trade and investment cooperation, as well. He stressed, Busan, the second largest trade-shipment port in the world, with abundant experience in hosting many large-scale international events, is actively seeking to host the 2030 World Expo.

What are some of the major projects?

“Among individual projects, Korea’s Daewoo Shipbuilding & Marine Engineering won a tender from Tengizchevroil, Kazakhstan’s largest oil field operator. The project was launched in 2014 and completed in 2020, with a contract value of $2.7 billion,” he said.

Korea’s SK Ecoplant is also involved in the construction of the Big Almaty Ring Road.

the largest road construction infrastructure project in Kazakhstan and Central Asia implemented in a public-private partnership mechanism. The Korean company is part of a concessionaire that manages the construction of a 66-kilometer six-lane ring road that is expected to divert a significant part of transit traffic flows away from the streets of Almaty and improve connectivity.

Among other projects, Korea’s major corporations Hyundai and Kia have their own production and assembly lines in Almaty and Kostanai, respectively, transferring Korean car production technologies to local partners and employees. In July, the construction of a Kia commercial vehicle assembly plant was completed in Astana.

“One of the most potentially large-scale areas of cooperation in the future could be in the electric power sector. I know that the government of Kazakhstan is actively promoting the construction of a large-scale gas-fired combined-cycle power plant, as well as a nuclear power plant, to achieve carbon neutrality by 2060,” said the envoy. 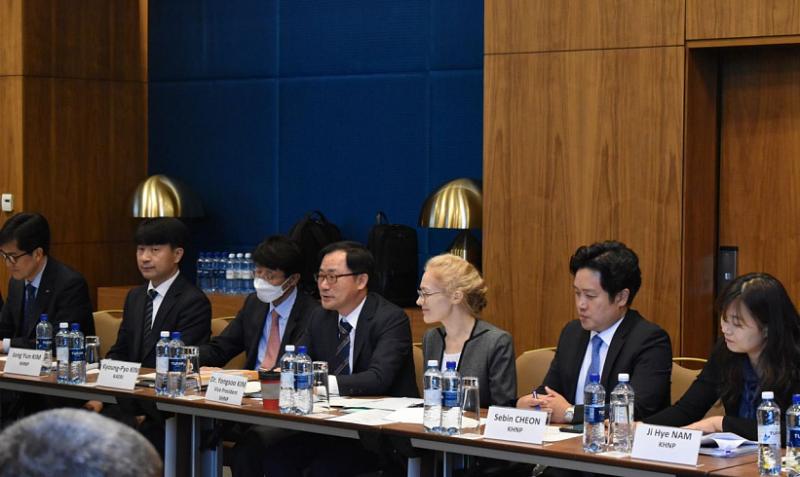 In September, a delegation from Korea arrived in Astana to share the experience in developing nuclear power and the construction of nuclear power plants. Photo credit: sknews.kz

In fact, Korea’s Hydro & Nuclear Power is one of the four potential contractors to provide their nuclear solutions to Kazakhstan, which is planning to build its first nuclear power plant. The selection, however, is yet to be made.

“We hope to make a significant contribution to the development of Kazakhstan’s nuclear power industry based on our advanced technology and safety techniques, which have been tested and confirmed by the successful construction and operation of nuclear power plants in the United Arab Emirates,” said Koo Hong-seok.

A personal reflection on Kazakhstan

Koo Hong-seok has been in Kazakhstan since 2020. When asked how he can describe his personal impressions of the country, he said Kazakhstan can be characterized by three words – unity, bridge, and diversification.

“The first word that comes to mind is unity. As a multi-ethnic and multi-confessional country, Kazakhstan attaches great importance to the unification of different nationalities and holds the Congress of Leaders of World and Traditional Religions, becoming a window for inter-religious dialogue. I watched with great excitement the seventh congress last month, which was attended by Pope Francis and all leaders of other religions, who together called upon the whole world for peace and harmony,” he said.

Kazakhstan is also a “geopolitical bridge,” according to him, and for this bridge to function properly, the various factors and actors must be properly considered and balanced. “Kazakhstan is currently working hard to achieve this, and I see Kazakhstan as having a great bright future,” he added.

“Diversification is the core of Kazakhstan’s foreign policy and the core on which it relies in difficult moments like now. Kazakhstan must continue to move in this direction in the future,” he said.