By Aibarshyn Akhmetkali in Conference on Interaction and Confidence Building Measures in Asia, International on 14 October 2022

ASTANA – The sixth Conference on Interaction and Confidence Building Measures in Asia (CICA) summit talks held in the Kazakh capital Astana on Oct. 13 concluded with the adoption of the Astana Statement that launched the process of transformation of CICA and extension of Kazakhstan’s chairpersonship for 2022-2024 with a focus on expanding supply chains gaps, promoting sustainable growth, ecology, and food security.

The sixth CICA summit concludes with the adoption of the Astana Statement and extension of Kazakhstan’s chairpersonship for 2022-2024. Photo credit: President’s press service

Eleven heads of state including presidents of Azerbaijan, Belarus (observer), Iran, Kazakhstan, Kyrgyzstan, Palestine, Russia, Tajikistan, Türkiye, and Uzbekistan, as well as the Emir of Qatar and nearly 50 delegations attended the summit, deemed one of the most significant post-pandemic foreign policy events in the country and on the continent.

The geographical scope of the conference has been broadened consistently over the years. This year the summit’s decision granted Kuwait the status of a CICA member state making it the 28th member country.

“In 1999, there were 15 member states in the conference, and now their number has reached 28. This, in fact, shows that the credibility of the forum in the eyes of the Asian countries and the world community as a whole has increased,” said President Kassym-Jomart Tokayev expressing his congratulations to Kuwait. 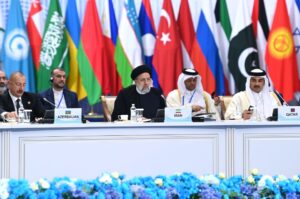 Turkmenistan joined CICA as an observer. Decisions were made to establish cooperation with the Eurasian Economic Union and the Association of Southeast Asian Nations (ASEAN), according to Tokayev.

The transformation of the conference into an organization topped the agenda of the talks between regional leaders, with many countries expressing their full support.

“I do hope that with the transformation of CICA into a regional organization, it will thrive and flourish as a precious structure and pave the way for cooperation and fight for a better status in international and regional states,” said President of Iran Ebrahim Raisi.

The Iranian leader said the focus would remain on enhancing security and political dialogue.

“We are convinced that CICA member states relying on the deeply rooted civilizational background can tweak the existing methods for the promotion of peace and security and channel it through diplomacy and interactions,” he added. 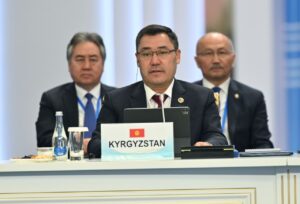 Kyrgyz President Sadyr Japarov expressed his support for Kazakhstan’s new term of chairpersonship in 2022-2024. “Kyrgyzstan wholeheartedly supports Kazakhstan’s nomination to continue the mission of chairing CICA, which will allow the implementation of plans aimed at improving the effectiveness of its activities,” said the Kyrgyz President.

Facing regional threats to stability, Kyrgyzstan firmly adheres to CICA principles and supports Kazakhstan’s efforts within the conference, he added.

“We appreciate the efforts of Kazakhstan’s chairpersonship aimed at the institutional development of CICA and welcome the launch of the transformation of the conference. Based on the basic objectives, the positive experience gained over the past 30 years, and the desire of the participating countries to cooperate more closely, the meeting should eventually transform into a full-fledged organization,” said Japarov. 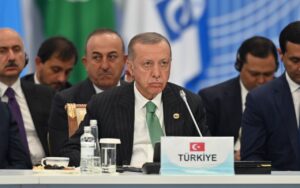 “We have been expecting the revival of the modern Silk Road that connects Asia and Europe, once again, using multiple modes, transportation corridors. That is why the Trans-Caspian International Transport Route (TITR), known as the Middle Corridor initiative, is going to be very significant. (…) In order to strengthen international connectivity we have implemented infrastructure projects worth $100 billion in the last 15 years,” he said.

Vice President of the People’s Republic of China Wang Qishan said CICA has played an active and constructive role in regional and international affairs improving dialogue between Asian countries on security and political issues. 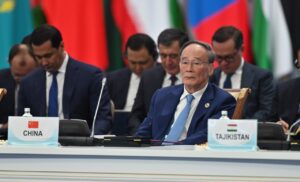 “China all along has viewed CICA’s development from a strategic and long-term perspective and supports the overall direction of upgrading CICA into an international organization,” he said.

Chief expert at the Kazakhstan Institute for Strategic Studies Adil Kaukenov noted a shortage of large and unaffiliated platforms in Asia where countries can develop joint solutions, which gives CICA an advantage.

“The great achievement of Kazakhstan’s foreign policy, which is noted by absolutely all CICA participants, is the absence of external and internal conflicts, which enables Kazakhstan to host absolutely all countries in a friendly atmosphere,” wrote Kaukenov on Facebook.

“There is no country in the world, which could officially say that Kazakhstan has an unfriendly or aggressive policy against it. On the contrary, being ‘the territory of calmness,’ Kazakhstan aspires to export its peaceful friendliness, to be a platform for finding points of contact of the most different conflicting parties and to give impetus to peace processes,” he said.