By Aida Haidar in Conference on Interaction and Confidence Building Measures in Asia, International on 13 October 2022

ASTANA – Speaking at the opening of the plenary session of the sixth CICA summit on Oct. 13 in Astana, President Kassym-Jomart Tokayev outlined five priority directions for Kazakhstan’s next two-year chairmanship at the Conference on Interaction and Confidence-Building Measures in Asia (CICA). He said the country sets ambitious goals for this mission, including the transformation of the conference into a full-fledged international organization. 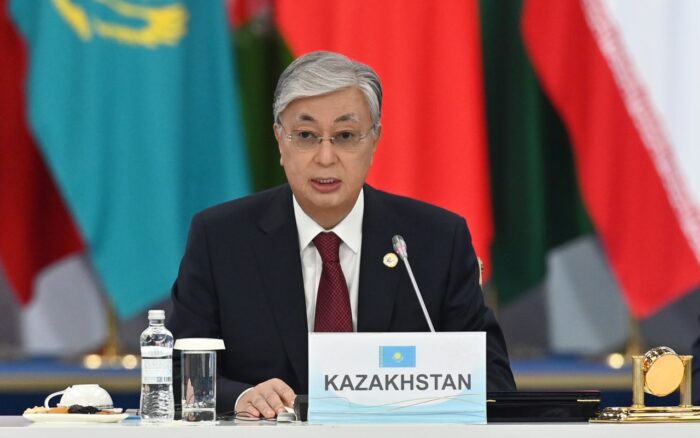 The first area that he raised is economic cooperation, noting the decision to form the CICA Council on Sustainable Interconnectivity as timely. Gaps in global supply chains are driving Asian countries to reconsider establishing effective transit and transportation corridors.

Tokayev also suggested transforming the CICA Financial Summit, which China initiated to strengthen financial cooperation among CICA member states, into a permanent platform. According to the President, this transformation will assist in economic recovery and sustainable and inclusive growth, creating ideal conditions for regional and subregional financial cooperation.

“Large financial centers are successfully operating in the CICA area, in Shanghai, Dubai, and Astana. You can fully utilize their potential to solve the identified tasks,” said Tokayev. 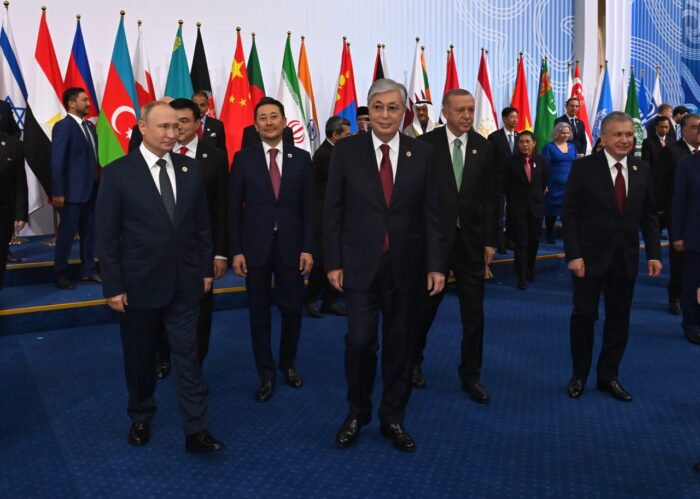 Tokayev stated that economic policies can only be considered effective if they focus on the human dimension, human resource conservation, and development. Photo credit: Akorda press service

President Tokayev also drew the attention of the meeting participants to ecological issues, the decarbonization of the continent’s economy, and climate change, which leads to natural disasters that have become “increasingly unpredictable and catastrophic.”

“In 2021, 57 million people in Asia were affected by them [natural disasters]. The potential damage to the Asian economy from such natural disasters may reach 26 percent of GDP by 2050,” said Tokayev, adding that the climate crisis has the potential to spark military confrontations and create catastrophic and uncontrolled migratory flows.

The President also addressed the recent disastrous floods in Pakistan, which resulted in a massive humanitarian crisis. He reiterated that the country is standing by Pakistan’s people and leadership through this trying moment.

According to Tokayev, significant investments are required to decarbonize the continent’s economy.

He also proposed to CICA countries to organize a high-level conference on environmental issues in Astana in 2024, similar to the COP27 (United Nations Climate Change Conference) to be held in Egypt in November, with the hope that it will lay the groundwork for the establishment of CICA Council on Cooperation in the environment.

Tokayev identified a working mechanism for ensuring food security in the CICA area as the fourth priority. According to him, despite Asia producing two-thirds of the world’s agricultural products, it remains vulnerable in this area.

The Kazakh President stressed the need for unified approaches to assessing the compliance of important products with national standards and creating green corridors between CICA member states for this category of goods.

“It seems promising to establish cooperation between the CICA and the Islamic Organization for Food Security, whose headquarters are in Astana. Given the agricultural potential of our countries, we could take measures to provide food and fertilizers to countries in need,” said Tokayev.

The President emphasized that people should be at the center of all efforts, saying economic policies can only be considered effective if they focus on the human dimension.

The President proposed convening leaders of CICA volunteer movements under the auspices of the Youth Council in 2024 in Astana, which hosted a youth conference in Astana in July.

He also spearheaded the establishment of the partnership network of leading universities of CICA member states to exchange developments in IT, nanotechnology, and renewable energy.