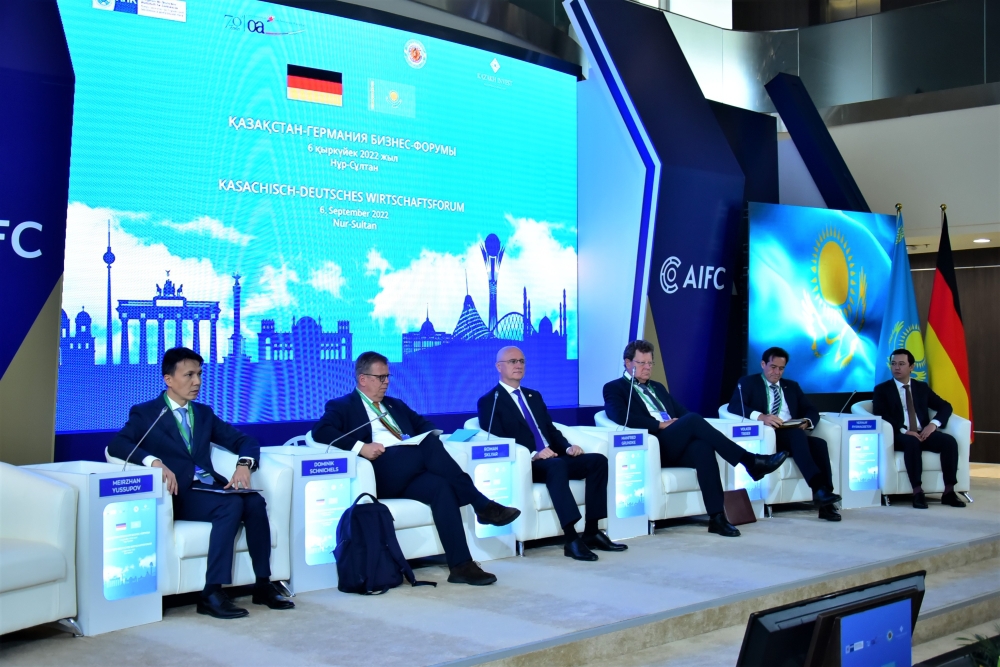 Germany is among key partners for Kazakhstan, investing nearly $5.3 billion since 2005. Nearly 90 percent of the German investments in the Kazakh economy are directed to the country’s non-resource sector. Photo credit: Kazakh Invest

The forum, organized by the Kazakh Embassy in Germany and Kazakh Invest, was attended by heads of central and local government agencies, national and quasi-state companies, representatives of industry and regional business associations, as well as heads of leading German companies, including Siemens, Deutsche Bahn, SAP, Becker Mining Systems AG, Knauf, and Wilo.

Addressing the forum participants, First Deputy Prime Minister Roman Sklyar said that Kazakhstan has a lot to offer. While Kazakhstan’s vast hydrocarbon and mineral reserves remain the backbone of the economy, he assured the investors that the government continues to make progress toward diversification into other sectors.

Speaking about the aforementioned support for investors, Sklyar outlined preferences offered to them at the Astana International Financial Centre (AIFC), including tax exemptions extending to 50 years, simplified currency exchanges, and simplified visa and labor regimes.

“A draft of a new concept of Kazakhstan’s investment policy was approved with a focus on increasing the investment attractiveness of Kazakhstan in the face of increased ESG [environmental, social, and corporate governance] requirements, global energy and technological transition. Innovations include measures to optimize and simplify tax regimes, subsidies and other incentives for investors in priority sectors of the economy,” he said.

Germany is one of the key partners of Kazakhstan, investing nearly $5.3 billion into the country since 2005. Nearly 90% of the German investments in the Kazakh economy are directed to the country’s non-resource sector.

Last year alone, trade turnover between Kazakhstan and Germany reached $2.2 billion, 6.4 percent more than in the previous year. In the first half of 2022, the two countries traded $1.2 billion in goods.

Sklyar stressed that Kazakhstan has the potential to increase exports to Germany for more than 140 commodity items worth around 1 billion euros (US$1 billion).

According to Dominik Schnichels, co-chair of the Kazakhstan-Germany intergovernmental working group, Kazakhstan and Germany have huge potential to implement joint projects across many areas. Underscoring the post-pandemic crisis and the current geopolitical situation, he sees the increased importance of cooperation in the food security, energy freedom and supply chain sectors of the economy.

“In this vein, we see that Kazakhstan has great potential in many important areas of the economy for Germany, these are both non-renewable energy sources and the development of a very relevant direction for the world – production of renewable energy sources. In addition to its location and logistical advantages, Kazakhstan also has a huge resource and human potential. We believe that the expansion of cooperation is very beneficial, both for Kazakhstan and for Germany,” said Schnichels, who met with Kazakh President Kassym-Jomart Tokayev on Sept. 6.

The German delegates showed interest in Kazakhstan’s potential to increase the supply of traditional energy resources to Germany, the production and subsequent export of green energy and stressed the importance of Kazakhstan as a trade and investment partner in Central Asia and as a transit country for the transportation of goods from Asia to Europe.

According to the data from the Kazakh Ministry of Industry and Infrastructure Development, in the first half of this year, the volume of transit cargo shipments from Germany through the territory of Kazakhstan increased by 47 percent to 2,300 tons.

During his meeting with Schnichels, Minister of Industry and Infrastructure Development of Kazakhstan Kairbek Uskenbaev noted the country’s interest in the development of close ties in the automotive industry, an economic sector in which Germany is one of the world’s leaders.

“As part of the Kazakh-German cooperation in the sphere of industry, 14 projects worth $719.4 million have been implemented creating more than 2,200 jobs. I would like to highlight a major joint project with CLAAS on the production of agricultural machinery. Today the company is working steadily and has produced at least 80 tractors this year. We are satisfied with CLASS coming to the Kazakhstan’s market and we have high hopes for further deepening of the industrial cooperation,” said the minister.

The principle of individual support and follow-up with every investor has also been introduced. The Council of Foreign Investors operates with the participation of the Head of State, an investment headquarters under the Prime Minister, and the Prime Minister now also acts as an investment ombudsman. Kazakhstan has Central Asia’s only international financial center, Astana, with an independent court and an international arbitration center based on English law. Special economic and industrial zones have been created in priority sectors of the economy in almost all regions of the country. There is a center of excellence in medical education and science. There are now many technology parks for the development of nanotechnology, entrepreneurship and the innovation economy in the country.

The First Deputy Prime Minister noted the transport framework created by Kazakhstan and its integration into global transport corridors. International transport links that connect Europe and Asia run through Kazakhstan.

“I have spoken only about a part of institutional reforms aimed at improving the investment climate and business climate in our country. We have a lot of work ahead of us, and we are ready for it, as they say, “with our sleeves rolled up,” concluded R. Sklyar.

The event was organized by the Embassy of the Republic of Kazakhstan in Germany, together with “NC “KAZAKH INVEST” JSC, with the support of the Eastern Committee of the German Economy and the Representative Office of the German Economy in Central Asia in Almaty during the visit of the German delegation to Kazakhstan, which was headed by the co-Chairman of the Kazakhstan-Germany Intergovernmental Working Group, and director of foreign economic policy of the Federal Ministry of Economy and Climate Protection of Germany, Dr. Dominik Schnichels. During the visit, the German delegation also met with Head of State Kassym-Jomart Tokayev.

The headline for the event was: “Adaptation to the New Rules of Global Business – Common Opportunities in Industry, Energy and Logistics”.