By Aibarshyn Akhmetkali in Congress of Leaders of World and Traditional Religions, International on 12 September 2022

NUR-SULTAN – Discussions at the seventh Congress of Leaders of World and Traditional Religions will range from religious education and combating extremism to strengthening the status of women and promoting peace and religious dialogue, said Maulen Ashimbayev, chairperson of the Senate and head of the Secretariat of the Congress  an upper chamber of the Kazakh Parliament, in an interview with Tengrinews news outlet. 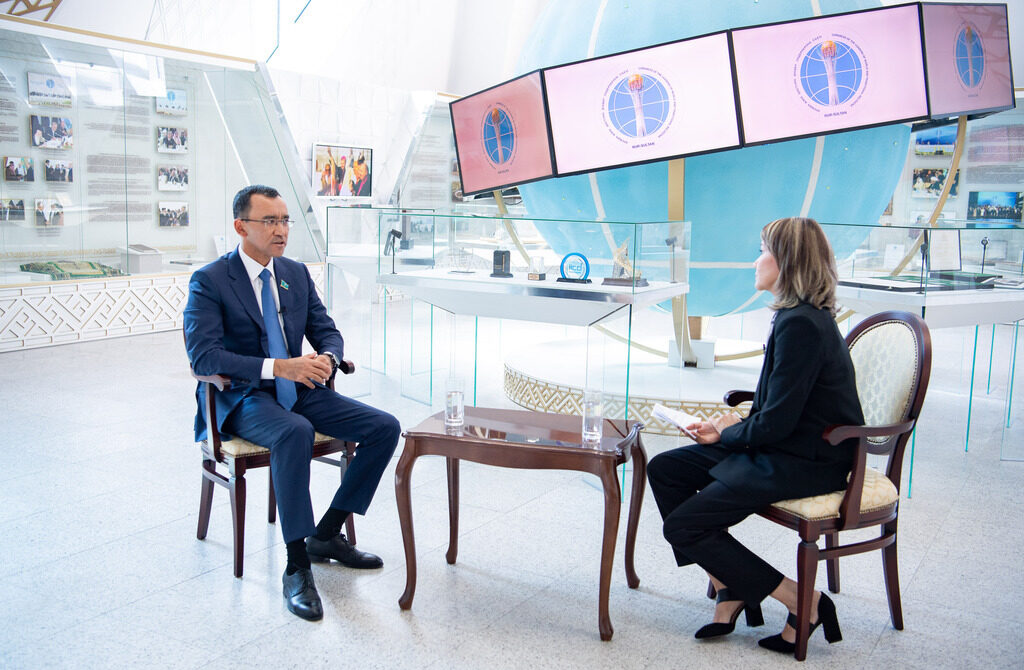 Maulen Ashimbayev during the interview with Tengrinews. Photo credit: senate.parlam.kz

The two-day congress, to be held in Nur-Sultan on Sept. 14-15, will serve as a platform to promote inter-religious and inter-civilization dialogue at a time when “increased levels of conflict, confrontation, and sanction wars in the world resulted in a certain political standstill,” said Ashimbayev.

“The congress also invites discussion of the role of education and religious education in combating radicalism and xenophobia. One of the panel sections will be devoted to combating extremism and terrorism. The role of religious organizations in strengthening the social status of women will also be on the congress agenda,” he said.

“No need to consider our forum as a purely religious event,” he added. “Spiritual leaders with representatives of international organizations and politicians will search for some joint ways and answers to the challenges and problems faced by all countries of the world.”

Pope Francis, the head of the Catholic Church and Sovereign of the Vatican City State, and Ahmed el-Tayeb, grand sheikh of al-Azhar, will be the speakers at the congress, along with leaders and representatives of Islam, Christianity, Judaism, Buddhism, Hinduism, Taoism, Shintoism, among other world religions.

Speaking about the visit of the Pope, Ashimbayev said that Pope Francis, being one of the most respected spiritual leaders of the modern world, could raise many issues beyond topics traditionally related to religion or the Catholic Church.

“He actively promotes the ideology of peace and calls for an end to the bloodshed. He has spoken many times about the situation in Ukraine and stopping the fighting. He raises issues of poverty, inequality, and support for women. This is a real spiritual leader who is being heard all over the world,” said Ashimbayev.

Last year in November Ashimbayev personally conveyed the invitation to the congress to Pope Francis on behalf of President Kassym-Jomart Tokayev during his visit to the Vatican. Ashimbayev recalled that the Pope had a “very friendly attitude toward Kazakhstan.”

“He said very kind words and praised the platform of the congress. He noted the role of this forum in bringing religions closer together and promoting a culture of dialogue,” said the Senate chairperson.

Despite the fact that the Patriarch Kirill of Moscow and All Russia will not be able to attend the congress, the Russian Orthodox Church will be represented at a high level, said Ashimbayev.

“I am sure that representatives of the Russian Orthodox Church (ROC) will actively participate in the dialogue within the forum. I think that there were some important events planned in advance for Patriarch Kirill of Moscow and All Russia. At the same time, the participation of other high representatives of the ROC will ensure the presence of the Orthodox Church at the forum,” he said.

Hosting the congress provides a PR boost for Kazakhstan, said Ashimbayev, but at the same time, “this event must be seen first and foremost as Kazakhstan’s attempt to contribute to global stability.”

“In today’s circumstances, our country, as a responsible member of the world community, contributes through this and other events to the promotion of a culture of dialogue,” he said.