Our Economies Are Complementary, Says Israeli Ambassador to Kazakhstan

NUR-SULTAN – The economies of Kazakhstan and Israel do not compete, but complement each other, Israeli Ambassador to Kazakhstan Edwin Nathan Yabo Glusman told The Astana Times. As the two countries mark 30 years of diplomatic relations this year, the Ambassador of Israel spoke about the dynamics in the bilateral ties and how Israel sees the partnership with Kazakhstan moving forward. 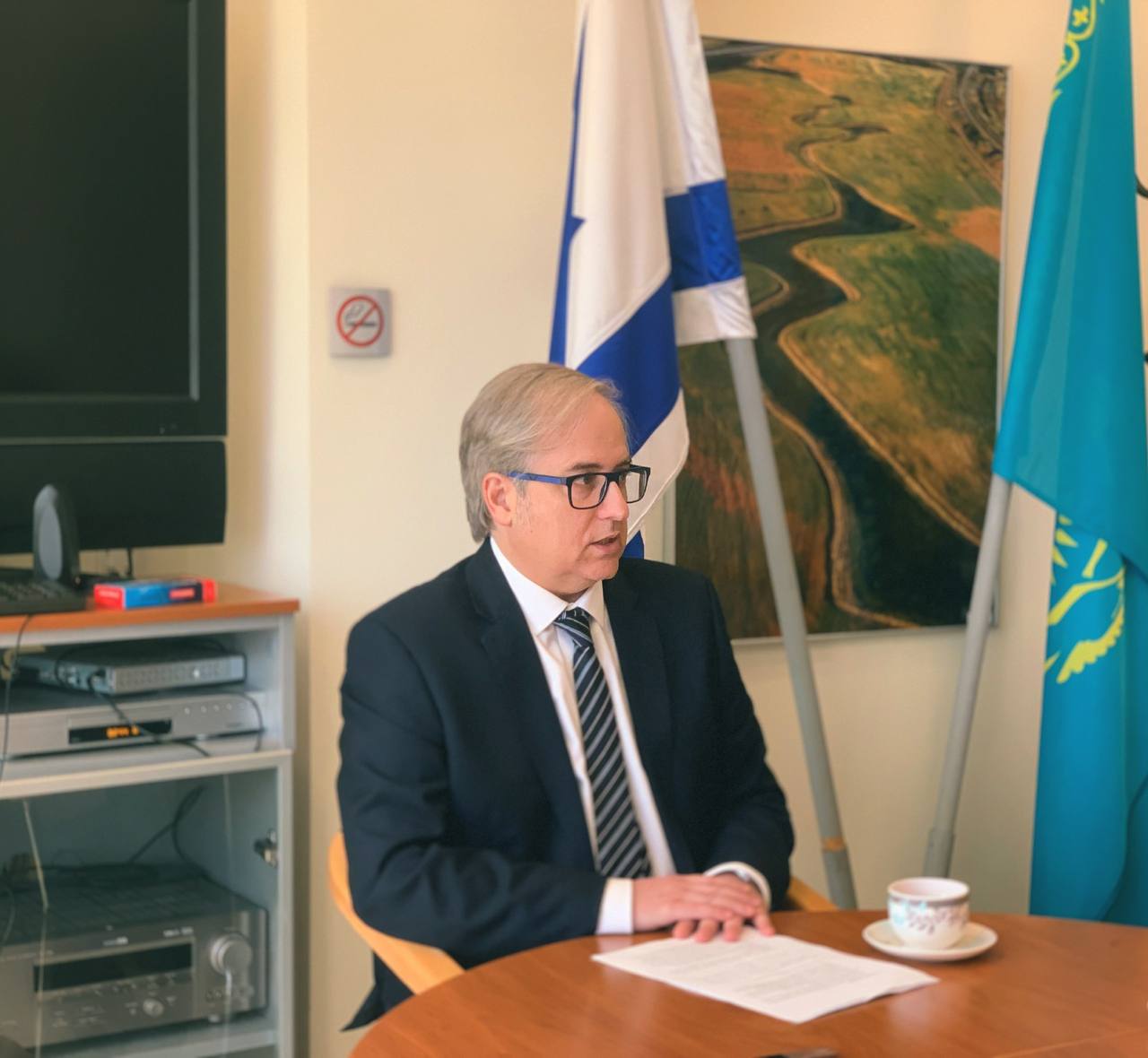 During the interview, Ambassador Yabo Glusman spoke in detail about the bilateral cooperation that this year celebrates 30 years. Photo credit: Israeli Embassy to Kazakhstan

“For Israel, obviously, its relations with Kazakhstan are very important, since Kazakhstan is one of the most important countries in Central Asia. The relations [were launched immediately] after the declaration of independence. In these 30 years, which is nothing, when we speak about historical processes, we are talking about two young countries and both countries complement each other. We do not compete, we complement each other,” said Yabo Glusman, emphasizing that Israel sees a lot of opportunities for cooperation with Kazakhstan.

As of December 2021, there were 93 active enterprises with Israeli participation registered in Kazakhstan. The trade turnover in 2021 reached $264.4 million, with exports accounting for $224 million. Between January and May 2022, the two countries traded for $227.6 million.

According to Yabo Glusman, Israel has yet to “discover Kazakhstan.” The suspension of direct flights between the two countries after the outbreak of the COVID-19 pandemic in 2020 has been a major obstacle to that.

“That is why we are pushing for direct flights. We want direct flights, because that is a way that people can come and go in a free flow, and that is the way to make a country known to others. It [referring to Kazakhstan] is a beautiful country worth visiting with amazing people and a lot of cultures here,” said the ambassador.

Yabo Glusman said that the potential is huge for cooperation in water management and resources, cybersecurity and technologies, and agriculture.

The July 12 meeting of the Kazakh-Israeli Intergovernmental Commission on Trade and Economic Cooperation in Nur-Sultan reviewed the trade prospects in detail. At the meeting, Kazakh Minister of Trade and Integration Bakhyt Sultanov, who co-chairs the commission, said the Kazakh companies are ready to deliver 70 processed goods worth $360.7 million to Israel.

Speaking about the key outcomes of that meeting, Yabo Glusman said that there was a possibility to conduct joint research into new types of crops.

“With what is going on in the world, food security became a huge issue. Kazakhstan can provide a solution, at least in part for that problem. There is a huge potential for Kazakhstan and Israel to go forward and look for new crops and probably a new type of wheat that can be produced here in Kazakhstan,” said the Ambassador.

Water management has been a common challenge for Kazakhstan and Israel. Over the years, Israel has managed to change from a water-poor country located in a desert to one that exports water to other countries in the region.

“In the 1990s, Israelis were urged to save a lot of water, because we did not have water. Now we export water to other countries in the region. It is very interesting what we can do with water. This is something that countries should manage, even if you have water, you have to do it well in a proper manner. (…) And in Kazakhstan, they are eager and willing to do so,” he said.

The first thing in water management, however, is to build the legal framework, besides technology and infrastructure.

“I think that is crucial. Kazakhstan and Israel are cooperating in that. We have a field trip to Israel at the end of the year, where 10 people from Kazakhstan will go to Israel in cooperation with the UNEP (UN Environment Program),” he said.

Yabo Glusman is also optimistic about the cooperation between Kazakhstan and Mashav, Israel’s official international development cooperation program. As part of the program, at least 700 doctors from Kazakhstan went to Israel for training.

“Kazakhstan is not a recipient of help from our agency, because it is a developed country. But these capacitation trainings are held even with developed countries,” he added.

Mashav has also held talks with Kazakhstan’s own official development assistance agency – KazAID – as the parties discussed the prospects of elaborating joint projects in Central Asia and Afghanistan.

Innovations is another area where Kazakhstan can benefit from cooperation with Israel, considering its ambitious goals to develop innovations and the tech sector. Israel is among the countries with the world’s highest per capita funding for research and development. In 2020, R&D expenditures accounted for 5.4 percent of the country’s gross domestic product.

“We would like to make a day of Kazakh-Israel innovation here in cooperation with the Astana Hub. There are a lot of very smart people here that deal with coding and all the fields related to innovation, startups and great ideas. We can cooperate and we can complement our knowledge with the knowledge here, which is really vast, try to look for international markets for capitals, venture capitals, and bring in those capitals to Kazakhstan,” he said.

For Yabo Glusman, who arrived in Kazakhstan in January, his diplomatic mission in the country became his first encounter with the region of Central Asia.

“For me, it is amazing to be here, studying and learning, a new place for me and a new culture. The acceptance of this country by Israel and vice versa is huge. I found a lot of people with great initiatives and the potential to grow. It is a young country that wants to push for political reforms and Israel supports President’s efforts toward these political reforms, bringing more transparency and democracy to Kazakhstan. No question that this country will grow geometrically and we will be glad to be there to do it and grow together,” concluded Yabo Glusman.