By Assem Assaniyaz in Central Asia on 15 August 2022 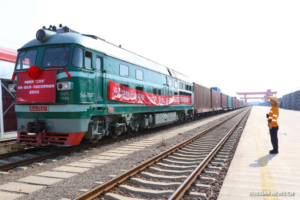 The first cargo train sets off on Aug. 13. from China to Uzbekistan via Kazakhstan. Photo credit: english.news.cn

The first cargo train departed from Wuxi, a city in southern Jiangsu province in East China. The shipment via rail track is projected to take nearly 20 days.

More than 1,000 goods, including household appliances and auto parts with a total cost of $4.4 million, are heading to Uzbekistan through the territory of Kazakhstan.

The train will pass through the Lianyungang seaport, where the Kazakhstan logistics terminal has been operating since 2014.

According to the Kazakh Economic Research Institute (ERI), the trade turnover between Kazakhstan and China has reached a record-breaking $11 billion in the first half-year.