By Sheikh-ul-Islam Allahshukur Pashazade in Congress of Leaders of World and Traditional Religions, Op-Ed on 16 August 2022

In the name of Allah, the Gracious, the Merciful! 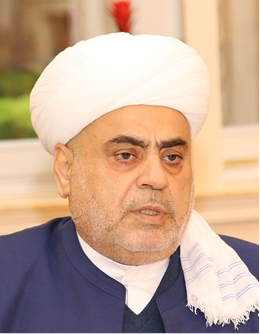 The fraternal countries of Azerbaijan and Kazakhstan are united by common ethnic roots, language, history, religion, culture, as well as historical traditions of interethnic and interreligious tolerance. The countries are located at the crossroads of world civilizations, therefore the preservation of the religious and cultural diversity of nations is an important part of our countries’ policy. Praise be to Allah, both in Kazakhstan and in Azerbaijan all conditions have been created to ensure and develop multiculturalism, interreligious peace and cooperation. Considering these factors, Kazakhstan, in particular, initiated the creation of the Congress of World and Traditional Religions. This idea naturally comes from the way of life and traditions of our societies, in which people of different nationalities and religions live in peace and harmony for many centuries.

As a result, this event, which is attended by influential religious figures, representatives of international organizations, scientific and public circles, is held in Kazakhstan – a country where mutual understanding and tolerance reign. Kazakhstan, connecting East and West through the historical corridor of the Silk Road, makes an invaluable contribution not only to the expansion of economic cooperation, but also to the development of relations between religions and civilizations. The atmosphere of tolerance that has been formed over the centuries, the ethnic and cultural diversity that has been preserved, and the support for the national and spiritual solidarity of the Turkic-speaking peoples, as well as their socio-political stability, is a historical achievement in ensuring the sustainable and successful development of Kazakhstan.

The Congress of Leaders of World and Traditional Religions plays an important role in the development of dialogue and cooperation between peoples and religions. As a permanent participant of the Congress and a member of its Secretariat, I want to emphasize one important distinguishing feature of this forum. The congress is a permanent platform not only for dialogue between spiritual leaders, but also for meetings and exchange of views between politicians, public figures and representatives of religions.

It should be noted, unfortunately, that cases of ideological and practical threats such as xenophobia, Islamophobia, Christianophobia and anti-Semitism are growing in the world, which are serious obstacles to international stability and security. Today, calls for hatred that provoke aggression, violence and discrimination have become a real political and social threat. As a result of the ideological impact of such appeals, stability in various regions is undermined, which leads to a split and conflicts between people, war crimes, and genocide.

It is the duty of every political and religious leader to refrain from making speeches that incite hatred and confrontation under the pretext of freedom of speech and democracy. I believe that as religious, political, scientific and public figures, having shown solidarity at the seventh Congress, we will strongly condemn in the final document all forms and manifestations of terrorism, incitement to hatred, xenophobia, the use of religion for personal or political purposes, as well as acts of extremism against believers in churches, mosques, synagogues and other religious temples, and will lift up our voices of protest against insults to religious symbols and shrines.

In the speeches heard at the sixth Congress of Leaders of World and Traditional Religions, held in October 2018 in Astana, as well as in the documents adopted by the Congress, we emphasized and highlighted in detail the special role of religions in achieving peace and security, mutual understanding and solidarity between people in a changing world. At that time, we did not yet know what adversities we would encounter in the near future. We could not imagine that global threats and dangers, among which is the challenge of climate change, would be supplemented by a new disaster that has shaken the entire world – COVID-19.

Preparations for the seventh congress are taking place precisely at a challenging time, when the whole world, including the religious sphere, is forced to adapt to new conditions of life, when cooperation between the state and religion has become of particular importance in overcoming threats, challenges and problems, as well as their consequences.

We are confident that Kazakhstan, as noted by Kazakh President Kassym-Jomart Tokayev, will continue to do everything possible for peace and stability on the planet and will continue to ensure the activities of the congress, filling it with new content. I am convinced – and have always emphasized this – that it is possible to achieve real results in the struggle against the negative trends taking place in the modern world only with the direct cooperation of government, public and religious figures. At many international events, in particular, at the 19th meeting of the Secretariat of the Congress of Leaders of World and Traditional Religions, held in October of 2021, I have repeatedly emphasized the relevance of this historically significant initiative for the development of dialogue between religions and civilizations, put forward by Kazakhstan 19 years ago. The main thing that reflects the historical significance of the Congress is that this initiative was the first in the modern world, a qualitatively new platform for interreligious and intercultural dialogue, which brought together political, public figures and religious leaders.

We express our deep gratitude to President Tokayev for the implementation of the mission from the highest level, which aims to unite the efforts of representatives of world and traditional religions, and statesmen and public figures for achieving peace and security throughout the world. Friendly relations between President Tokayev and President of Azerbaijan Ilham Aliyev enjoy overwhelming approval from our communities. The fraternal greetings of the leader of Kazakhstan on Azerbaijan’s victory in the Patriotic War were received with great gratitude.

Praise be to Allah, Azerbaijan and Kazakhstan have ample opportunities for further cooperation and deepening of both bilateral and multilateral relations for the development and promotion of common cultural and spiritual values ​​in all areas of mutual interest, in particular, within the framework of the Organization of Turkic States. In this regard, it should be noted that thanks to the comprehensive support of Kazakhstan, the idea of ​​creating a Council of religious leaders of the member countries of the Organization of Turkic States has become real and is close to its final implementation. We consider this our common moral insight, since the promotion of the contribution of the Turkic-Islamic spiritual and cultural heritage to world civilization is of great importance.

We are confident that the independence and statehood of Kazakhstan will be increasingly strengthened, and that the brotherly Kazakh people will continue to follow on the path of progress, relying on the unity of the state and people. We also rely on the will of the Almighty that the seventh Congress of Leaders of World and Traditional Religions, dedicated to a current and topical issues, will be held in the spirit of constructive discussions and will contribute to the development of dialogue between civilizations, and the promotion of such universal human values as friendship and mutual understanding.

The author is Sheikh-ul-Islam Allahshukur Pashazade, Chairman of the Muslim Board of Caucasus, Co-Chairman of the Interreligious Consultative Council of the Commonwealth of Independent States.