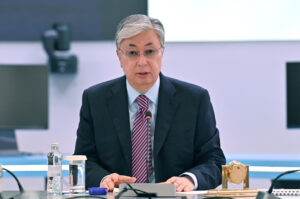 Tokayev emphasized the need to enhance the country’s transport and transit potential and ensure safe and uninterrupted export of domestic products amid the disruption in logistics due to the geopolitical situation and the sanctions.

The head of state instructed the KazMunayGas [national oil and gas company] to work out the use of the Trans-Caspian International Transport Route (TITR) for oil exports.

“The Trans-Caspian route is a priority. I instruct KazMunayGas to work out the best option for its implementation, including the possibility of attracting investors to the Tengiz project. The government and Samruk Kazyna Sovereign Wealth Fund  should take measures to increase the capacity of the Atyrau-Kenkiyak and Kenkiyak-Kumkol oil pipelines,” Tokayev said.

The Trans-Caspian route, also known as the Middle Corridor, an international corridor that starts from Southeast Asia and China, runs through Kazakhstan, the Caspian sea, Azerbaijan, Georgia, and further to European countries.

“Kazakhstan has never been a maritime country, and therefore has not fully utilized the possibilities of sea transportation. Now is another time. I set a strategic task for the government – to transform our ports turning them into one of the leading hubs of the Caspian sea. Conceptually, I agree that it is necessary to strengthen the navy and create a container hub in the Aktau Sea сommercial port,” said Tokayev.

Since the beginning of this year, the Aktau Sea commercial port has doubled its traffic volume through the Caspian sea up to 1.2 million tons of cargo.

According to Tokayev, the functioning of alternative railway routes will also preserve the reliability of Kazakhstan as a transit hub in the Central Asian region, in particular, the Dostyk – Moynty, Bakhty – Ayagoz, Maktaaral – Darbaza projects, as well as the construction of a railway line bypassing Almaty.

Tokayev also proposed to carry out a large-scale modernization of the Kazakhstan Temir Zholy (KTZ) national railway operator and transform it into a national transport and logistics company.

“This will expand the mandate and tasks of KTZ and will allow the company to work more comprehensively on the development of the country’s transport and transit potential,” he said.