By Assem Assaniyaz in Business on 3 June 2022 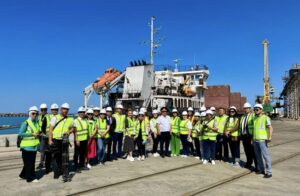 Since the beginning of this year, more than 1.2 million tons of cargo have been loaded in the Aktau Sea commercial port, which is twice more than in the same period of 2021.

In February of this year, 1,657 TEU (twenty-foot equivalent unit) containers were transshipped, and in April the number increased to 3,099 TEU.

Head of Aktau Sea commercial port Abai Turikpenbayev said that the traffic volume on the TITR route will increase sixfold this year – up to 3.2 million tons.

For comparison, during a 10-month period in 2021, the volume of cargo transportation through the Aktau marine north terminal was 813,500 tons.

Serik Akhmetov, director-general of the Kuryk port, spoke about the work at the seaport.

Kuryk port also carries out the shipment of automobile transports. “The whole logistics of Turkey is based on cars, so we put a lot of emphasis on creating a special corridor for motor transport,” he added.

TITR, also known as the Middle Corridor, starts from Southeast Asia and China, runs through Kazakhstan, the Caspian sea, Azerbaijan, Georgia and further to European countries, and is part of the new so-called Silk Road. It functions similarly to the ancient Silk Road, which connected Asia with the Mediterranean and the European world during the Middle Ages.