By Staff Report in International on 16 June 2022

NUR-SULTAN – Pope Francis expressed hope to meet with Russian Orthodox Patriarch Kirill at the seventh Congress of Leaders of World and Traditional Religions scheduled for Sept. 14-15 in Nur-Sultan. This was announced in Pope Francis’s interview with the Jesuit magazine La Civiltà Cattolica published on June 14. 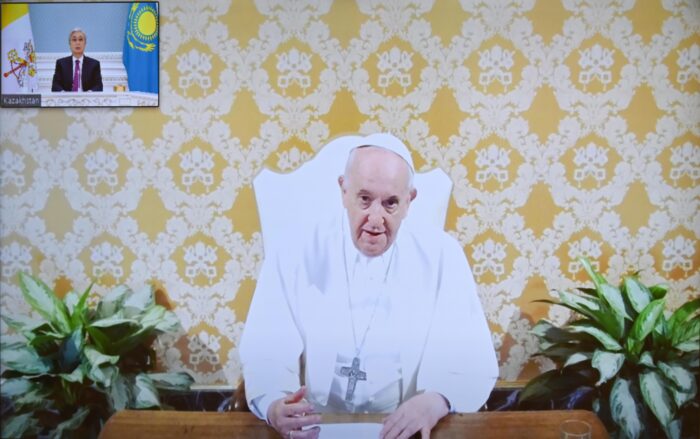 Pope Francis confirmed his official visit to Nur-Sultan and participation in the VII World Congress of Leaders of World and Traditional Religions during talks with Kazakh President Kassym-Jomart Tokayev via videoconference in April. Photo credit: Akorda Press

“We were supposed to meet on June 14 in Jerusalem,” Pope Francis said. But due to the situation in Ukraine, it was agreed to postpone the meeting to a later date.

Earlier, Pope Francis reaffirmed his intention to attend the interreligious event in Kazakhstan, saying that Kazakhstan has been a reliable partner of the Vatican in Central Asia.

This April, Pope Francis also had talks with Kazakh President Kassym-Jomart Tokayev via videoconference to discuss the agenda of the upcoming congress.