NUR-SULTAN – Pope Francis commended Kazakhstan’s contribution to the promotion of interfaith harmony and interreligious dialogue during his May 31 meeting with Kazakhstan’s Deputy Prime Minister – Minister of Foreign Affairs Mukhtar Tileuberdi, reports the Foreign Ministry press service. Tileuberdi is on an official visit to the Holy See. 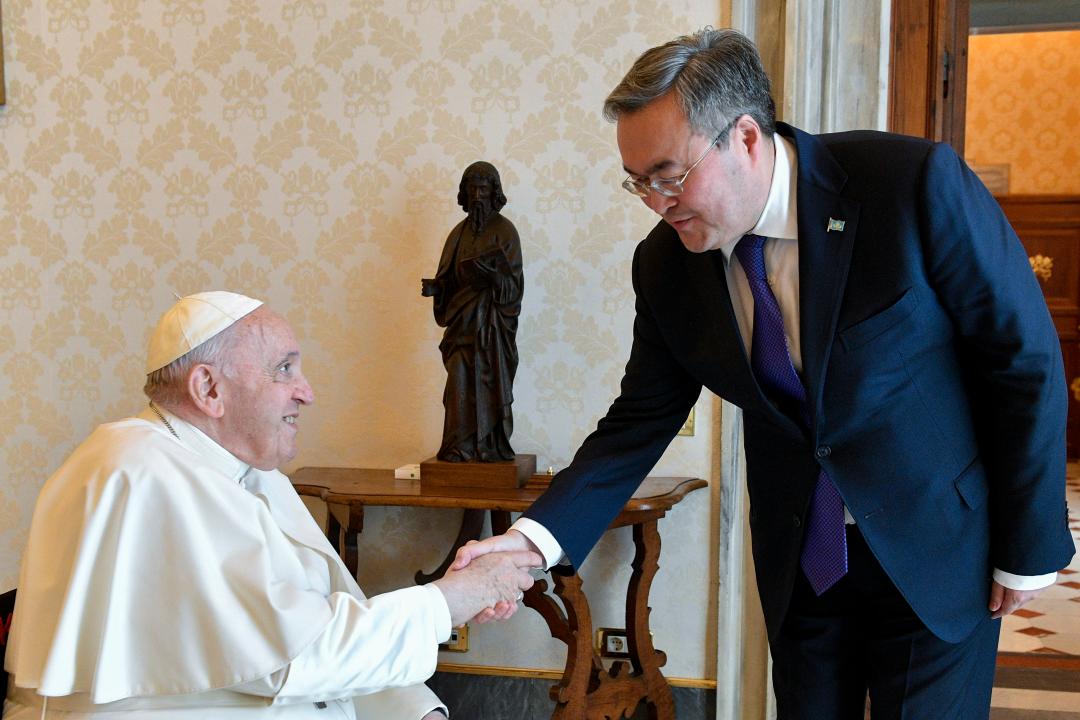 Pope Francis reaffirmed his intention to attend the VII Congress of Leaders of World and Traditional Religions scheduled for Sept. 14-15 in Nur-Sultan, saying that Kazakhstan has been a reliable partner of the Vatican in Central Asia.

He welcomed the political and economic reforms initiated by President of Kazakhstan Kassym-Jomart Tokayev to build a New Kazakhstan and the June 5 national referendum on amendments to the Constitution.

Pope Francis, who had talks with President Tokayev via videoconference on April 11, and Tileuberdi discussed the agenda of the upcoming VII Congress of Leaders of World and Traditional Religions that is expected to convene religious leaders from all over the world to discuss the role of leaders of the world and traditional religions in the spiritual and social development of humankind in the post-pandemic period.

According to the minister, Catholics not only from Kazakhstan but also from all over Central Asia are looking forward to the Pope’s arrival.

On the same day, Tileuberdi held separate bilateral talks with the Secretary of State and Prime Minister Cardinal Pietro Parolin of the Holy See and President of the Pontifical Council for Interreligious Dialogue Cardinal Miguel Ángel Ayuso Guixot, where he focused on the development of cooperation between Kazakhstan and the Holy See in the field of spiritual harmony and mutual respect.

The congress, which had to be postponed until 2022 due to the COVID-19, is a key initiative of Kazakhstan, which has advocated for interfaith dialogue, peace, and accord since its independence. The congress was first convened on Sept. 23-24, 2003 at the initiative of First President Nursultan Nazarbayev and has been held every three years since then. Representatives of the Catholic Church were among the first to support the idea of ​​the Congress.