in Congress of Leaders of World and Traditional Religions, International on 11 April 2022

NUR-SULTAN – The Pope Francis, the Head of the Catholic Church and Sovereign of the Vatican City State, confirmed his official visit to Nur-Sultan and participation in the VII World Congress of Leaders of World and Traditional Religions during talks with Kazakh President Kassym-Jomart Tokayev via videoconference, reported Akorda press service. 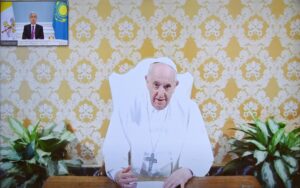 The Pope Francis, the Head of the Catholic Church and Sovereign of the Vatican City State. Photo credit: Akorda Press.

The Congress of the Leaders of World and Traditional Religions is to be held Sept. 14-15 in the capital of Kazakhstan.

“I look forward to this important event from the point of promoting interreligious dialogue, and for the theme of unity to bring countries, which is much needed for the world today,” the Pope Francis stated.

“We see how diverse and united your country is. This is a basis for stability. We are happy that in Kazakhstan you understand this. You can count on my support, and I appreciate your efforts,” the Head of the Catholic Church said.

Last year, the members of the Secretariat of the Congress postponed the date of the event to 2022 due to the epidemiological situation worldwide.The last official visit to Kazakhstan by a head of the Roman Catholic Church, namely John Paul II, took place 21 years ago, on Sept. 22, 2001. The event took place days after the 9/11 terrorist attacks in New York, amid the fears of a major war on inter-religious and inter-civilizational grounds and served well to show the world the culture of tolerance and domestic accord within the Kazakh society. It also played an important role in launching two years later the Congresses of Leaders of World and Traditional Religions, held since 2003 triennially in Nur-Sultan.