NUR-SULTAN – This year, Kazakhstan commemorates the 30th anniversary of Kazakhstan’s membership in the United Nations Educational, Scientific, and Cultural Organization (UNESCO), which the country joined on May 22,1992. 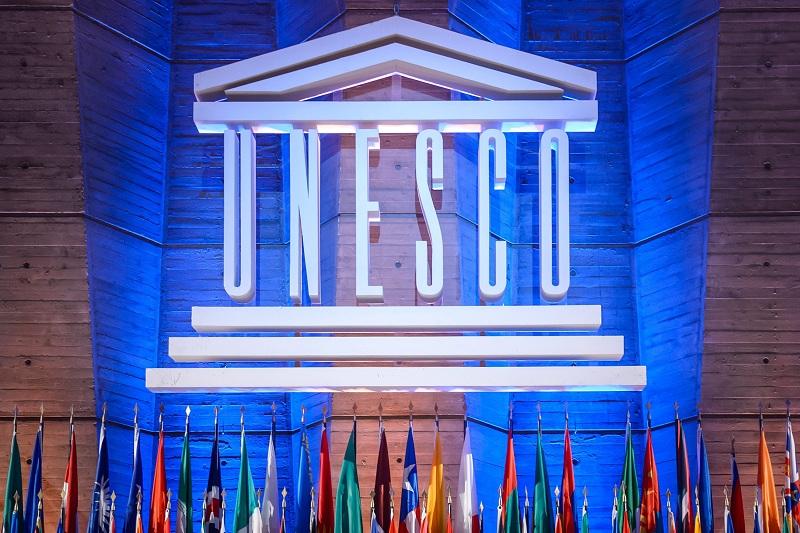 “This anniversary is an occasion to sum up the results of collaborative work, which is aimed at promoting quality education for everyone, protecting and developing cultural heritage, developing science, and setting new goals for the preservation of peace and the achievement of Sustainable Development Goals (SDG),” said National Commission for UNESCO of Kazakhstan Secretary General Aliya Baisabayeva in an interview with The Astana Times.

According to the Kazakh Ministry of Foreign Affairs, after becoming a full-fledged member of the organization, Kazakhstan put a great value on strengthening cooperation with UNESCO in the fields of science, culture and education.

In the field of science, Kazakhstan created four national committees working on UNESCO’s global programs including the International Hydrological Program, Man and the Biosphere, Bioethics, and UNESCO Global Geoparks. In November 2019, Kazakhstan was elected to the International Coordinating Council of the Man and the Biosphere (MAB) Program until 2023.

On May 28, 2020, the Central Asian Regional Glaciological Center under the auspices of UNESCO was created at the Institute of Geography in Almaty. 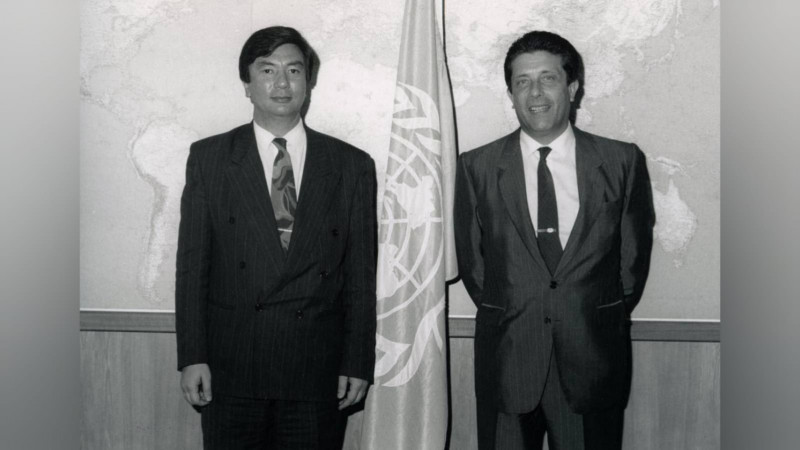 In May 1992, Kazakh President Kassym Jomart-Tokayev served as Kazakh Deputy Minister of Foreign Affairs. On this photo he is depicted with Director General of UNESCO Federico Mayor Zaragoza after signing a decree on Kazakhstan’s accession to UNESCO in Paris. Photo credit: presidential press service

As for the next area of cooperation, a resolution on promotion of interreligious and intercultural dialogue, understanding and cooperation for peace was adopted at the 67th session of the United Nations General Assembly.

Another institution, which reinforces the collaborative work between the country and organization, is the Almaty-based International Center for the Rapprochement of Cultures (ICRC).

Kazakhstan considers the achievement of the SDG 4 on quality education as a matter of high priority.

Thirty one local schools are certified with the UNESCO Associated Schools Network (ASPnet), while five UNESCO Chairs Programs are in operation in the country.

Since Kazakhstan became a party to the 1972 World Heritage Convention, there are five sites that have been added to the World Heritage List, including the Mausoleum of Khoja Ahmed Yasawi, which was the first memorial to enter the list back in 2003. 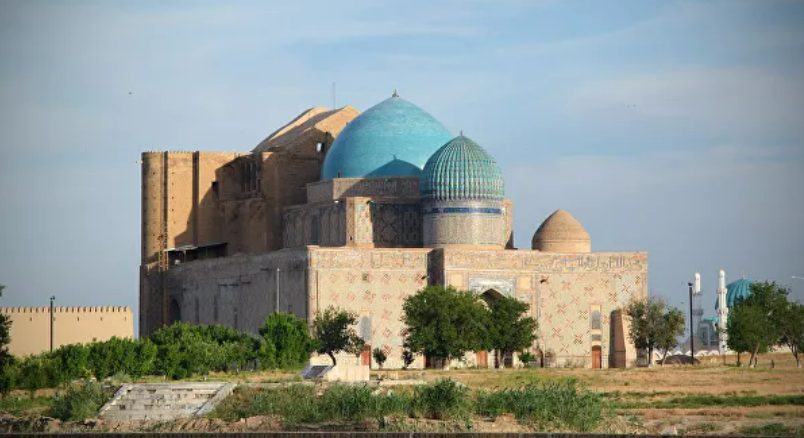 A total of 15 biosphere reserves in the country have been included into the World Network of Biosphere Reserves, while 11 nominations are in the UNESCO Representative List of Intangible Cultural Heritage (ICH) of Humanity.

Earlier in 2021, UNESCO added the 150th anniversary of prominent Kazakh scholar and poet Akhmet Baitursynov and the 100th anniversary of pop and opera singer Roza Baglanova, which the country commemorates this year, to its list of anniversaries for 2022-2023. 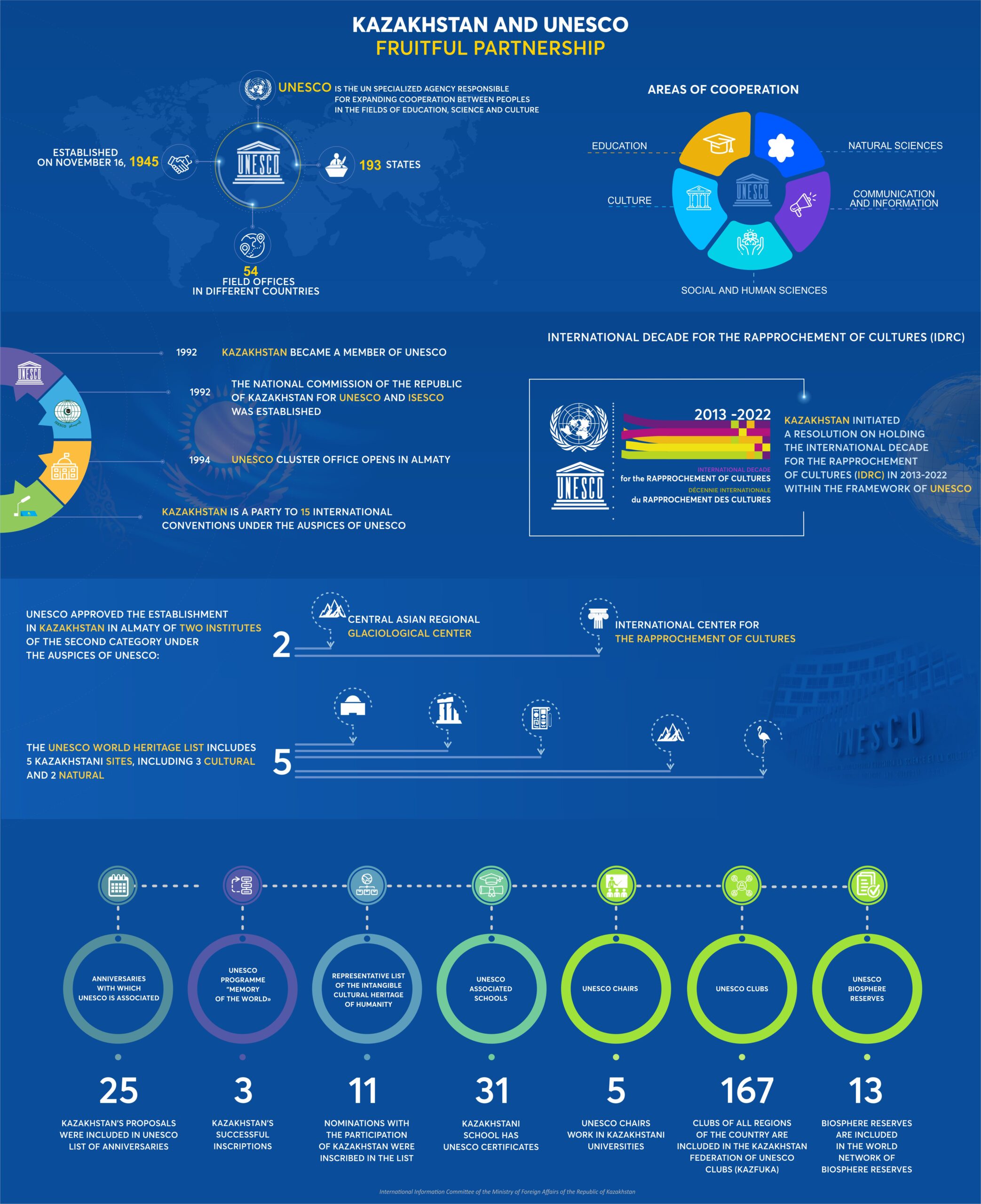