By Assem Assaniyaz in Congress of Leaders of World and Traditional Religions, International on 30 June 2022

NUR-SULTAN – Chair of the Nazarbayev Center for the Development of Interfaith and Inter-civilizational Dialogue Bulat Sarsenbayev spoke about the preparations for the seventh Congress of Leaders of World and Traditional Religions at the June 27 roundtable titled New York Celebrates Kazakhstan in New York, reports the Kazakh Ministry of Foreign Affairs. 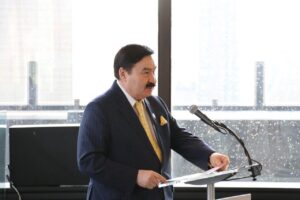 Bulat Sarsenbayev, Chair of the Nazarbayev Center for the Development of Interfaith and Inter-civilizational Dialogue. Photo credit: Kazakh Foreign Ministry

“Our main goal is to unite people of different faiths for a direct dialogue on complex issues,” said Sarsenbayev. He stressed the importance of contributing to a peaceful future for all humanity by promoting interreligious and inter-civilizational discourse. 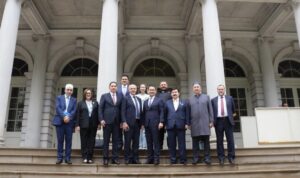 The roundtable was held at the New York City Mayor’s Office with the support of Kazakh Embassy in the United States and Foundation for Ethnic Understanding (FFEU).

Ambassador of Kazakhstan to the United States Yerzhan Ashikbayev told the meeting that the congress will provide constructive dialogue on the most important issues of our time.

Representatives of the Mayor’s Office in New York, religious associations, scientific circles, and media got acquainted with the activities of the Nazarbayev Center, as well as with the main stages of the development of the congress.

During his working visit to New York, Sarsenbayev invited the Secretary General of the Religions for Peace (RfP) non-governmantal organization Azza Karam, and President of Civilizations Exchange and Cooperation Foundation (CECF) Imam Mohamad Bashar Arafat to the upcoming congress. Both sides expressed their readiness to take an active part in its work.