NUR-SULTAN – The Ulytau Region, a sacred place for Kazakhstan, hosted the first National Kurultai (congress in Kazakh) today to outline the priorities of the work of the new institution and the country’s development. 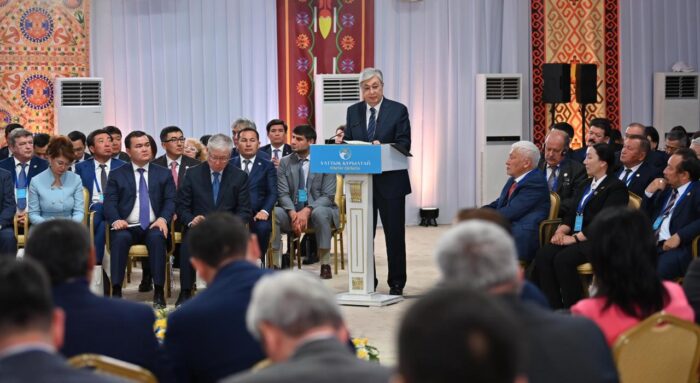 “It was right to begin the National Kurultai in Ulytau. This sacred land has become a symbol of unity as we build New Kazakhstan,” said President Kassym-Jomart Tokayev, who proposed the initiative to set up the kurultai back in March.  He signed the decree defining the functions and announcing the members on Wednesday, including State Counselor Erlan Karin, President of Serpin National Education and Innovations Chamber Murat Abenov, prominent social entrepreneur Emin Askerov and scientist Kunsulu Zakarya, who led the team that developed QazVac vaccine, among other members.

The kurultai will be a place to generate “sensible and fresh ideas that unite the nation.”

Addressing the meeting of the 107-member kurultai, Tokayev, who arrived in the region early in the morning, highlighted priorities moving forward – strengthening national unity, communicating the reforms to the population, and expanding public involvement in decision-making. 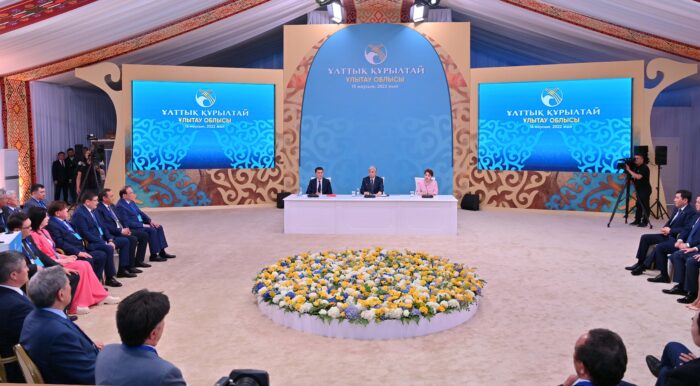 “We will build a strong civil society with a strong tradition of democracy. This is our strategic direction. We must adhere to it. Over the past three years, we have achieved some results in this area. We have established a meaningful dialogue between the authorities and the people,” said Tokayev, emphasizing the importance of a plurality of opinions.

In communicating the reforms to the people, the focus should be on the younger generation.

“Now is the age of the Internet. Young people get the information they need from the internet. Along with traditional media, it is necessary to pay attention to social networks. New approaches must be used to inculcate the importance of modernization in the minds of future generations,” said Tokayev.

President Kassym-Jomart Tokayev and participants of the meeting.

Speaking about globalization and technologies that are increasingly impacting the lives of ordinary people, Tokayev instructed the government to develop a mobile application, where all citizens will have an opportunity to have a say on how the country should develop further.

“All this lays the foundation for a technological platform for the development of digital democracy. Developed countries are striving for this. We must not lag behind global civilization. It is necessary to create an electronic version of the National Kurultai,” said the President.

Tokayev stressed the importance of strong support for the current course among the population, which has long been waiting for real changes. Nearly two weeks after the national referendum that adopted the constitutional amendments, the work begins only now, said Tokayev.

“We will change the laws on elections, political parties, and several others. This is very important for the successful modernization of the country. It can take months or even half a year to pass a law. However, the reform should not be delayed. People want real change now. Therefore, our deputies must continue to compile the main bills from now on,” said Tokayev, instructing the Parliament to adopt the laws by the end of the year.

He called on the citizens to respect the Kazakh language and state symbols.

“Concerns about the Kazakh language stem from a misunderstanding of the situation in the country. In fact, it is impossible to compare the past with the present. The position of the state language is strengthening day by day… Just recently, Apple added the Kazakh language to the iOS language system. Nickelodeon, a TV channel broadcasting in 40 languages, started broadcasting in Kazakh. At the initiative of young people, National Geographic has been published in our native language for six years. There are good news indeed,” said Tokayev.

He also spoke about the transition of the Kazakh language from the Cyrillic alphabet into the Latin one, a move that the nation has tried twice to complete. According to Tokayev, the transition is a much more complex process than just changing the corresponding letters.

“It is necessary to conduct a comprehensive, in-depth analysis of this issue and make a bold decision. It is impossible to switch [the alphabet] artificially, only by changing the corresponding letters. Otherwise, it will lead to a big mistake. The main thing is that citizens, especially our youth, should know the order of the spelling of all words in the Kazakh language in Latin script. It is, therefore, necessary to reconsider the spelling rules for our language,” said Tokayev.

Wrapping up his speech, Tokayev reiterated the importance of peace and stability in Kazakhstan, where the unity of the people is the priority.

“The situation in the world today is volatile. You know it well. It is very important that our unity is strong in these difficult times. We overcome all difficulties through unity. We must continue to follow this path in the future,” said Tokayev.