By Staff Report in Constitutional Referendum, Nation on 19 May 2022

NUR-SULTAN – State Secretary of Kazakhstan Erlan Karin published a video on May 17 explaining the constitutional amendments and categorizing them in five key blocks. The video went online on his YouTube channel. 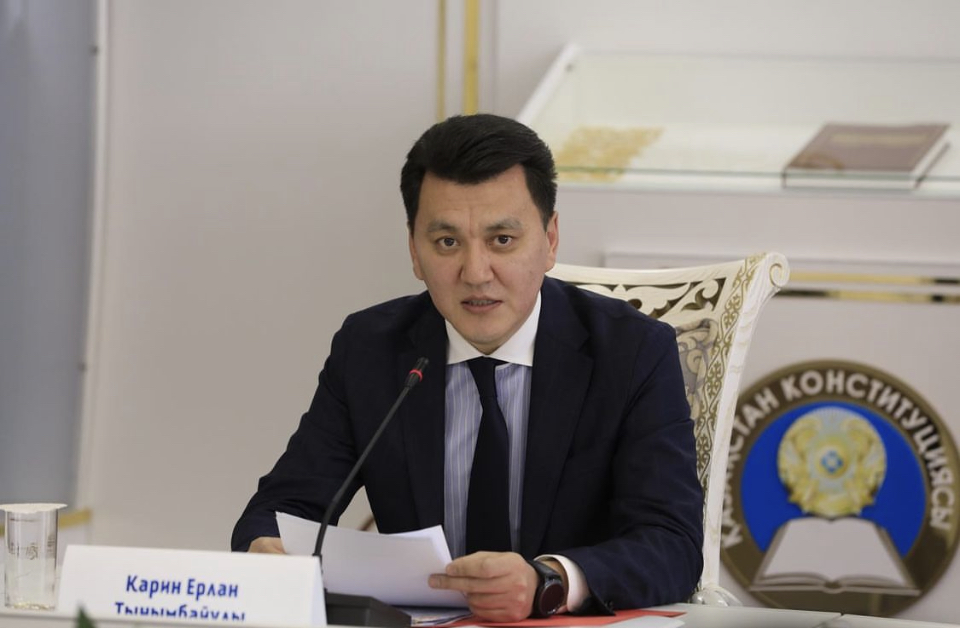 The national referendum is scheduled for June 5. According to the preliminary data, nearly 11.8 million people are eligible to vote in the referendum.

“Today, at the new stage of development, Kazakhstan expects a large-scale political modernization, which is impossible without the constitutional reform. Changes will affect one-third of the articles of the Constitution,” he said at the beginning of the video.

“It may be difficult for many of you to immediately see the difference between the old and the new version of the Constitution. That’s why we have divided all changes and amendments into five major blocks, where each answers the main question – what will change in the updated Constitution,” said Karin.

First block – transition from super-presidential model to a president republic

The first block addresses the final transition from a super-presidential model to a presidential republic – something that Tokayev promised in his March 16 state-of-the-nation address and what he has started to implement by stepping down as the chair of the ruling Amanat party.

These amendments prohibit the President to be affiliated with any political party for the duration of his or her term of office. The same rule applies to the presidents and judges of the Constitutional Court, the Supreme Court, and other courts, the chairpersons and members of the Central Election Commission, as well as the Supreme Audit Chamber.

“The advantage of the amendment is increased political competition and the creation of equal conditions for the development of all political parties,” added Karin.

This block of amendments also introduces a ban on close relatives of the President to hold positions of civil servants and heads of quasi-public sector entities and strips the right of the President to remove akims (mayors) of districts, cities, and rural districts from office.

The presidential quota in the Senate, an upper chamber of the Kazakh Parliament will be reduced from 15 to 10 deputies, and five of them will be proposed by the Assembly of the People of Kazakhstan, a consultative and advisory body representing ethnic groups living in Kazakhstan.

Third block – strengthening the role and enhancing the status of Parliament

The quota of the Assembly of the People of Kazakhstan from the Mazhilis, the lower chamber of the Parliament, is transferred to the Senate and reduced from nine deputies to five.

Deputies of the Mazhilis will be elected by a mixed electoral system: by a system of proportional representation in the territory of a single nationwide constituency, as well as in single-mandate territorial constituencies (new version of paragraph 3 of Article 50 Constitution). The introduction of a mixed electoral system will make it possible to fully take into account the rights of all citizens and better reflect the interests of voters.

“It is proposed that the Mazhilis will adopt laws and the Senate will approve or not approve them. This will strengthen the mechanism of checks and balances in the political system,” said Karin.

“The most important thing is that the Constitution finally and unambiguously fixes the norm that the land and its subsoil, waters, flora, and fauna and other natural resources belong to the people. The state implements property rights on behalf of the people,” said Karin.

Akims of regions (governors), cities of national status, and the capital (mayors) will be appointed to office by the President only with the consent of all deputies of maslikhats (local legislative bodies) of a given region. The President will propose at least two candidates to be voted on. The candidate with the highest number of votes will be appointed to the position.

Fifth block – strengthening the protection of the rights of citizens

The amendments will give the citizens the right to directly appeal to the Constitutional Court for a review of normative legal acts directly affecting their rights and freedoms for compliance with the Constitution.

They also finalize the country’s commitment to abolish the death penalty at the constitutional level. The Constitutional Law will also regulate the work of the Prosecutor’s Office.

“This will strengthen systemic human rights activities and supreme supervision over the observance of the rule of law in the territory of the country on behalf of the state,” he added.

The human rights ombudsperson will also receive immunity and guarantees of independence and unaccountability to any state bodies and officials and will have the right to appeal to the Constitutional Court.

“The amendments I have listed affect the fundamental principles of the state’s work and have historic significance for Kazakhstan. These reforms are the most important stage of large-scale political modernization. Following the adoption of these amendments, more than 20 laws will have to be amended. The constitutional reform is systemic in nature improving the efficiency of the entire state model. And the effect of these changes will be felt by every citizen of Kazakhstan,” said Karin.