NUR-SULTAN – Less than three weeks are left before Kazakhstan will have a national referendum where citizens will vote on the amendments to 33 articles of the Constitution. According to the preliminary data collected by the Central Referendum Commission, lists of citizens with the right to participate in the referendum include 11,722,536 citizens out of the country’s 19 million population. 10,013 polling stations will open on June 5, the day when the referendum is to be held. 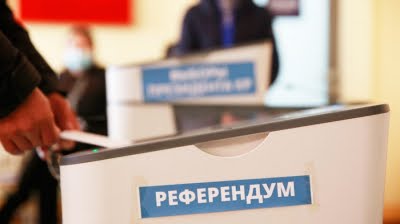 Kazakhstan held its last referendum in 1995 when it adopted the current Constitution. Since then, four packages of amendments have been introduced to the Constitution, but all of them were made through holding a vote in the Parliament. Photo credit: Qazaqtv.com

The commission met on May 17 to discuss the key procedures and preparations for the referendum that will cost the budget 16.5 billion tenge (US$38 million). The ballots, which will be delivered to the polling stations by May 28, will include one question – whether a person agrees with the amendments or not.

Citizens can now check online whether they are included in the lists. The akimats (governors’ offices) have launched online resources for citizens to check their presence on the voter lists and the area of their registration, based on their individual identification numbers. For Nur-Sultan city, there are several channels for this – the website, a Telegram bot, and through the IKomek call center.

The basis for the inclusion of a citizen in the list is the registration at the place of residence, on the territory of a polling station. To register, correct, and check address information, it is necessary to apply on the electronic government website.

Abdirov stressed the need for broader awareness-raising efforts among the population. Different channels must be used to notify citizens of the time and place of voting.

“This should be different, convenient, and effective ways of informing – from traditional, so-called invitations, to the use of modern devices and SMS-mailing,” he said, noting that the referendum is open to representatives of public associations, the media, and observers from foreign countries.

If endorsed, the amendments will strengthen the rule of law and promote separation of powers, checks and balances, said Indira Aubakirova, Doctor of Law and Professor at Narikbayev KAZGUU University at a press briefing on May 18.

While the country is in the process of changing its political landscape, many citizens still question the necessity of the referendum. But according to Aubakirova, there are several fundamentally important meanings, which dictate the need for constitutional amendments at this particular stage of the country’s development.

“First, the Constitution should perform an integrating, consolidating role and the intent of the head of state is precisely that we build a new Kazakhstan together and the task of updating the Constitution is also to strengthen trust in society. The updated Constitution is aimed at three concrete goals – the rule of law, strengthening of democratic processes and strengthening of the separation of powers, the mechanism of checks and balances,” said Aubakirova, who is also a member of the working group on the constitutional amendments.

She noted that the Constitution should have a real influence on social relations, saying that the lack of justice is always painfully perceived in any society, even more painfully than economic inequality. That is where the concept of the Second Republic becomes relevant by redefining the life of society and the functions of the state on the basis of fairness and equal opportunities.

“Referendums – as a political institution – show that in many countries they are very popular as an effective mechanism for taking into account the opinions of the population,” she said.