NUR-SULTAN – Kazakh President Kassym-Jomart Tokayev emphasized the need to focus on a fair justice system, a transparent economy, and competitive markets to ensure favorable conditions for the growth of the local businesses and foreign investment during a meeting with representatives of domestic businesses on May 19 in the Akorda. 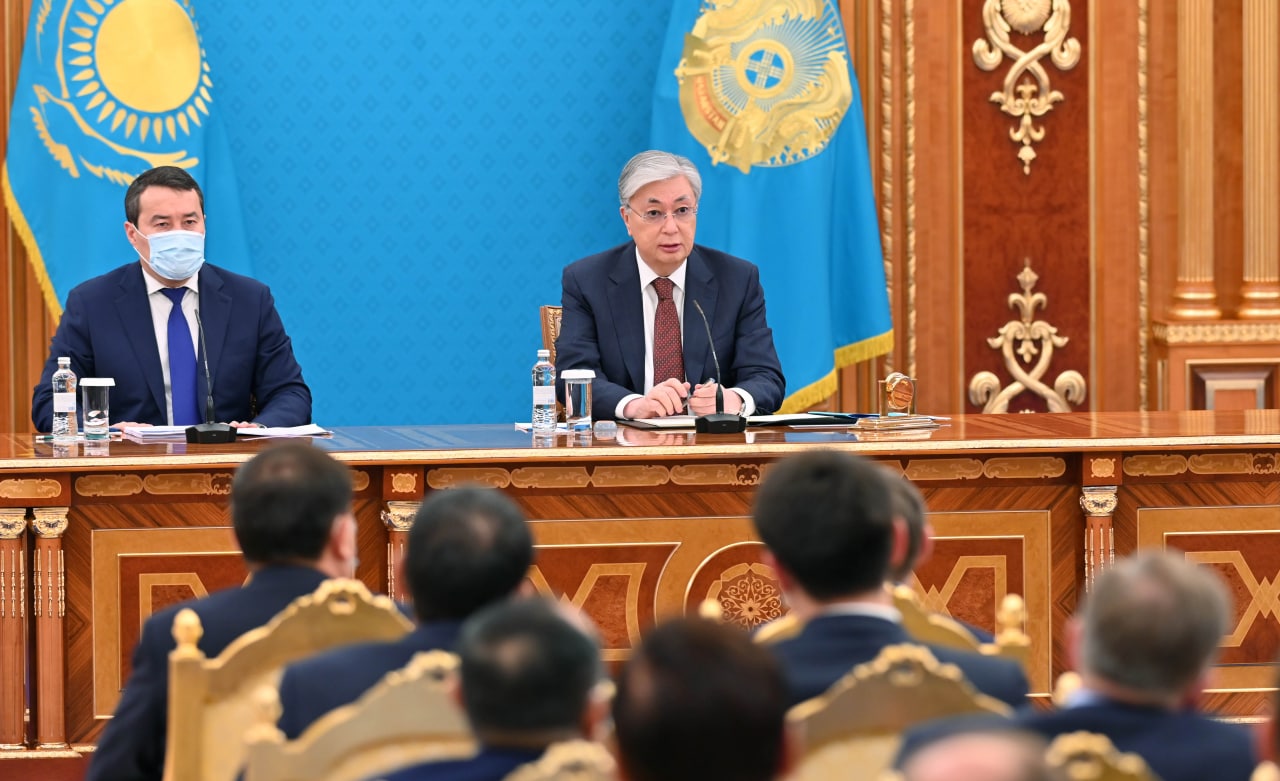 “As the Head of State, I will continue the policy of forming a transparent economy with fair rules of the game for everyone. We will not allow any redistribution of profitable locations and positions,” he said, opening the meeting with business representatives.

Ensuring an open and fair justice system and the rule of law are among the highest priorities of the government to allow for businesses to prosper. 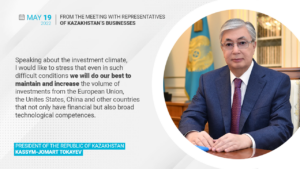 “The guarantee of judicial protection of private property and interests is a basic condition for developing the economy and attracting investment, that is to say, to ensure the overall progress of the country,” said President Tokayev.

The Constitution recognizes and equally protects both the state and private property, but according to Tokayev, practice lags behind policy.

“In practice we often prioritize the protection of the interests of individual state bodies, which are sometimes mistakenly understood as the interests of the state. With the introduction of administrative jurisdiction, we were able to reverse this trend, but there is still a lot of work,” he said.

Tokayev acknowledged the need for judicial reform is overdue. “We hear these calls from foreign investors, our entrepreneurs, and fellow citizens. Therefore, I will announce specific large-scale measures in this direction in the near future,” he said. 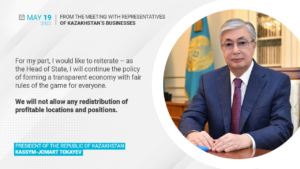 Using market mechanisms to regulate prices is also a key component in Tokayev’s proposals for business support. He said price regulation was a necessary step at a critical stage of Kazakhstan’s development, however excessive price regulation of competitive commodity markets “deprives the country of private investment.”

“As a consequence, the state is forced to invest in such [competitive market] industries, thereby increasing its presence in business in the form of opaque and clumsy operators,” Tokayev continued.

“We must be extremely careful not to deviate from the basic principles of a market economy. This applies both to commodity markets and to tariffs for the services of natural monopolies,” said Tokayev, adding that there is a need to accelerate competition in all sectors.

Given the geopolitical situation and the sanctions context, Kazakhstan aims to preserve the established ties as well as to expand investment partners. 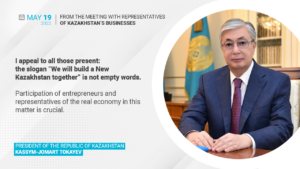 “I would like to emphasize that even in such difficult conditions we will do our best to maintain and increase the volume of investments from the European Union, the United States, China, and other countries that have not only financial, but also broad technological competencies,” said President Tokayev.

Turkey and other Central Asian countries were highlighted as increasingly important trade and investment partners for Kazakhstan.

President Tokayev emphasized that involvement of entrepreneurs and representatives of the real economy in these matters is crucial. “The slogan ‘We will build a New Kazakhstan together’ is not an empty word,” he said inviting businesses to participate in the process of developing effective reforms.

The previous meeting with business leaders was held in January, when President Tokayev urged business representatives to work with the government on building a new economic policy.