NUR-SULTAN – Kazakhstan will hold the constitutional referendum on June 5, President Kassym-Jomart Tokayev announced on Thursday in his video address to the nation. 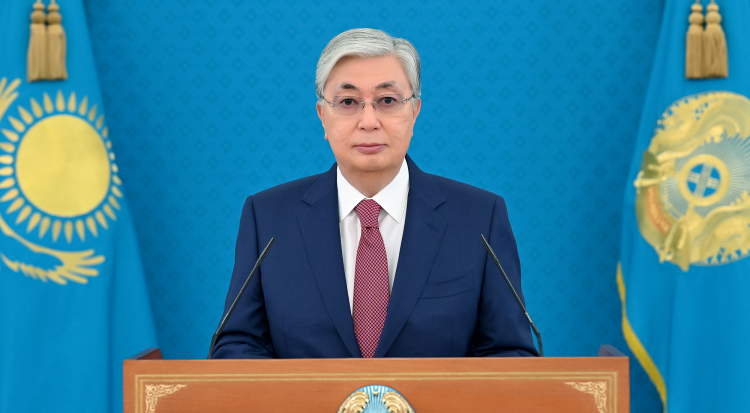 President Tokayev announces the date of the referendum in the video address. Photo credit: Akorda

“A general vote by citizens on the draft constitutional amendments will demonstrate our strong commitment to democratic principles. The upcoming referendum will allow every citizen to directly participate in a historic event that will determine the future of Kazakhstan. The constitutional reform is aimed at a comprehensive transformation of the entire state model,” said Tokayev.

Earlier this week, President Tokayev announced that citizens will vote on the amendments at a referendum, instead of the parliamentary vote expected by many experts as it would exclude any serious challenge to his initiatives in the legislature dominated by the Amanat party which supports him. The draft law that includes these amendments and that will be put on the vote was approved by the Constitutional Council on Wednesday.

Some major amendments include limiting presidential powers, giving more power to the Parliament, and making it more representative of the country’s 19 million population through replacement of the proportional system of elections with a mixed majoritarian-proportional one, as well as significant decentralization of power with more competences given to regional and local authorities, consolidation of human rights protection mechanisms, including the Ombudsperson’s office, and the establishment of the Constitutional Court.

Kazakhstan held its last referendum in 1995 when it adopted the current Constitution. Since then, four packages of amendments have been introduced to the Constitution, but all of them were made through holding a vote in the Parliament.

“Amendments to the basic law are, in fact, momentous for our country. Changes will affect one-third of the Constitution. Frankly speaking, our Constitution will get an entirely new dimension. That is why I proposed to put the issue to a national referendum because such large-scale changes must be decided by the people’s will,” he said.

The referendum is common practice around the world, but in Kazakhstan, this mechanism was not used to the full extent, according to the President.

“The upcoming referendum on constitutional reform will create a legal basis for the Second Republic – a new, more effective, and balanced model of relations between the state and society,” said Secretary of State Erlan Karin.

According to him, the referendum on constitutional reform is the next stage in the implementation of the presidential program of political reforms.

“The program has systemic nature and includes the final transition from the super-presidential model to a presidential republic, the redistribution of a number of powers, strengthening the role and status of Parliament, expanding public participation in governing the country, and strengthening constitutional mechanisms to protect the rights of citizens,” he said.

All the details regarding the referendum, including the composition of territorial and precinct referendum commissions, and information about the location and working hours of the commissions, will be published in the media not later than May 15, according to the law.

Starting May 20, citizens will be able to check whether they are on the lists eligible for participation. They will be notified about the time and place of voting at least ten days before voting day – no later than May 25.