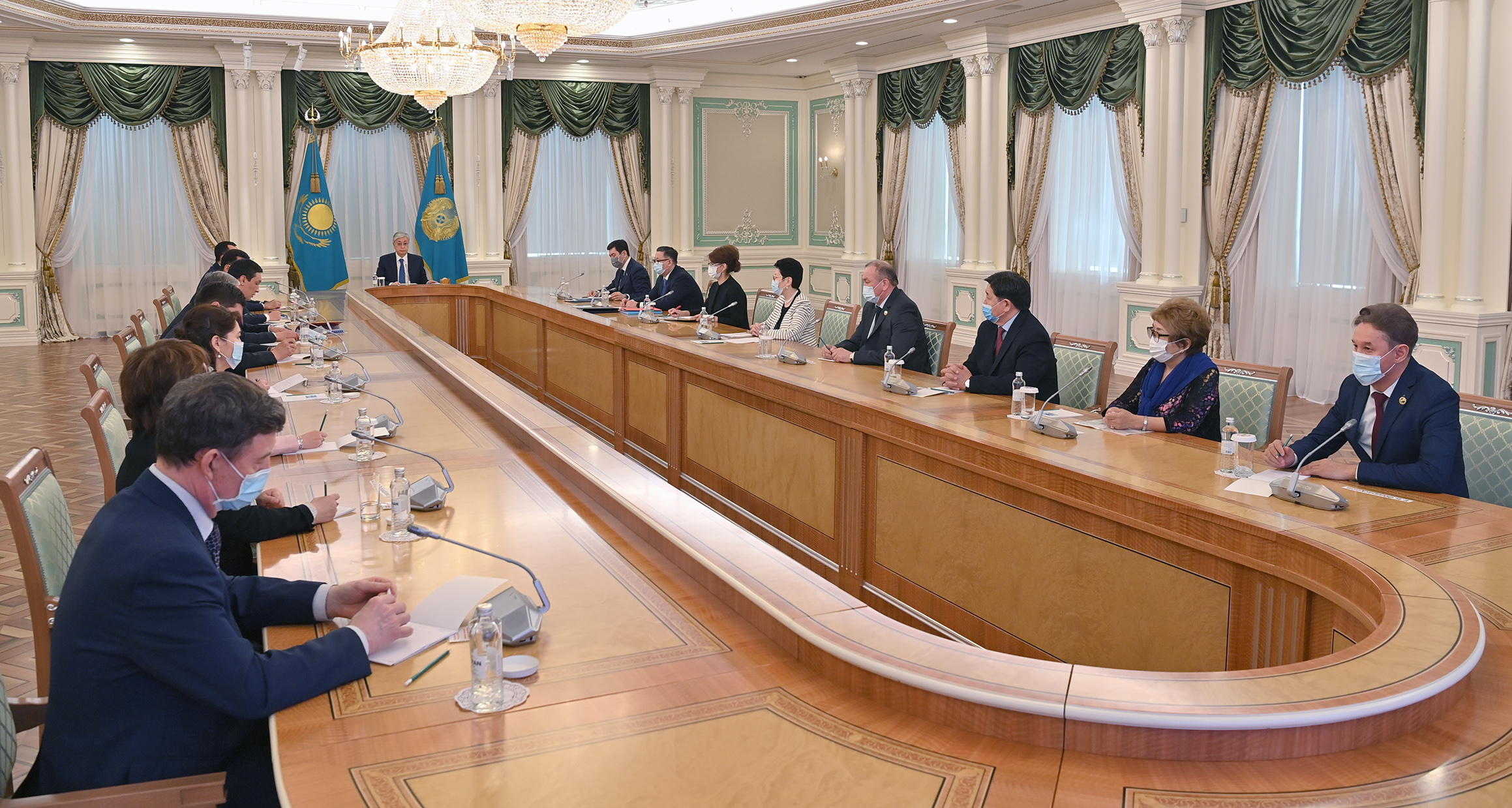 Tokayev with Constitutional Council’s members during meeting on the amendments on April 22 in Akorda presidential residence. Photo credit: Akorda Press

On April 22, President Tokayev submitted the draft bill to the council, a procedural move required by the law. The amendments will affect 33 articles, more than a third of the country’s main document.

“I am sure that the amendments to the Constitution will open a new chapter in the history of independent Kazakhstan. This is an important milestone in building the New Kazakhstan,” said Tokayev addressing the April 22 meeting on the amendments in the Akorda presidential residence.

The council’s conclusion says that the submitted draft law was developed in accordance with the presidential state-of-the-nation address from March 16 and the measures are oriented “towards a society that is now in the period of active transformation” and are designed to create a “solid political and legal foundation for the ongoing reforms.”

Some major amendments include limiting presidential powers, giving more power to the Parliament, and making it more representative of the country’s 19 million population through replacement of the proportional system of elections with a mixed majoritarian-proportional one, as well as significant decentralization of power with more competences given to regional and local authorities, consolidation of human rights protection mechanisms, including the Ombudsperson’s office, and the establishment of the Constitutional Court.

“The modernized presidential form of government will ensure an optimal balance of power institutions and will contribute to the sustainable development of the country. The draft law clarifies the powers of the head of state, strengthens the role of Parliament and maslikhats (local legislative bodies), which will be an important factor in the successful implementation of a listening state concept,” said the council.

The council emphasized that the draft law strengthens the guarantees of local government and self-government and ensures greater protection of human rights.

While the approval of the draft law by the council was more of a formality, it is one of the most important stages in the implementation of the constitutional reform.

Karin said there was an additional appeal sent by a working group to exclude the provisions regarding the status of the First President. Nursultan Nazarbayev held the status of Yelbasy – leader of the nation – which granted him and his close family members a lifetime immunity from prosecution and control over core matters of state.

When adopted, the amendments will exclude this status from the Constitution and only preserve Nazarbayev’s status as the founder of the state. The constitutional law on the first president will automatically cease to be in effect.

“According to the members of the working group, the historical role of the First President is well known and does not require separate enshrinement in the Constitution,” Karin wrote on his Telegram channel.

Earlier this week, President Tokayev announced that citizens will vote on the amendments at a referendum, instead of the parliamentary vote expected by many experts as it would exclude any serious challenge to his initiatives in the legislature dominated by the Amanat party which supports him.

“I believe that amending the Constitution through a popular vote will be a vivid demonstration of the will of the people,” he said.

Kazakhstan held its last referendum in 1995 when it adopted the current Constitution. Since then, four packages of amendments have been introduced to the Constitution, but all of them were made through holding a vote in the Parliament.

The date has not been announced yet, but in accordance with Kazakhstan’s laws, the referendum may take place in a period between one and three months following its formal approval by the President.