By Assem Assaniyaz in International on 21 May 2022

NUR-SULTAN – According to the ICAO (International Civil Aviation Organization) audit results of 2021, Kazakhstan’s aviation safety score remains at 84 percent. The country’s rate is 15 percent higher than the global average. This data was presented by the Kazakh delegation at the May 17 meeting of the European Union Air Safety Committee (ASC) in Brussels. 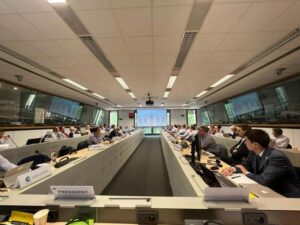 The Kazakh delegation, including Civil Aviation Committee Chair Talgat Lastayev, Advisor to the Minister of Industry and Infrastructural Development Azat Bekturov, Director General of the Aviation Administration Catalin Radu, representatives of the Kazakh Embassy in Belgium and Air Astana national carrier, also reported on progressive flight safety measures taken in the country. The participants of the ASC session consisting of heads of aviation authorities of the EU 27 member states commended Kazakhstan’s accomplishments.

ICAO carried out the audit from Aug. 2 to Aug. 11, 2021, under the ICAO Coordinated Validation Mission as part of the USOAP (Universal Safety Oversight Audit Program). The USOAP monitoring allows ICAO to assess a state’s capability in providing safety oversight by evaluating the implementation of the eight critical elements (CEs), including licensing, certification, authorization, resolution of safety issues, and surveillance obligations. It revealed Kazakhstan’s significant improvement in compliance with ICAO standards from 87 percent to 95 percent with an average flight safety level of 84 percent.