By Assem Assaniyaz in Constitutional Referendum, Nation on 31 May 2022

NUR-SULTAN – Some 83.92 percent of Kazakh citizens support the presidential initiative to hold the June 5 national referendum on amendments to the Constitution, according to the Central Communications Service (CCS) online survey conducted from May 24 to May 29. 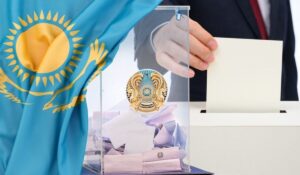 The national referendum on amendments to Kazakh Constitution will be held on June 5. Photo credit: ortcom.kz

This means an increase by 12 percent as compared with the previous poll results provided by the CCS in mid-May – 72 percent. Overall, the level of public awareness of the upcoming event has grown by eight percent.

Now, 76.51 percent of the respondents intend to vote in the referendum, 79.10 percent support the proposed package of constitutional amendments, and 80.04 percent approve of the course of  reforms initiated by President Tokayev.

The recent survey was conducted among 1,200 citizens from 17 regions of Kazakhstan over the age of 18.

The citizens eligible to vote will be able to cast their ballots in one of 10,013 polling stations that will open on the referendum day.

The adoption of amendments to 31 articles and addition of 2 new articles to Kazakh Constitution will allow people to expand their participation in state governance and ensure genuine democratization of political processes, including the transition from a super-presidential model to a presidential republic, redistribution of powers, strengthening the role of Parliament, as well as reinforcing mechanisms for protection of citizens’ rights.